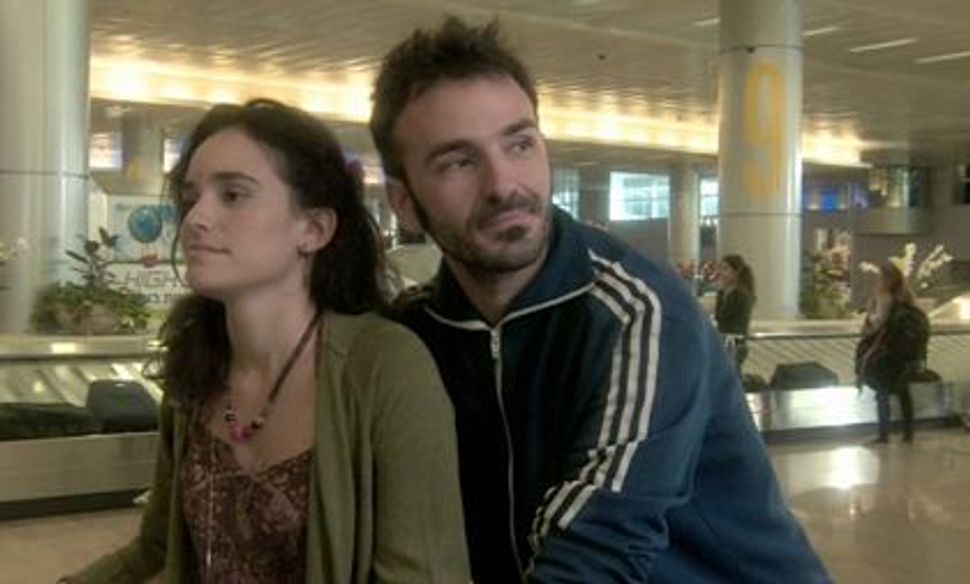 Yeroslavsky — a 28-year-old graduate of the Sapir College film and television program — has chosen an idea that will strike a chord with many Israelis trying to find their place in the world.

“Forced Landing” focuses on four protagonists — Arye, Na’ama, Josh and Eran — who are all try to find greener pastures abroad, only to return unexpectedly home.

The characters’ attempts to pick up their Israeli lives where they left them provide the drama while organically integrating real social issues. The realistic feel is helped both by the acting of the fresh and youthful cast, as well as by good screenwriting that preserves the flow and banter of everyday conversation. The mix of recognizable B-list Israeli actors like Benny Izrael (playing Eran) and singer/actor Oshik Levy (Arye’s father), as well as a larger crew of newcomers such as Anael Blumenthal (Na’ama) and Zohar Sabag (Josh) adds to the feeling that you are watching people you have met in real life.

In a phone intervew with the Forward, Yeroslavsky explained that the show’s characters are based on the real life experiences of himself and others Israeli fun and fortune-seekers. “I went to Australia for over a year,” he recalled. “First Sydney for a while and then I worked at a cafe in Melbourne. I was also in India for a bit.”

Yeroslavsky continued: “When I eventually returned to Israel I had a hard time adjusting back to life here. I would regularly go to this bar where I would meet people who were in the same sort of a situation… Sometimes an acquaintance would say something like, ‘in Canada I made good money and everyone who worked in agalot [the pushcarts selling Ahava skincare products] knew who I was. In Israel I can’t even find a job.”

“I realized a lot of us were going through the same thing, the same feelings. When I had to create a final graduation project at Sapir, it took me a long time to think of a topic. So I mentioned it to the people at the bar, and I thought to myself, ‘here is my idea for a show, these people!’ That was how the idea for the pilot was born.”

One of the most humorous part’s in “Forced Landing’s” first episode is when Josh, a musician and a dreamer who adapted almost too well to his English surroundings, returns to Israel to rekindle his romance with a long-lost flame. Josh shamelessly attempts to start a conversation with the new tenant he discovers in his ex’s former apartment. “Sorry, I’ve come all the way from England. Can I at least come in for a cup of coffee?” Josh asks the young woman. She replies in the quintessential Israel manner, saying, “Well, sweetie, this isn’t England,” before slamming the door in his face.

Beyond the moments of humor and gems of dialogue, “Forced Landing” exhibits embryonic signs of a season-long story arc. When Arye picks up Na’ama hitchhiking towards the end, you can see the individual protagonists’ plot lines begin to interweave. The episode ends on a cliffhanger when the police pull over Arye and Na’ama to search for narcotics. The two main characters treat the cops jokingly until the police open the trunk of the car and Na’ama’s face morphs into a look of shock.

When asked about his characters’ — as well as his own — ambivalent return to their native land, Yeroslavsky summed up the feeling nicely: “Well, it’s hard in Israel, but there really is no place like Israel.”

Watch a trailer for ‘Forced Landing’: