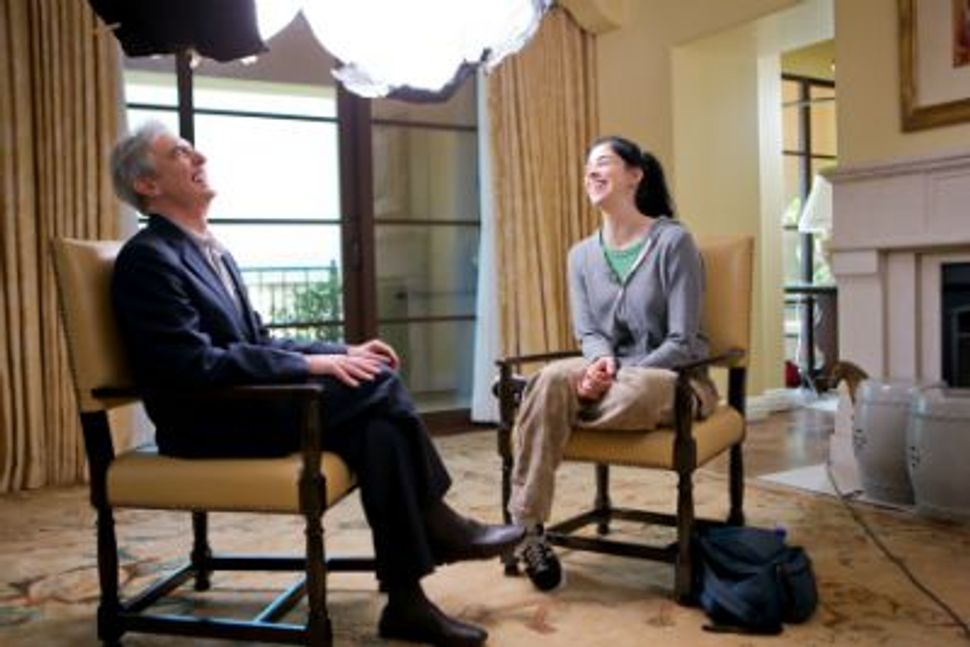 Steinberg with Sarah Silverman Image by Courtesy of Showtime

You can’t really say that edgy comic David Steinberg is back, because in truth he never really left. He just wandered off in a less visible direction, behind the scenes, as a director of commercials and television shows such as “Weeds” and “Curb Your Enthusiasm.”

In fact, he was in an especially cheerful mood on the day of this interview; he’d just received a Director’s Guild nomination for an episode of “Curb” that he helmed last season. But what Steinberg really wanted to talk about was his new weekly Showtime series, “Inside Comedy,” which debuted on January 26. In it, he interviews giants of the funny business — Seinfeld, Brooks, DeGeneres, Conway, Rickles and others — about their art.

Steinberg spoke with the Forward’s Curt Schleier about the show, a brief return to stand-up and his first job, teaching Hebrew.

Curt Schleier: How did “Inside Comedy” come about?

David Steinberg: It started as a film. Steve Carell [a co-executive producer] and I wanted to document the last five decades of comedy, and we asked [many of the greats] to participate. What we couldn’t get over is that everyone we asked said yes. So, after 10 months, we had a tremendous roster of eclectic interviews, but what looked to be a saving grace was a problem. We realized if we do this as a film, Mel Brooks will be four minutes and Chris Rock will be four minutes. So I sat down for seven months to edit and turn it into this show.

One of the things I noticed is that you don’t try to be funnier than the person you’re interviewing.

No, that’s never been my problem. I wasn’t the sort of needy comedian who needs to get the last laugh. I did make it into the conversation, but I found that when it was about me as much as the other person it felt wrong. I left a little of myself in, but not much.

Do you miss stand-up? Have you thought about going back?

You grew up in a Jewish area of Winnipeg. What was that like?

My father was a rabbinical graduate, and he ran this little shul. There were — and I’m not exaggerating — six others in the area, one on every block. Canada is different from the States. It’s not a melting pot. You don’t have to be Canadian first and Jewish second. My father read the Forverts and a paper called the Morgen Journal. There was also the Yiddish Wort. This was the most literate group of people. Parents told their children one thing: Study and become something. It’s amazing what my group has done, become doctors. Not many lawyers, but quite a few PhDs.

How did they wind up in Winnipeg?

Clearly, my parents asked the Jewish agency that placed them to find something colder and more hellish than where they came from.

How did you get from Winnipeg into the world of comedy?

I attended yeshiva and then spent a year in Israel on a machon [education institute]. It was a time people weren’t going to Israel for bar mitzvahs. My parents were terrified. I returned and attended the University of Chicago and taught Hebrew. Then I saw a Second City performance and followed them like a kid follows a circus. I realized I do what they’re doing. It gave me an identity.

Why are there so many Jews in comedy?

Someone asked me that at TCA [the Television Critics Association], and to be funny I said, it’s because Jews are smarter. I got a lot of feedback about how arrogant this was, but I feel safe in my prejudice.