At the ‘Footnote’ Oscar Viewing Party 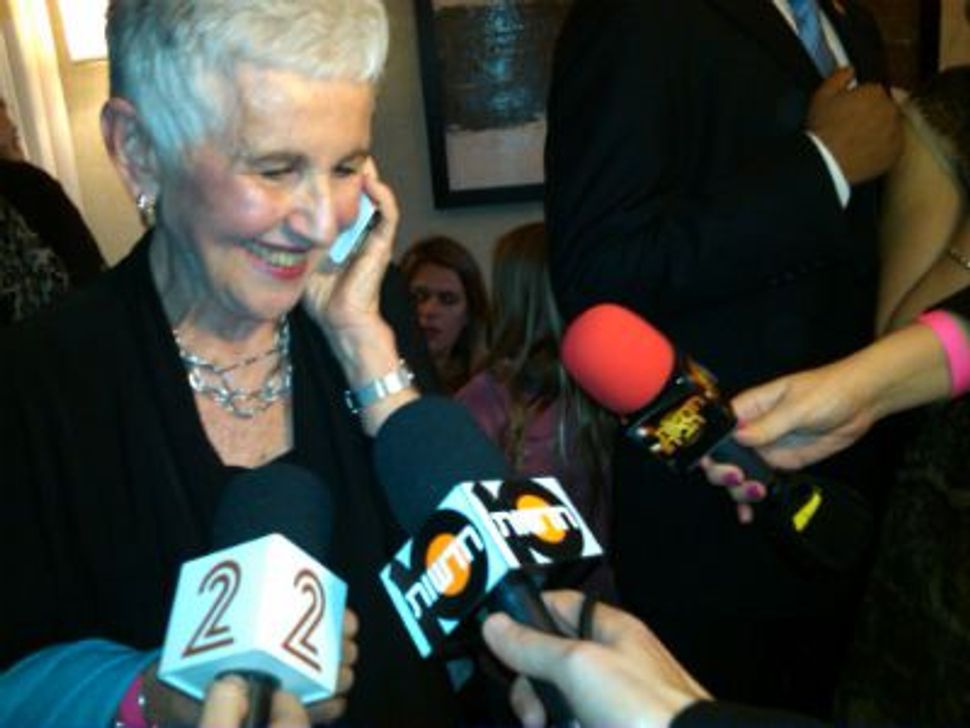 At an Academy Awards viewing party sponsored by the Israeli Consulate together with the Israeli Leadership Council at the Luxe Hotel on Sunset Boulevard, the moment when the Iranian film “A Separation” won the Oscar was greeted by a heartfelt moan. “Footnote,” the comic drama directed by Israeli filmmaker Joseph Cedar about a pair of father-and-son Talmudic scholars, had failed to snag the Best Foreign Language Film Oscar in Israel’s 10th Academy Award nomination in the category.

But not everybody took the loss as hard.

“It doesn’t matter as long as he can create that’s all that I care about,” Tipi Cedar, mother of the 44 year old Orthodox filmmaker, told the Forward. “He’s a mensch.”

Tipi and her husband Chaim were in town for their second Oscar visit. Their first was for their son’s nomination in 2007 for “Beaufort.” On that occasion, the couple actually attended the ceremony at the Kodak Theater, using a strategy that Chaim, a biochemist, divulged to the Forward involving certain Hollywood doctors whose Academy-member patients happened to be ill, thereby freeing up the much coveted tickets.

At a pre-Oscar party Friday night, writer/director Joseph Cedar told the Forward that he was pleased to be attending his second Academy Awards ceremony, but expressed some anxiety; with two nominations for and four Academy submissions by Israel, perhaps his popularity meant he was not “edgy” enough. Michael Barker, co-president and co-founder of Sony Pictures Classics, the film’s US distributor, assured the filmmaker that frequent nominations were a good thing, citing as an example Woody Allen, a 23-time nominee (and three-time Oscar winner) in various categories. Cedar perked up when he learned that Allen was going to screen “Footnote” privately before the film’s March 9 opening in New York.

Sony Pictures Classics, which over the years has now won 12 Best Foreign Language Film Oscars, was the big winner in the category, pushing two other nominees vying with Footnote including the winning Iranian entry and “In Darkness,” a Polish film about the Holocaust. Barker told the Forward that he believes that “Footnote” has “crossover potential” and that Sony’s aggressive publicity campaign and screening schedule on both coasts for Academy members is a post-Awards release strategy aimed at maximizing the film’s appeal to mainstream audiences.

Israeli Consul General David Siegel, spoke to the crowd once the Oscar race had been decided, hailing the film’s achievement and promising more to come from Israel’s film industry. “We’re known as people of the book,” he said, “but we’re also people of the film.”

Meanwhile, Hollywood-based people of the film marked the return to top form of Harvey Weinstein whose film “The Artist,” swept the ceremonial tributes with five wins, including Best Picture. The Weinstein Company, successor to Miramax, the powerhouse indie company built by Harvey and his brother Bob before selling out to Disney, was rumored to be in financial straits only a year ago. “The Artist” has earned $31,874,000 to date at the US box office, and is set to rake in more cash on top of its Oscar gold.

At the ‘Footnote’ Oscar Viewing Party