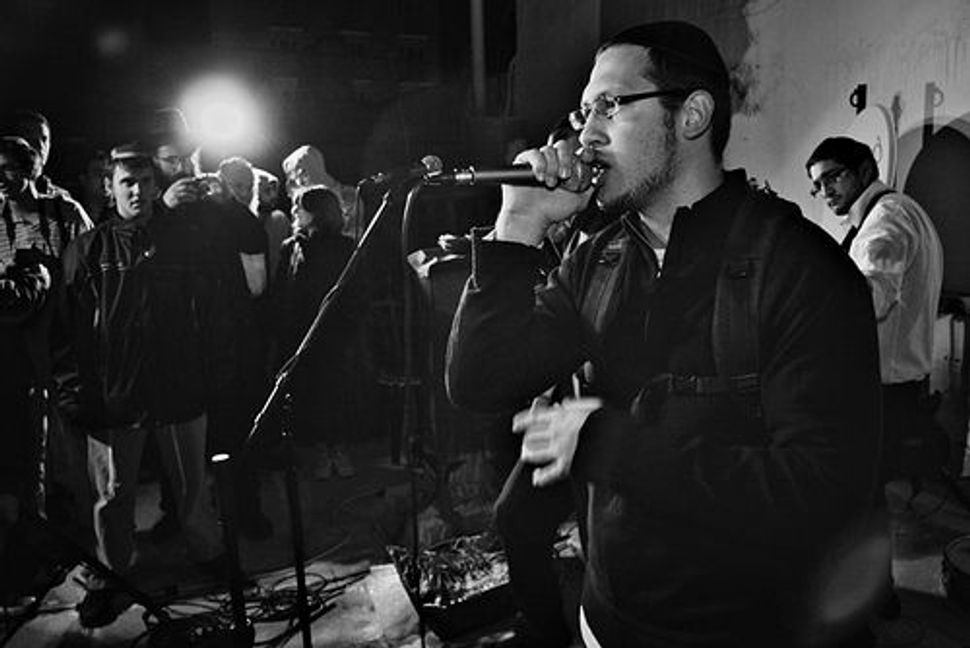 A lot of my favorite music could be described as religious hip-hop. It probably has to do with my obsession with the Dirty South, even though all of that music is Christian. Take “True Hero Under God” by Z-Ro, which includes lines like “But I am just a man, trying to Satan free / Through hell, is where they’re taking me.” At least he only refers to Jesus once, so I can pretend I’m not being preached at. But in most of this music the theology is about sin and Satan and salvation through prayer. I can relate to the person singing the song, but I don’t want to relate to the message.

Now I’m listening to “Infinity,” the first album by the nice Jewish boys in Shtar. “Infinity” is religious. Song titles include prayers like “Adon Olam,” “Kel Adon,” and “Shir Hamaalos.” But is this just rap for rabbis?

The first thing that comes across on this album is that every song is about God. Every verse is about God. God is for Shtar like “the trap” is for Young Jeezy, which makes sense. The Orthodox lifestyle, with its routines of prayer and study, is pretty all encompassing. And I can’t really expect guys from rabbinical school to make strip club anthems or sex jams.

Instead, Shtar songs have their own formula. They feature a melodic, live-band beat, a smooth vocal hook, usually in Hebrew, and a sophisticated “smart guy” rapping. “Adon Olam” sounds a bit like the classic “Hotel” by Cassidy and R. Kelly, but there will be no “after party one bed for freak on” nonsense here. MC Ori Murray raps “the King is back, he never left, and you’ll be feeling that / you’ll be seeing that,” and he’s not talking about a god of the mic.

This is the odd part of Shtar’s music — it has none of the egocentrism of hip-hop. This can be a good thing. It’s cool that they’re making music about what they care about, and in terms of Jewish rappers, I’d rather listen to Shtar drop knowledge than to hear Drake say something lame about his “struggle,” which doesn’t exist. (Listen to the verse on “Shir Hamaalos” about the redemption from exile: “When will Hashem return us to Zion so we can be like dreamers again?” I agree.)

At the same time, the songs here don’t have the introspection that other religious acts, like UGK and Z-Ro, bring to the table. It can be hard to hear the people behind the songs. That may be my American bias — Judaism isn’t caught up on men of constant sorrow like rural Christianity is. On the other hand, so many great Jewish musicians are able to take their music to some dark places emotionally — take Bob Dylan’s “Idiot Wind” or Leonard Cohen’s “Last Year’s Man.”

Don’t get it twisted, every track here is great. The production is superb, the rapping subtle, with a different flow for every beat, and the messages are thought out. I can definitely see myself playing any of these tracks early in the morning, when I’d rather hear spiritual and Jewish than grimy. For the Orthodox hip-hop fan or the older head who has gotten tired of the usual tropes, this is a good buy.