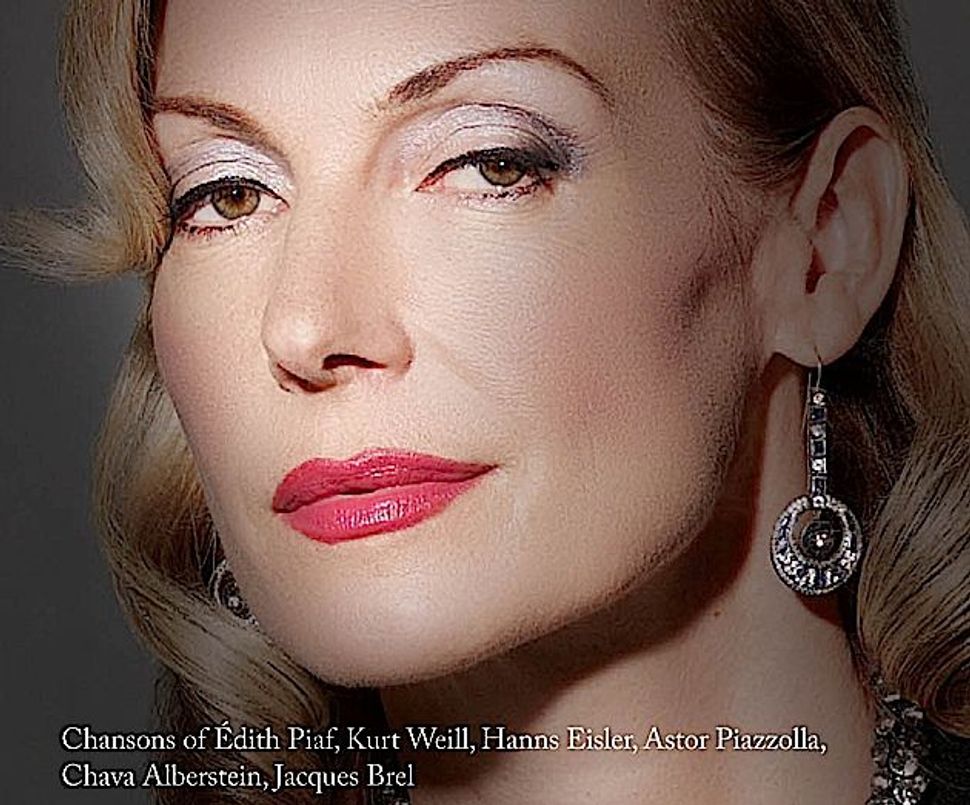 What?s the Fastest Way to Carnegie Hall? Perhaps going to see Ute Lemper at Zankel Hall on April 5. Image by courtesy of utelemper.com

Approaching springtime should make New York-area music lovers in search of Yiddishkeit look beyond the obvious choice of Felix Mendelssohn, famed composer of the “Spring Song.” On March 20 at The Austrian Cultural Forum, ardent modernist songs by Arnold Schoenberg and Alexander von Zemlinsky will be performed by mezzo-soprano Brenda Patterson and soprano Katharine Dain with pianist Thomas Bagwell.

Also far from mid-Victorian sweetness is “Music for Strings” by the American Jewish composer Edward T. Cone, as played by The New Jersey Symphony Orchestra from March 22 to 25 in Newark, Princeton, and New Brunswick. Conducted by Jacques Lacombe, Cone’s “Music for Strings” has moments of creative agitation and tension, as indeed does spring.

Missing Mendelssohn already? On March 23 at Weill Recital Hall, The Elias String Quartet, a Mancunian ensemble named after Mendelssohn’s oratorio “Elijah,” plays that composer’s String Quartet No. 2 with a repeat performance on March 25 at The New School’s Tishman Auditorium.

On March 24, it’s back to the 20th century at Carnegie Hall, with the world premiere of an orchestral suite drawn from Leonard Bernstein’s one-act opera “Trouble in Tahiti,” arranged by Paul Chihara and performed by the Orpheus Chamber Orchestra. Aaron Copland’s “Appalachian Spring” is also on the program.

More Copland may be heard on March 25 at Symphony Space when the Indiana University of Pennsylvania Orchestra led by David Martynuik plays his “Suite from ‘The Red Pony,’” as well as Mahler songs — some aptly estival ones from Des Knaben Wunderhorn — sung by soprano Mary Logan-Hastings and bass Joseph Baunoch.

Those still jonesing for Mendelssohn can get their fix on March 25 at Alice Tully Hall from a program of Felix’s vocal duets with tenor Michael Schade, bass-baritone Luca Pisaroni and pianist Justus Zeyen.

On April 5 at Zankel Hall, the cabaret star Ute Lemper shines in a program of songs by Kurt Weill and Hanns Eisler, backed by the Vogler Quartet. On April 15 at Town Hall, pianist Jonathan Biss plays “Lunaire Variations” by David Ludwig, a new work in tribute to Schoenberg’s cabaret-melodrama “Pierrot Lunaire,” proving that there is no Mendelssohnian monopoly on Jewish spring songs.

Listen to the Melos Quartet perform part of Mendelssohn’s “String Quartet No. 2.”