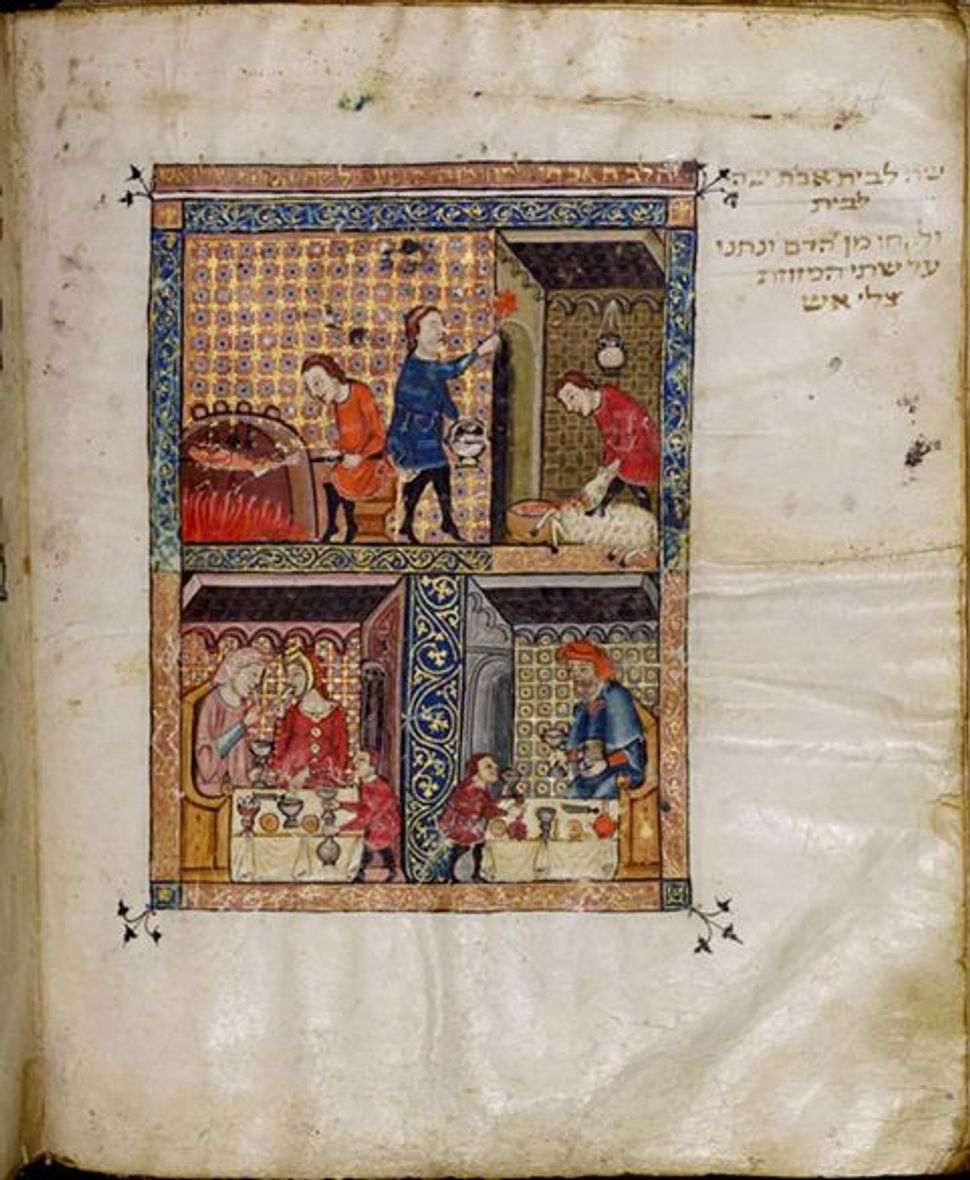 Each Haggadah tells not just the story of the exodus of the Israelites from Egypt, but also the story of its owners. Containing worn, loose or torn out pages, covered with wine stains and littered with matzo crumbs, the Haggadah reflects how Jews celebrate the yearly rituals of the Seder night.

This year, The Metropolitan Museum of Art in New York is getting into the Passover spirit with “The Rylands Haggadah: Medieval Jewish Art in Context,” a new exhibit showing a “priceless” medieval Haggadah.

The Rylands Haggadah, on loan from the University of Manchester, England, hails from Catalonian Spain and dates from the mid-1300s. It is being displayed alongside other medieval works of art that tell stories of the Jewish people in the Bible.

The illuminated manuscript, made of tempera, gold and ink on parchment, is open to a page showing two scenes: The first depicts the Israelites in Egypt heeding God’s command to slaughter a lamb and mark their doorposts with its blood so as to be spared from the slaughter of the first born. The second shows a medieval Passover Seder, with the figures participating in all the familiar Seder night rituals. We see them gathered around a table with the Seder plate taking the central position. In one frame, they are drinking the first of the four cups of wine; in another, they are dipping bitter vegetables in salt water.

There is a strange feeling of déjà vu that comes from standing in the Met’s galleries, staring into a glass case at this ornate manuscript depicting scenes of Jews living over 600 years ago, enacting Passover rituals identical to the ones practiced today. It brings to life the biblical commandment reiterated in the Haggadah that in every generation one is required to regard oneself as if he or she had personally come out of Egypt. In the Rylands Haggadah you can see the direct continuity between the lives of medieval Spanish Jews and Jews in 2012 still enacting the very same rituals.

Thinking about the Haggadah this way makes it easier to see the figures in these pictures as real people, rather than abstract caricatures. Did their children also get fed-up halfway through the long recitation of the Exodus story and start running around the table? Did the father also prove he was macho by wolfing down a giant-sized portion of maror? Did one of the aunts also get drunk and silly by the time they reached the second cup of wine on an empty stomach? Looking at the Rylands Haggadah is to see ritual, memory and Jewish continuity enclosed in a glass case at New York’s most august museum.