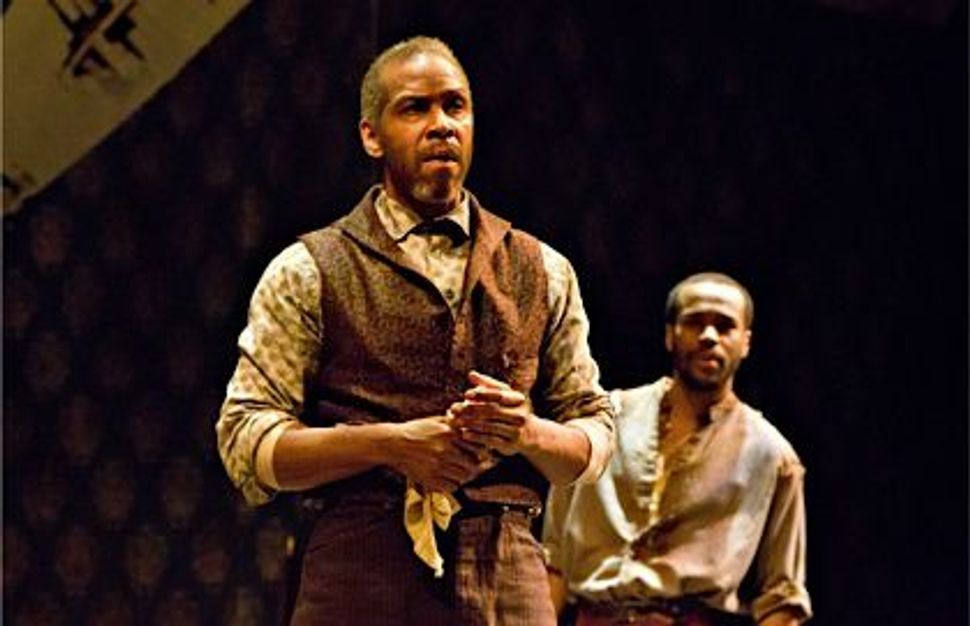 “The Whipping Man,” a taut Civil War drama about a wounded Jewish confederate soldier and his encounter with the Jewish slaves owned by his father, has been on a nationwide roll since its world premiere in 2006. With more than a dozen productions from New York to Tampa Bay, San Diego to Philadelphia, Cincinnati to Fort Worth, the three-character play by newcomer Matthew Lopez seems to have a leg up, literally. This month “The Whipping Man” is running both at Baltimore’s Centerstage through May 13, and in Washington, D.C., at Theater J, from April 18 to May 20.

This unusual confluence has allowed the two companies to share dramaturgical resources, and to engage in a bit of friendly competition. Centerstage’s new artistic director Kwame Kwei-Armah jokingly opined that because of its proximity, Theater J “will be able to steal the good bits of mine and make theirs better.” Kidding aside, both productions touch a chord, drawing back the curtain on the little-known and little-talked about world of southern Jewry during the Civil War, including confederate soldiers and, reputedly, slaves who practiced Judaism. The play, opening in the waning days of battle, also has a gory coup de theatre to keep audiences riveted.

“This is a play we could not say no to, hard as we tried,” chuckled Theater J artistic director Ari Roth. Jennifer Nelson, the founding artistic director of African Continuum Theater in Washington, D.C., who is directing Theater J’s production, enumerated a few of the reasons, starting with the fact that it’s a small play with three strong lead roles, two for African American men. She added: “The Civil War is an era that Americans have continued interest in … it’s our seminal moment in American history when we had to decide what our nation was going to be: one that allows freedom for everyone, or one that will remain stricken under the purview of race and class.”

In Baltimore, London transplant Kwei-Armah admitted that he wishes he had written “The Whipping Man” himelf, “because it examines slavery and the first days of freedom in an interesting and new way.” Also a playwright, Kwei-Armah said: “Its take on the Civil War, its take on the first days of freedom, its take on inherited faith, its take on what it is to negotiate tomorrow, and its original take on slavery — all these at once really make it appealing to audiences.” With Caribbean roots — Kwei-Armah’s parents are from Grenada — he said that the play’s context spoke directly to him. “It’s in my very DNA to say negotiation with slavery is present. Slavery spawned from the same head whether in England or America … the only difference is that our labor, our tool, was sugar and the tool here was cotton.”

Nelson was moved by the onstage Seder conducted in the war’s immediate aftermath. Aside from being seasonally appropriate, she said, “The playwright’s realization that Abraham Lincoln died during Pesach … wow what great background. There was a lot of research and a lot of imagination, so [a seder] doesn’t seem implausible. For me the big issue is that it is a story that both African Americans and Jews can say, yes, we were both here in this seminal moment in American history, it was our history, too.”

While the Jewish character is not the play’s hero, Roth noted that this should not be a provocative play for the Jewish community: “It’s about an inheritance, a spiritual inheritance and religious one, what we beget. Both directors have wonderful things to say about why and how they are engaging as African Americans in an aspect of Jewish history.”