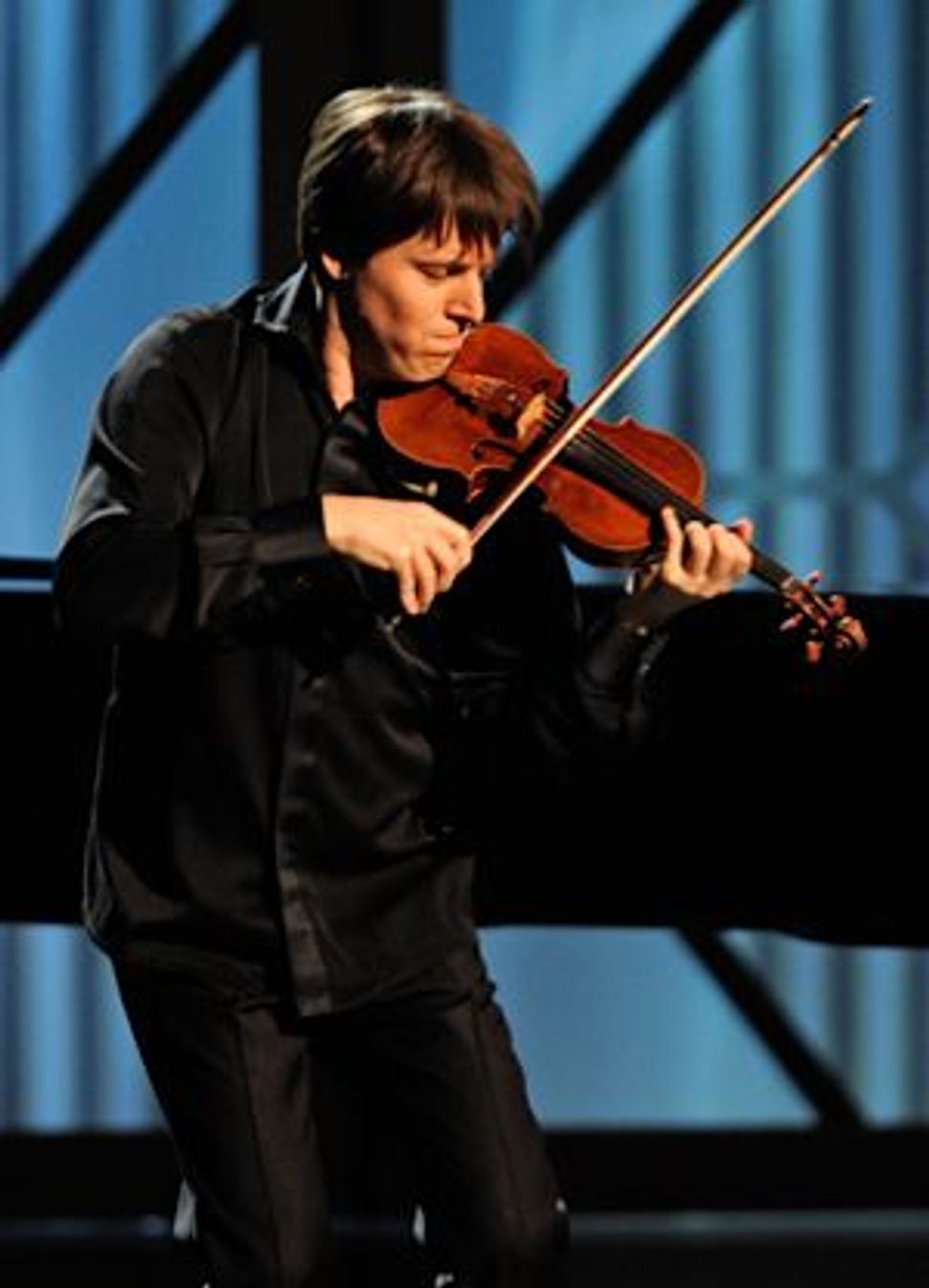 Bell, age 44, is known for his athletic style of playing. He is currently in the middle of a 15-city U.S. tour, which included an April 16 performance at Philadelphia’s Kimmel Center as music director of the renowned Academy of St. Martin in the Fields, one of the world’s most celebrated chamber orchestras. After his performance in Philadelphia, where he performed Max Bruch’s Violin Concerto No. 1 in G minor, the audience, which included many young musicians, stood in line for more than an hour to say hello and have him autograph CDs and programs. He talked to The Arty Semite about what he’s got on his iPod, playing vs. conducting, and almost losing a $4 million violin.

Laura Goldman: How does it feel to replace Sir Neville Marriner as music director of the Academy of St. Martin in the Fields?

Joshua Bell: It has been pretty scary and daunting to take over this great orchestra and tell these esteemed musicians how I want to play the music, but there has been good chemistry. I actually think there is an advantage to not getting up and leading with a baton. I am very aware of every musician. There is no middleman. I am still able to give them information from my chair. Playing my own part adds to the musical experience. It is a more organic, engaged and visceral.

How has conducting changed your playing?

Although it requires juggling, I believe that my playing has been enhanced by my conducting.

What is your relationship with the Israeli Philharmonic?

It is a wonderful orchestra. My grandfather was Israeli so I enjoy playing with the Philharmonic. After I bought the Gibson Huberman Stradivarius, our relationship got warmer. They appreciated that I honored their founder.

What is it like to play a $4 million violin?

It’s been my companion for many years now. As with any relationship we’ve had intense moments, including an incident in Chicago when the bridge fell apart during a performance of the Tchaikovsky Concerto. There are some days when I just want to get rid of it. It’s not working with me the way it should, then, four days later, I completely fall in love with it again. It will start to cooperate, like this living thing. It’s a marriage of ups and downs, but it’s still a love affair.

The violin was famously stolen, twice, from Huberman. I heard that you almost lost it once.

Yes. Once I was so intent on having a hamburger at the In-N-Out Burger in L.A. that I momentarily left my 1713 Strad in the car in the parking lot. And I don’t have insurance for that!

What do you want the audience to take away from your performances?

While being faithful to the composer, what I want the audience to come away with is feeling like they have heard the most incredible piece ever and that I have given them their own personal connection to the work.

You recently released an album of Ravel, Franck, and Saint-Saens with pianist Jeremy Denk, and you’re working on a bluegrass album with bassist Edgar Meyer. What’s the connection?

I love playing Beethoven, Bach and Mozart, but classical music is more than that. It is 400 years of music and includes bluegrass as well as Gershwin. I do not want to be pigeonholed or stereotyped. I want to keep people guessing and play the music I like.

Edgar is in the studio now. I am really looking forward to seeing what he comes up with. This summer, we will be playing the Hollywood Bowl and Tanglewood.

What’s on your iPod?

My iPod is now my iPhone. I do carry headphones around. Sometimes I watch TV shows. I don’t listen to too much violin, but I do have [Jascha] Heifetz. I have the late piano sonatas, which I never get tired of; Beethoven symphonies; [works conducted by] Carlos Kleiber; Edgar Meyer. I occasionally put some jazz on there too.

What does the future hold for Joshua Bell?

I plan on doing more conducting. I’m also interested in pursuing composing and continuing to teach. I haven’t begun to scratch the surface of the great repertoire I would like to record. And I would like to be a better golfer and table tennis player. I believe in treating every day as if it is my last.