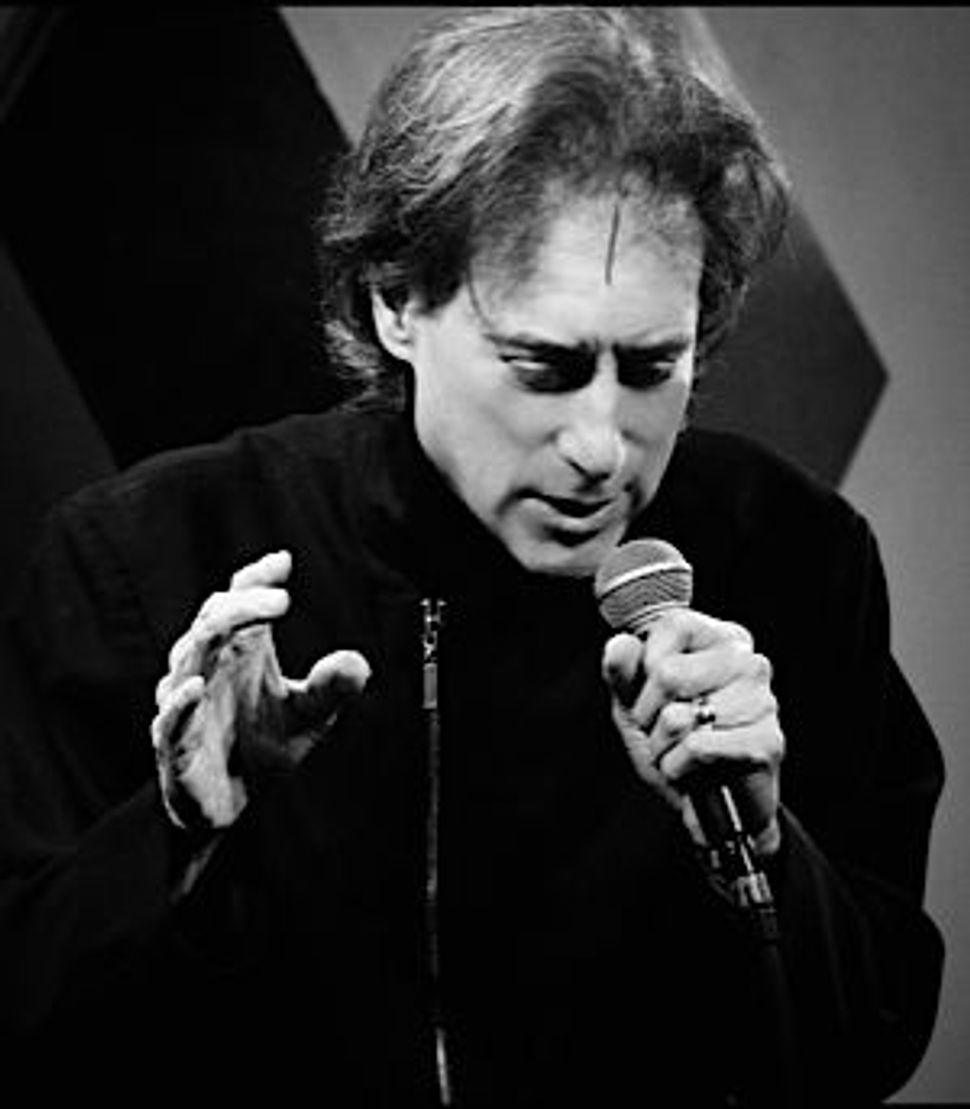 On “Curb Your Enthusiasm,” Lewis and David, who previously was the co-creator of “Seinfeld,” play sicker versions of Woody Allen’s classic Jewish neurotic. David appears as himself when he was a writer looking for work after “Seinfeld.” Lewis is David’s friend, which he has been in real life since they met at summer camp when he was 13. Lewis talked to The Arty Semite about Sid Caesar’s Seder, Being “Mr. Snickers” and what he talks about with his therapist.

Laura Goldman: Will there be a 9th season of “Curb Your Enthusiasm”?

Richard Lewis: I really do not know. I saw Larry the other day, but he did not say anything and I would never ask. He will tell me when he is ready.

Can you describe your relationship with Larry?

We play old best friends on television. We pretty much have the same relationship off camera except there is more hyperbole on camera. I took him out for his birthday this year. Even though the restaurant had a valet, Larry David, a multi-millionaire many times over, parked at the meter. He ordered a chef salad. When I was thanking him for our wonderful friendship as I was giving him his present, which was Yankee Mickey Mantle’s cufflinks, I noticed that he was not listening to me and kept looking at his watch.

He told me that he had to go because he was parked at a meter and did not want to pay a ticket. Our lunch lasted a total of 38 minutes. As he dashed out the door, I had to remind him that he forget his Mickey Mantle cufflinks. Another time, we were planning to get together for dinner at a Chinese restaurant. I asked Larry what time he wanted to get together. He said 4 pm. I finally convinced him to meet me at 6:15 in a long negotiation akin to a sidebar that a lawyer would have with a judge. The man that likes to eat early arrived 40 minutes late because of “traffic.”

Since I had eaten a late lunch, I wanted to order a light meal. Larry said, “I know the chef here. I would be embarrassed if we did not let him bring us what he likes.”

We end up being served a lazy Susan of 30 types of appetizers. Four minutes after the food arrives, Larry’s phone rings. He forgot that he had accepted an invitation to poker night at Steve Martin’s so he dashed out of there. Since I had already told the maître d’ that I was treating my friend Larry David, the mogul, I ended up paying for 30 dishes that we ate in five minutes.

My whole life is one big “Curbed” episode.

Where does the material for your comedy shows come from?

This is an example of how much real life intrudes on my act. When I did a routine about my doctor, I gave him a toupee for comedic effect. His mother called him and asked him if he wore a toupee.

I have about 100 pages of material stored on my computer. Before a show, I print out four or five pages to look at. I never know what I am going to say. It depends on what happened to me that day. The one rule that I have is that props are not allowed in the room.

Can you tell us about the Seder that you were invited to at the home of a Hollywood legend?

I was invited to the Seder at the comedy genius Sid Caesar’s house. At one time, he was the king of television. His show was the precursor to SNL. Actress Renee Taylor and her husband Joe Bologna were there. Joe is not Jewish, but he has been married to Renee so long that he knows all the songs and when to dip. Still, it felt like I was at the Seder with Tony Soprano. At the end of the night, Sid, who is 90, performed one of his old routines beautifully. You are friends with many older comedians. Why is that?

I am really grateful to the comedians that came before me. I learned a lot from them. I talk to Jonathan Winters every day. He is like a father figure to me. I used to visit Stan Laurel of Laurel and Hardy and stayed in touch with his widow when he died.

When I am older, I hope that Bill Maher and Jon Stewart will visit me.

Last year, you were in a Snickers commercial that premiered during the Super Bowl. How do you feel about being Mr. Snickers?

I love Snickers Bars and enjoyed making the commercial. It introduced me to a whole new generation. People wave at me all the time and yell “Mr. Snickers.” I just wish some would say, “I love your body of work.”

Being a neurotic, you are always worried about something. What is this week’s worry?

I have been going to the same therapist for 25 years. I have been seeing her so long that she should be able to speak Yiddish. I have never lied to her. She knows every dark secret of my horrible life. I worry about keeping it interesting. You can’t talk about your mother every week.

Everyone kept telling me I had to appear in Los Angeles so I rented out Club Largo. Stupidly, I emailed all my friends four months ago to tell them that I would be performing in Los Angeles, but that they do not have to come. Naturally, all of them are coming. This will be the first time that many of my friends have seen my act live. Since I destroy many of these people during my show, this could ruin me. They might walk out. I have already been to my therapist freaking out.