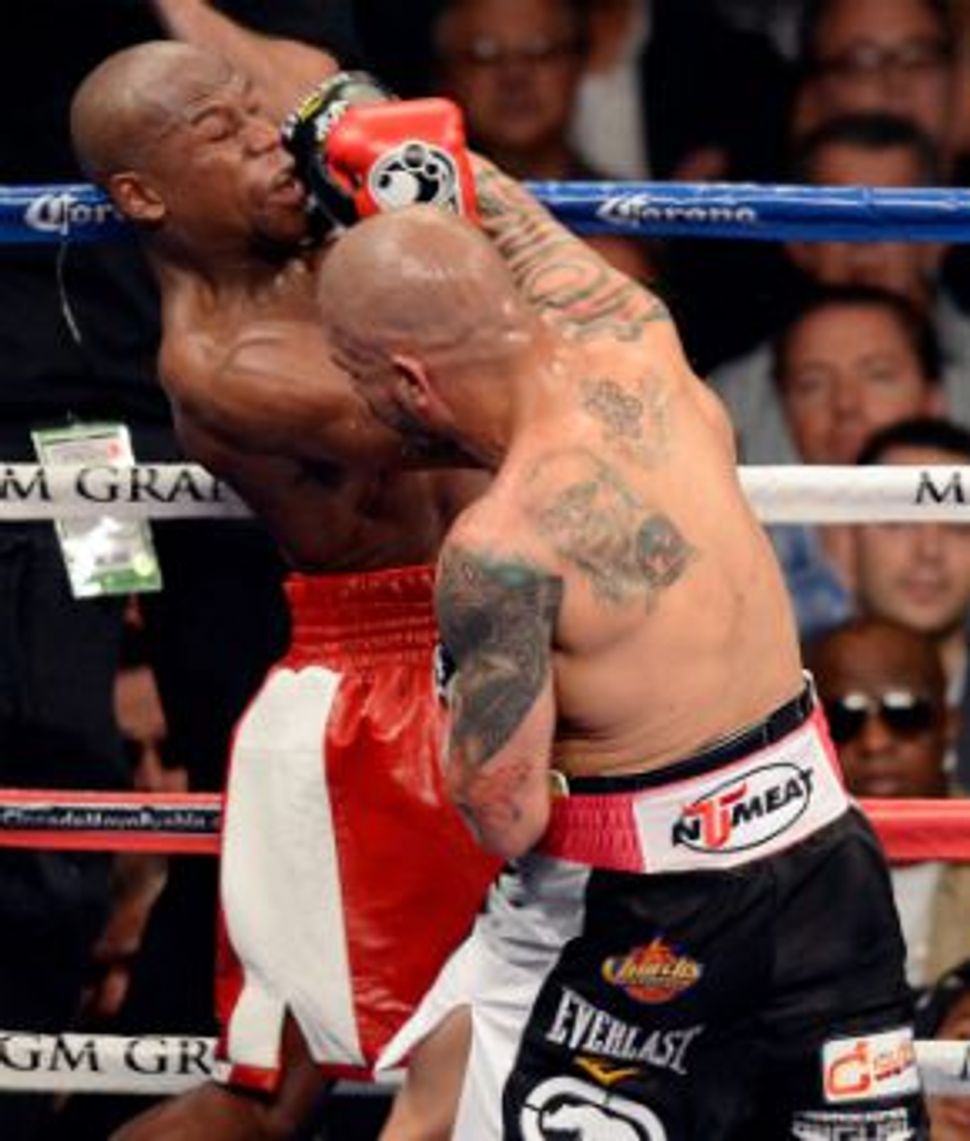 Cotto hits Mayweather during their WBA super welterweight title fight on May 5. Can you spot the OU tattoo? Image by Getty Images

While Puerto Rican boxer Miguel Cotto’s fight against Floyd Mayweather, Jr. this past weekend in Las Vegas was clearly fair (Cotto lost in a unanimous decision), Rabbi Jason Miller is questioning whether it was completely kosher.

Actually, the rabbi was concerned not about what went on in the ring, but rather about what Cotto was wearing in it. Cotto has been sporting an Orthodox Union kosher symbol (a circle with the letter “U” in the middle, often pronounced as O-U) tattoo for some years now. He apparently got it as a tribute to a Jewish friend.

Miller has no problem with the sentiment, but he is wondering whether there could be legal ramifications for the boxer’s wearing the hekhsher.

“Sue Fishkoff reported in her book ‘Kosher Nation,’ [that] the OU employs a large legal department whose mission is to locate violations of usage of the OU symbol anywhere in the world, issue a cease and desist order, and file a suit if there’s no compliance,” Miller wrote on his blog yesterday.

Miller went on to explain that the Orthodox Union usually goes after either companies that knowingly use the trademarked symbol, even though their product has not been properly supervised and certified, or businesses that accidentally create and use their own symbol that too closely resembles the OU’s.

But even for Jewish consumers consumed with boxing, there is little chance that Cotto’s tattoo would mislead them about what is proper or not to buy at the supermarket. Although the Shmooze enjoyed Rabbi Miller’s legal briefing, we’re happy to let Cotto dance like a butterfly in his boxing briefs — and his hekhsher tattoo, as well. We appreciate the sign of solidarity with the tribe, and it all seems pretty kosher to us.