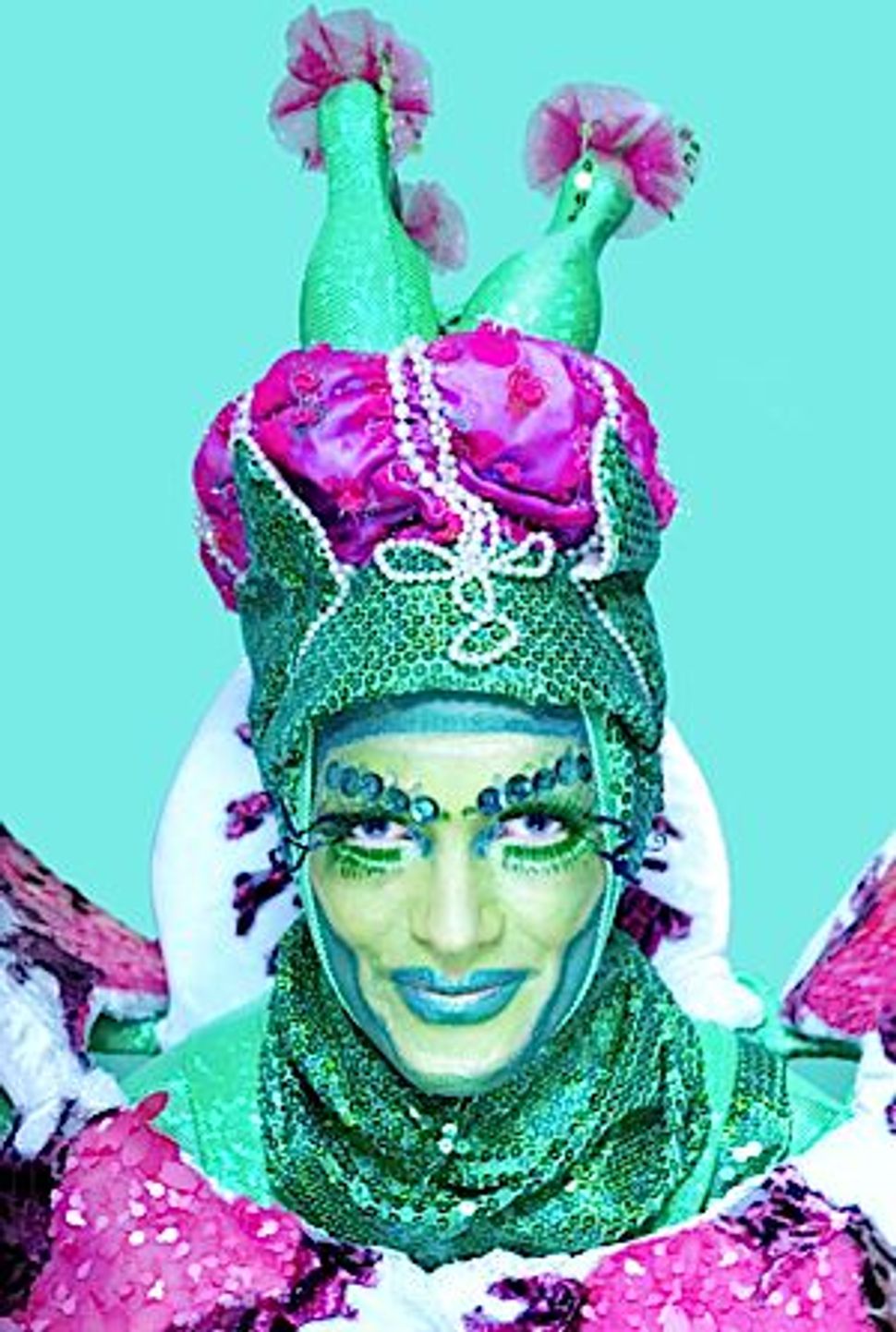 Since moving to Manhattan to launch his performing career 17 years ago, composer, playwright and actor Taylor Mac has graced stages from Sydney to Spoleto to San Francisco. But the Obie Award-winning artist has never been invited to perform uptown — until now. On May 24, at The JCC in Manhattan, Mac will premiere “Sleep Fast! We Need the Pillow!” an exploration of Jewish popular music and “tenement songs” from 1900 to 1910. It’s one slice of Mac’s insanely ambitious “A 24-hour History of Popular Music,” in which he plans to sing 300 songs from different eras for 24 consecutive hours sometime next year. The Arty Semite caught up with the bearded Mac — who’s been known to appear bewigged, painted blue, dressed as a giant flower, or all of the above — in the coffee bar of Manhattan’s Classic Stage Company, where he was performing as Puck in “A Midsummer Night’s Dream.” The Downtown doyen carried a copy of “Songs of Generations: New Pearls of Yiddish Song” under his arm.

Michael Kaminer: Can you explain the title of your JCC performance, “Sleep Fast! We Need the Pillow”?

Taylor Mac: It’s about the Lower East Side tenements. What interested me was that this was the first time I was being asked in 17 years to perform uptown. I perform all over the world. But in New York City, I feel very stuck in my ghetto, very segregated. My ghetto just happens to be the East Village and Lower East Side, where Jews all used to live in tenements. It’s ironic and beautiful that the first time I’m being asked to go outside my neighborhood is by a community that used to live in my neighborhood.

What distinguishes the work of Jewish songwriters in the period you’re covering?

A lot of them are klezmer. An interesting thing about popular music that I’m discovering — this project starts in the 1770s — is that a lot of it is appropriated. You’d take a melody like “Joe Hill,” or whatever, and write your own lyrics to it to work for your community. There’s a wonderful Yiddish song called “On the Rooftops at Night” that’s taken from old English songs, but the lyrics are so tenement. Being on rooftops so police can’t catch you there. Having a party because the hole in the wall where you live with your family is too oppressive. I love the combination of the English carousel melody that has nothing to do with Jewish culture at all, but when you throw these lyrics on them, it’s so beautiful.

You’re performing several songs in Yiddish, a language you’re just learning. How has that been?

It’s OK. I have a good ear for this stuff. But I’m so much about meaning; I always memorize things through meaning. If I don’t know exactly what a word means, if I don’t know what it means in my soul, it’s harder for me to remember. I’m trying to find my way through that. And of course you understand the song and the feel and humor of the song when you understand the Yiddish. They’re sad lyrics, but they’re so sad that they’re funny. The joy of them is “how sad can you be”? The sound of Yiddish brings the irony and range out. You don’t get that irony in English.

A statement on your website says “I believe my job as a theater artist is to remind my audience of the range of their humanity.” Do you think a Jewish audience has particular responses to that?

My goal is to get as many different kinds of people to get an understanding of what it is to be a human being, and discover their humanity. So the short answer is yes and no. You can’t sing a history of popular music without many songs by Jewish composers. To focus on a community is more interesting to me, and what it’s like to be an outsider observing that community, and what it feels like finding your way into that community, and sharing my own very queer, isolated community with that community.

In theater pieces like “The Lily’s Revenge,” “The Young Ladies Of,” and “Walk Across America for Mother Earth,” your outfits have included a giant flower costume and imaginative drag. What can we expect this time?

I have no idea. It depends on what [costume designer] Machine Dazzle does for me. He’s making a different outfit for every decade. When I told him I was doing songs from Jewish tenements, the light in his eyes sparkled. And that usually means trouble.

Do you think it’s significant that it took a Jewish institution to finally invite you uptown?

I do. I don’t think it’s a coincidence. These are observations from a WASP, but the Jewish community reaches out in the world. There’s a deep curiosity that keeps the community together. And the Jewish community is all different types of people, so they’re interested in all kinds of things. Being a WASP, growing up in that culture, it was very tight and fearful. It doesn’t branch out. It likes its categories. That’s not necessarily true for a minority group. Minorities are interested in other things, and they’re used to the world not being about them. All I know is that the most fabulous people in my life have been Jewish.