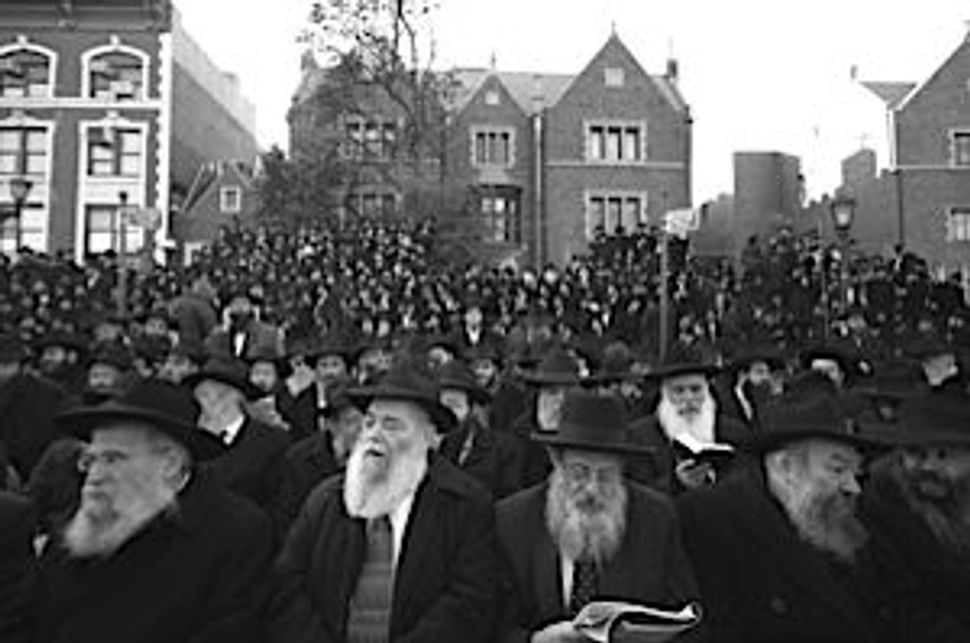 Only in New York would the German-born son of Colombian immigrants land a career retrospective of Jewish-themed photos at his homeland’s consulate.

Appropriately, “Only In New York” is the title of Julian Voloj’s new exhibit opening June 6 at the German Consulate in Manhattan. The show is touted as “an intimate portrait of a variety of Jewish communities, former Jewish neighborhoods, and expressions of identity” in his adopted home base. 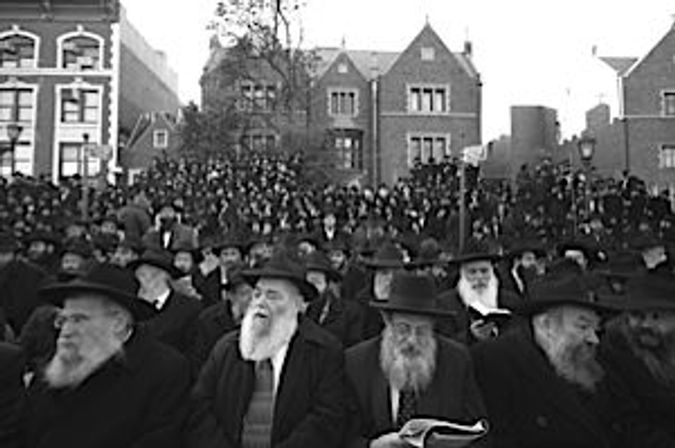 Voloj, 38, has built a flourishing career documenting global Diaspora culture since moving to New York a decade ago to pursue a relationship with then Forward reporter Lisa Keys, who had interviewed him as a German student leader. His beautifully composed black-and-white images have depicted black Jews in New York, Ethiopian Jews in their own land, and traces of vanished Jews in Germany’s Munsterland region, his birthplace. Forward readers may also recognize Voloj as the eye who captured prominent Jewish New Yorkers for the 2007 book “A Living Lens.” Voloj has also parlayed his perspective into JWalks, which offers Jewish-heritage walking tours of New York City neighborhoods.

Voloj and Keys now live in the Queens neighborhood of Long Island City with their sons, 4-year-old Leon and 2-year-old Simon. The Arty Semite caught up with Voloj as he prepared for the opening.

Michael Kaminer: Your new exhibit is billed as a retrospective. Aren’t you a bit young for that kind of treatment?

Julian Voloj: I moved to New York in 2003, and this year marks my 10th anniversary of photographing in New York. So it’s a good time to look back.

What does the title of the exhibit, ‘Only in New York,’ mean to you?

When I started discussing the exhibition with the Consulate, we decided to select only photographs taken in New York. New York is a very diverse place in general, and this is also true for its many Jewish communities. By exploring them, I was also exploring my own identity.

How does your perspective as an immigrant color your work about New York City?

In Europe, especially Eastern Europe, so many former centers of Jewish life have become places of pilgrimage for Jewish heritage tourists, while New York’s Jewish heritage, apart from the Lower East Side, is widely ignored. So, I used my European perspective and revisited the South Bronx, Brownsville, and other places, retracing Jewish heritage. I literally cycled the city street by street, exploring and documenting.

I’m also fascinated by Brooklyn’s Hasidic communities. With the exception of Antwerp, you cannot find a place like Borough Park anywhere in Europe. I always wondered what life in the shtetls of Eastern Europe was like, and I think witnessing their everyday life in Brooklyn gives us a little insight.

What is the significance of the German consulate hosting an exhibition that explicitly engages with Jewish heritage?

My whole life I have been building bridges. When I grew up, there were less than 30,000 Jews living in Germany, and for many, I was the first Jew they met. In New York, I am often the first young Jew from Germany people meet. When people hear the two words Germany and Jew, the first thing that comes to their mind is the Shoah, but people are surprised to learn about Jewish life in Germany today.

You grew up in Muenster, Germany, whose Jewish population is around 800 people. What was your experience growing up in such a small community?

When I grew up in Muenster, there were only around 80 Jews living in the city, so you always felt like the last remnant. So my life was a life of many firsts. My bar mitzvah was the first there in many, many years. When I did my [university entrance exam] in 1993, it was the first time since 1933, the year the Nazis prohibited it, that Jewish education was allowed to be part of the high school graduation process in the area where I lived.

I tried to live Jewish openly, to be a kind of role model, showing that there is “normality,” but in many ways, there was not. For most people, I was the first Jew they met, and there was always a lot of curiosity. From time to time there was anti-Semitism, but it was more the fact that people always saw you as the representative of Judaism and that you were forced into a role.

The Jewish community has changed significantly with the immigration of Jews from the former Soviet Union. There are now 10 times as many Jews, but I think in many ways, this problem has remained the same.

View a slideshow of photos from ‘Only in New York’: