Scribe vs. Scribe on Soccer Field 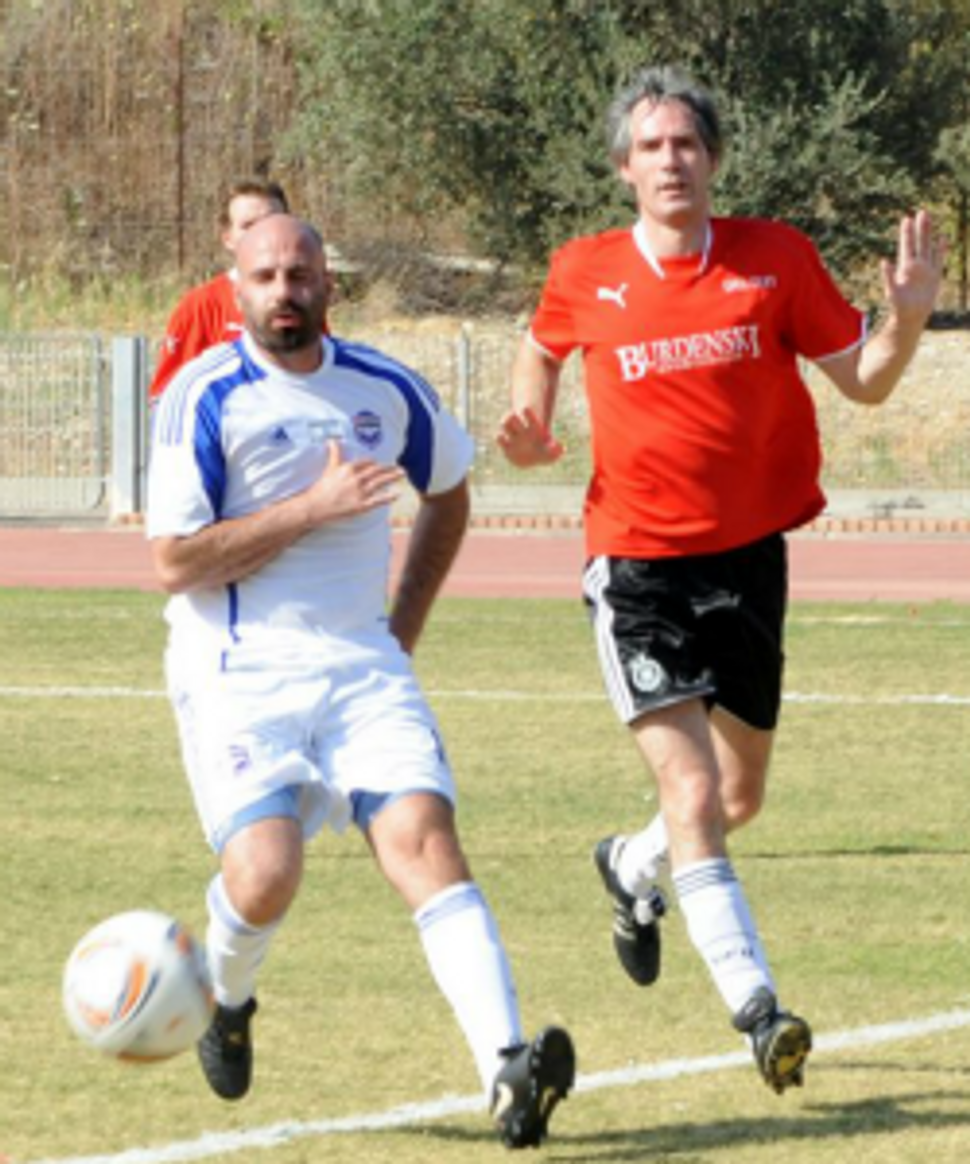 In the shadow of the Euro 2012 soccer championship, a smaller yet more intellectually profound sports event, took place last week in Haifa.

Israel hosted the so-called Authors’ Euro, an international tournament of national soccer teams consisting of writers and poets. For three days, German, Italian and Israeli authors battled for the cup. In between, they shared stories, participated in readings and panel discussions (and, of course, guzzled beer) while watching television as their “real” national teams fought for their own trophies.

The European Writers’ League has been in existence for about a decade. Teams of scribes from different countries started meeting and playing each other in the hope of fostering cultural exchange, increasing literary awareness and, of course, fulfilling lost childhood dreams of becoming soccer stars.

The Israeli team was founded by yours truly in 2008, following an invitation by the German team to play in Berlin. The response to my call was impressive. Among those traveling to Berlin in May of that year were striker Nir Baram (whose novel “Fine People” in English translation is due from Knopf next year); winger Avi Shilon (whose biography of Menachem Begin will be published this fall by Yale University Press); successful pop musician and novelist Yali Sobolin in midfield; and the author of “Almost Dead” (HarperCollins, 2010) — that’s me — in defense.

We were badly beaten there, but the event (hosted by the German Foreign Minister) was so successful, that as soon as we returned to Israel, we started plotting the replay. That December we invited the German and the English writers’ teams to a tournament in sunny Tel Aviv, in which we beat both teams and won the cup. A year later we travelled to London and were badly beaten again, in the pouring rain.

Although we have yet to draw thousands to the stadium stands in our games, our project does attract huge media interest every time we play. I will spare you the answers to the recurring questions we always get: Did Oz, Grossman, and Yehoshua fail the trials? How is the writing style reflected in the playing style? Would you rather win the Nobel Prize as a writer or the World Cup as a footballer?

Back to this week’s Haifa tournament: the municipality of the northern city agreed to host the tournament during Israel’s annual national Book Week, when publishers sell directly to the public, setting up stalls in streets and city squares all over the country.

Our first game was against our old rivals the Germans and finished in a disappointing 1-1. The Italians then beat Germany 2-1 and set the scene for an Israel-Italy final which we had to win. I have feared the Italians for some time. We didn’t know much about their football but on the literary side we knew they were strong, with international bestsellers like Fabio Geda (“In the Sea There are Crocodiles”) and Enrico Remmert (“The Ballad of Low Lifes”).

My fears were justified. The Italian writers, just like their real national team, were tough and determined, and turned our 1-0 lead to a 3-2 victory that earned them the cup. Well, at least finishing the tournament ahead of Germany is something to remember fondly, especially when their national team looks well on their way to the latest stages in the Euro 2012.

Scribe vs. Scribe on Soccer Field