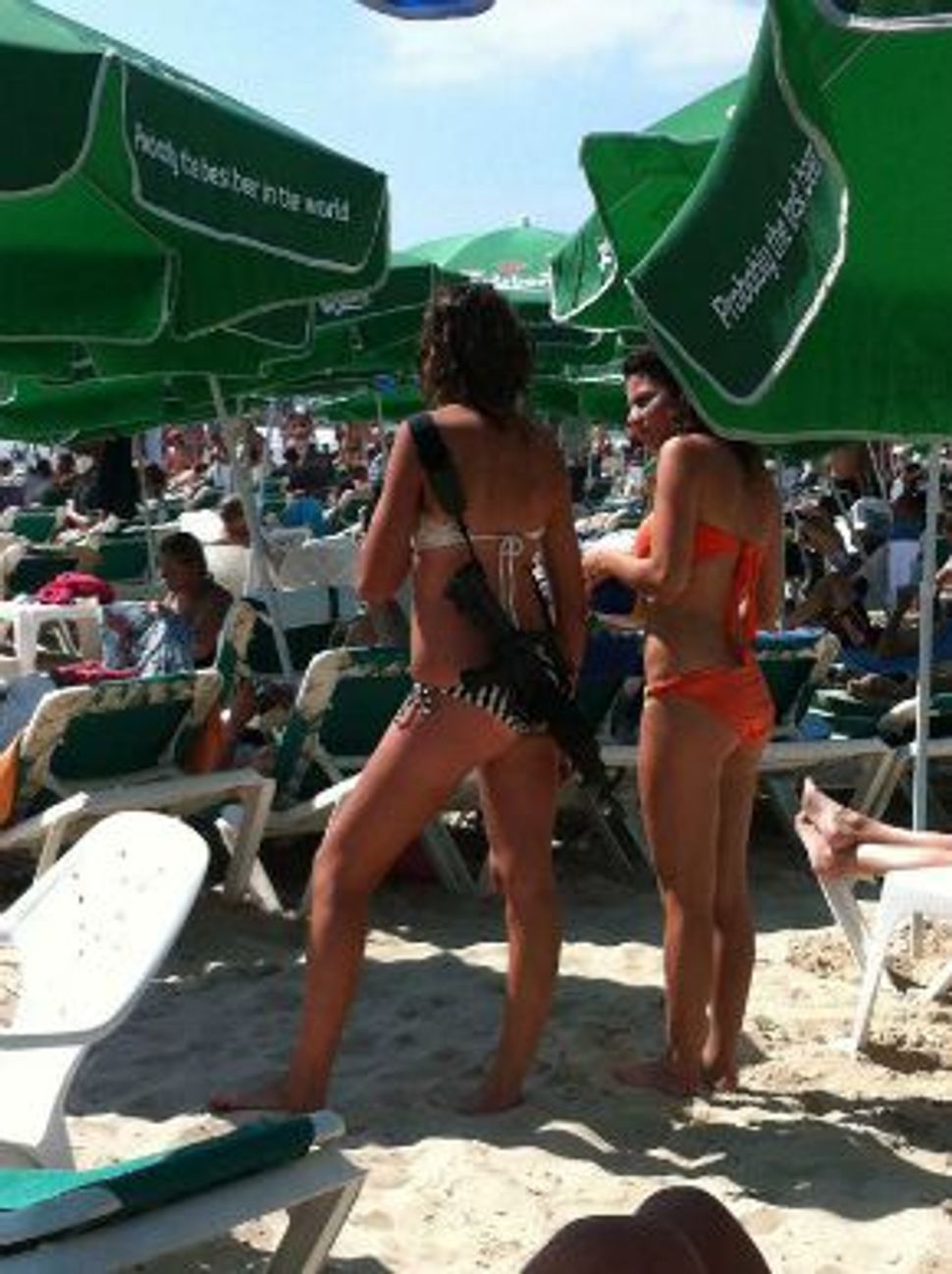 It’s not the first time a female Israeli soldier has been photographed in a bikini, but it might be the first time that soldier had a gun strapped to her back. And for some reason, that weapon makes all the difference. Maxim’s spread of bikini-clad IDF soldiers got 69 Facebook likes in the five years since it’s been up; a grainy, faceless picture of a non-posed woman on a beach in Israel has gotten more than 3,000 likes from viewers on a variety of different sites.

“Nothing more sexy than a half-naked woman with a machine gun,” commented one viewer of the picture on imgur. (He promptly received several replies from viewers who could, in fact, think of a number of sexier options, mostly involving the woman removing said bikini.) “Ugh, M4 always give the strangest tan lines,” quipped another.

This IDF soldier, whose picture was snapped by a stranger on a Tel Aviv beach, remains nameless, though her photo has been viewed by more than 700,000 people on imgur alone. That’s the photo-sharing site that posted the picture first, under the headline “Only in Israel.” The image has become a meme, posted on sites from Gizmodo (“Badass Chicks in Israel Don’t Go To the Beach Without Their Assault Rifles”) to the U.K.’s Daily Mail (“Do NOT steal this woman’s towel!”).

The sight of a woman carrying her gun to the beach shouldn’t be that unique in a country with mandatory military service for all 18- to 20-year olds, men and women alike. Soldiers are required to keep sight of their weapons at all times, leading to a culture where young men and women are often seen strolling through the mall, riding a bus, or eating shawarma with a gun casually slung over the shoulder. Disobeying would mean risking military prison.

While Israelis, or even frequent Israeli tourists, might find the picture unsurprising (none of the beachgoers in the picture are even glancing at this woman), it makes sense for the world outside Israel to be shocked by the image. But the image isn’t just shocking. It’s sexy.

The Daily Mail shut down comments on their article covering the photo, and the gadget geeks at Gizmodo got wrapped up in a political debate over the Middle East conflict, but imgur viewers went nuts over the picture’s sex appeal.

“She could krav my maga,” said AngryFace (Sexual Joke Rule Number One: It don’t need to make sense, as long as it sounds dirty), while Toothbrush posted, “As a straight female, I’m slightly turned on — and I’m not sure why.” The comments that followed used and overused every possible sexually suggestive remark about guns, weapons and potential hiding places for her magazine.

So what is it that makes this young woman the focus of so much sexual attention? “I love a woman who could kick my a–,” said commenter garuga. There’s something about the implications of power with a gun, and the already-sexualized bikini mixes those two themes into one energetic frenzy of lust.

The most interesting part for me, though, is comparing this photo with the Maxim spread from 2007. Those models, though “real” people, and former IDF soldiers, were made up, airbrushed, seductively posed and clad in stilettos. This woman is “real” in a different sense. She didn’t know this picture was being taken; she’s not posing, polished, or even pouting.

Perhaps the Maxim gilded the lily. Who wants to get with a woman who’ll have to wipe off her lipstick with chlorine before she can even kiss? It’s the real girl — with the not-so-perfectly-plump-tush — whom we might find most attractive.

That, to me, is the truly shocking message of this meme.