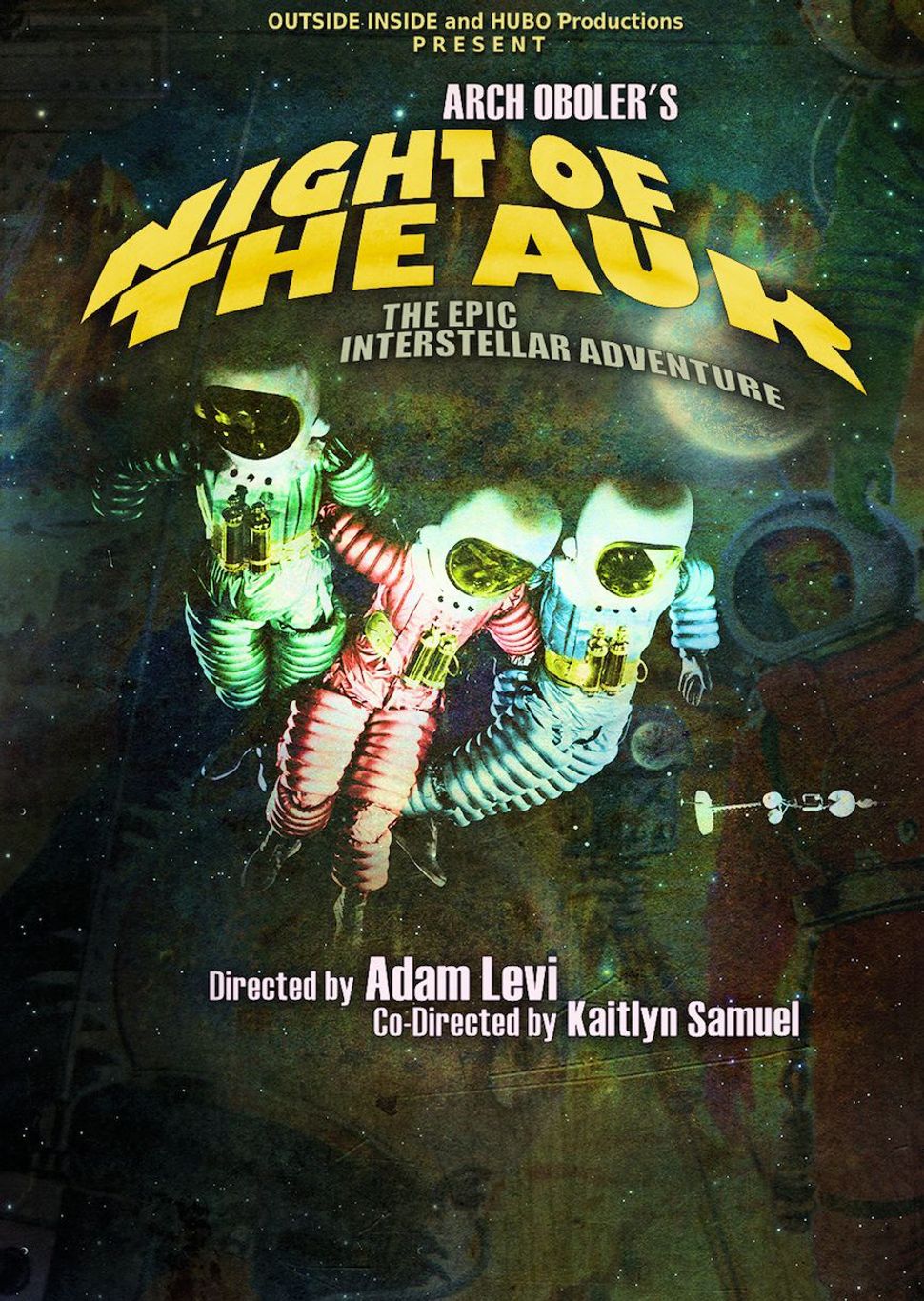 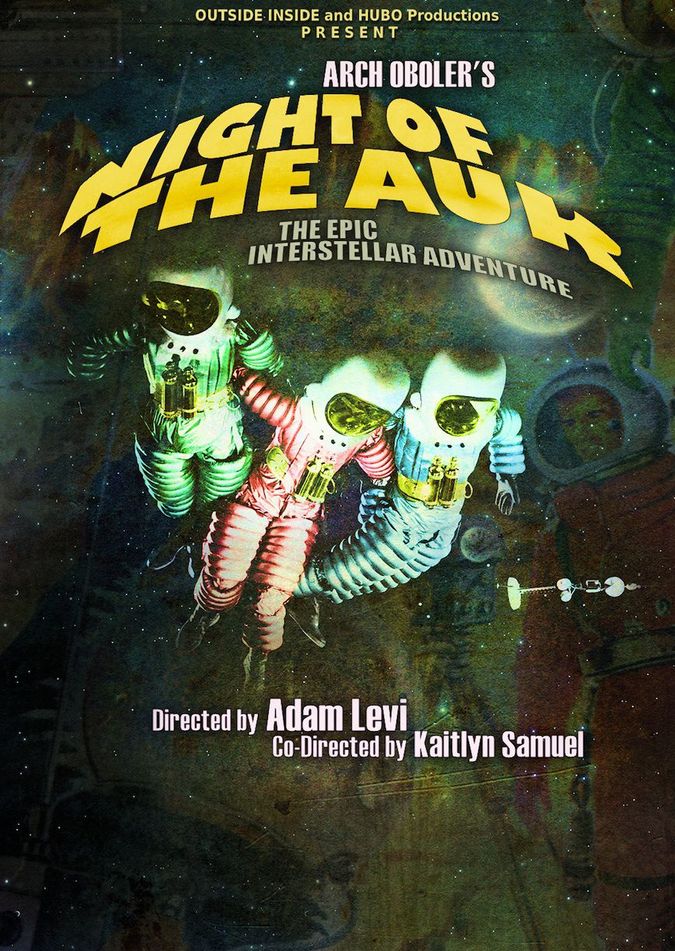 Oddly, “Night of the Auk” was not the only science-fiction play on Broadway that year; the late Gore Vidal’s sci-fi comedy “Visit to a Small Planet” ran concurrently. But unlike the smash-hit “Planet,” “Auk” did not fly. After Dick York turned down Vidal’s play for Oboler’s an irate Vidal told York “you got on the wrong spaceship, you prick.”

Now, “Night of the Auk” is being revived at the New York Fringe Festival with five performances starting August 10. This new, abbreviated production —shortened from three hours to 75 minutes — marks the first major production of the play in nearly 50 years.

The plot of “Auk” is pretty grim. The first man to walk on the moon is left behind, the expedition’s leader is unhinged, and the ship’s scientist is convinced that mankind is heading for extinction. And that’s just the beginning.

The new production of “Auk” is adapted by Michael Ross Albert, who also stars as Lewis Rohnen, the expedition’s leader, and is directed by Adam Levi. The Arty Semite spoke with Albert and Levi about why they decided to revive such an unlikely play.

Michael Albert: The character of Lt. Jan Kephart is probably a German Jew. At least, that’s the story we created for ourselves; he talks about how his father invented the technology behind the spaceship, but lies in an unknown grave. There’s also a reference that his father was liberated, and this was probably a holocaust reference.

How did you come across “Night of the Auk”?

Adam Levi: I was doing a database entry job for Broadway shows. I was working through the 1950s when I got to “N,” and I came across the play. The summary almost made me fall out of my chair laughing: A rocket-ship returning from the moon through interstellar space sends a message to Earth that sparks a global atomic war, which destroys the planet.

Given that “Auk” was a failure in all of its stage incarnations, what made you decide to revive the play?

Albert: Mostly the role of Lewis Rohnen. I said if I never act again, I want to play this part. Reading the script was also a fascinating experience. I couldn’t put it down. It’s this epic space drama. The fact that something like it had taken place and its obscurity were very, very appealing.

Levi: Much of the play’s language is very pretty, the language is what attracted the original actors. Christopher Plummer thought it was one of the most beautiful plays he ever read. But it doesn’t serve the dramatic tension. In Plummer’s biography, he mentions that Bloomgarten unsuccessfully tried to convince Oboler to shorten the play. Now, the Oboler estate has allowed us to edit and adapt it.

What were the challenges in adapting the play and making it relevant?

Albert: It was tough to adapt. Adam and I began looking at the play as a piece of historical kitsch. But, I’ve always tried to steer away from that. For example, there are moments in the original play when the characters are making cocktails in space. That’s so anachronistic in terms of what we ourselves know now about technological advancements. We wanted to walk the line between celebrating his imagination as opposed to making fun of it.

Levi: The play is actually pretty relevant other than there being radiation on the moon and people smoking and drinking in outer space. The play is a morality tale about Capitalism and greed versus the pursuit of truth and science. In that way, the play is probably more relevant today than it was then.

Why did Oboler write the play in blank verse?

Albert: From reading the published play’s introduction and hearing about peoples’ experiences, Oboler thought of the play as being on par with Greek tragedy. So he mimicked it. The characters inhabit a much larger classical reality than they would with the normal modern dialogue that was prevalent in the 1950s. The 1950s was the golden age of American Drama. But, Oboler took things back to an epic scale. I don’t know if the blank verse does a disservice to the play or if it would have been more successful with naturalized dialogue. The heightened language definitely creates a different reality.

Some of the original actors wrote that they had great difficulty with the language of the play. Did you encounter similar problems?

Albert: I have seen some of the actors struggling with the text, to inhabit that world. Recently, in rehearsals, one of the actors playing Bruner has a six line speech, and she said about it “is that just a fancy way of saying: I have a bad feeling about this?” But, Oboler’s writing has a lengthy way of speaking.

You are in touch with Oboler’s family. Did they have any stories related to the play?

Albert: Well, his son Steven used to go for walks in the mountains with his father. And, they could see the testing sites from the view in the mountains. And Oboler would go there almost every day and watch the fallout. He would tell Steven that this is how the world will end.

What challenges did you face in directing the play?

Levi: The biggest challenge was in making the play active. There’s a lot of discussion and description as in a radio play. I think what we have now is an enjoyable show, Arch Oboler would be surprised at how entertaining it is. The surprise ending is eerie. As the characters start to die and as soon as you realize everyone on Earth is dead, it knocks the wind out of you.