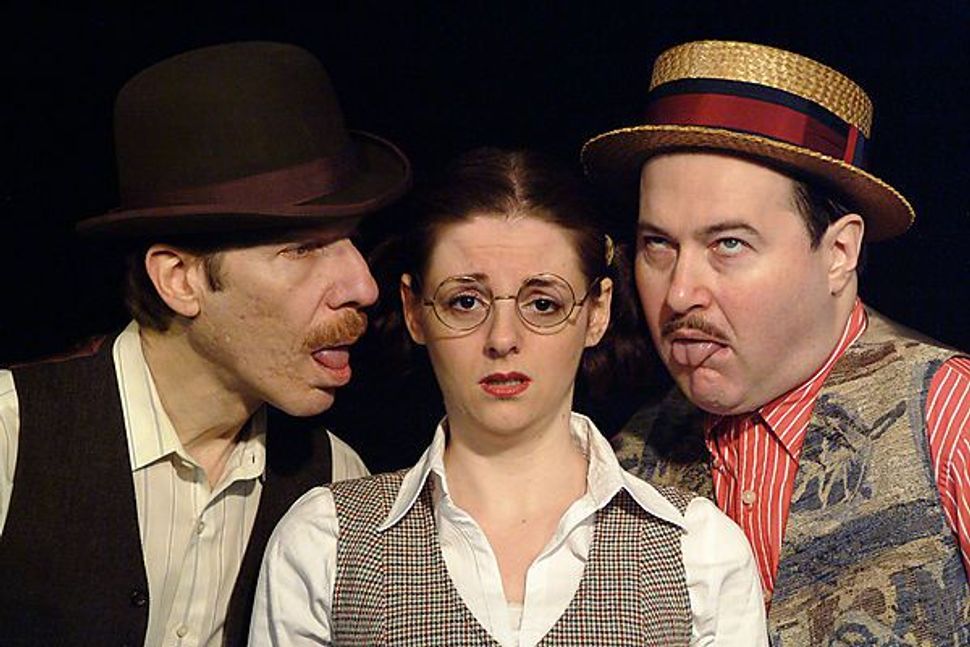 Allan Lewis Rickman likes to say that the best audiences for “The Essence: A Yiddish Theatre Dim Sum” are gentile college students — a demographic that seemed (shockingly!) underrepresented at the show’s opening NYC Fringe Festival performance at the Robert Moss Theater on August 14. More than a few people in this crowd murmured recognition of familiar tunes and might have kept right on laughing at jokes in Yiddish even if Matt Temkin’s excellent English supertitles had malfunctioned. 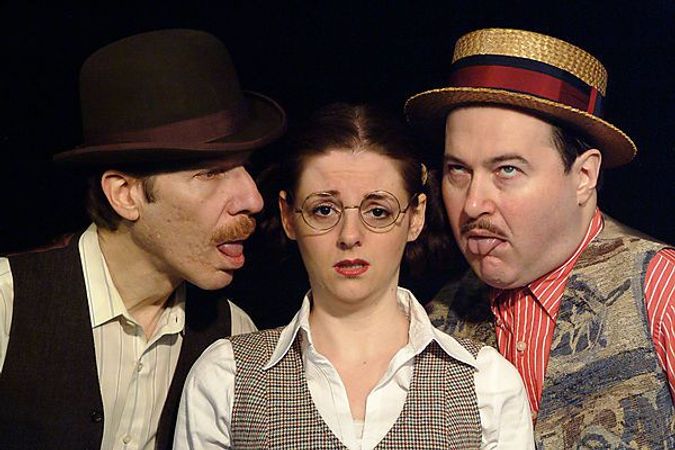 When a language is said to be dying, it’s always gratifying to see so many of its champions in one place — and yet, though I’m not a college student, I wonder whether, as a theater fan who doesn’t know a lick of Yiddish, I’m closer to the target audience Rickman and co-creators Yelena Shmulenson-Rickman and Steve Sterner envisioned for the piece. What they’ve created is a brisk introduction to Yiddish theater in the vein of “Schoolhouse Rock”: You’re meant to be so swept up in the fun that you don’t realize you’re learning all about a subject that, like grammar or math, some folks (incorrectly) imagine to be dull.

The show hums along at a cheerful clip, with Shmulenson-Rickman and Sterner taking turns at the piano as all three performers cycle through various roles in memorable snippets from Yiddish plays and musicals. Between scenes, they address the audience as chirpy, wide-eyed versions of themselves, telling the story of Yiddish theater worldwide and posing surprisingly direct questions like, “Is theater better if it’s in Yiddish?” These narrative interludes are wisely kept brief and accessible even to those with no Jewish background or prior knowledge of Yiddish culture: At one point, for example, Shmulenson-Rickman pauses to give a succinct definition of the word “shtetl.”

Humor, of course, is the main weapon in the trio’s arsenal, and Rickman and Sterner are especially well suited to portraying classic comedic characters from the Yiddish stage, from fast-talking swindlers to lecherous old men. But they also have a penchant for parody, and some of the show’s funniest moments come when the performers poke fun at the maudlin tragedies in the Yiddish repertoire. The night I saw the show, Rickman nearly brought the house down with his high-pitched wailing as the forlorn orphan in Herman Yablokoff’s “Papirosn” (“Cigarettes”), acting the part of the woeful beggar while Sterner played the straight man, gamely singing the song in full voice. “The Essence” is convincing partly because it doesn’t argue that all Yiddish plays and songs are masterworks: Some are profound, others escapist, and still others spectacularly manipulative and overwrought.

That’s not to say that it’s without genuinely poignant moments, like when the performers tell the touching story of how the playwright Abraham Goldfadn, who’d had a dry spell after moving to New York late in life, lived just long enough to see his “Ben Ami” become a smash hit. Shmulenson-Rickman’s raw rendition of Aaron Zeitlin’s “Dona Dona,” performed with real tears glistening in her eyes, is the emotional centerpiece of the show’s brief but sensitive treatment of the Holocaust.

Though the Yiddish theater survived the European ghettoes and death camps, it had other enemies and “The Essence” isn’t shy about pointing fingers. The performers speak directly to the audience as they describe how the language suffered after the formation of the State of Israel, noting the fact that, just years after the Holocaust, the new Jewish State became the only place in the world where performing Yiddish theater was illegal. The irony stings, and the authors deserve credit for raising an important point that will ruffle feathers in some audiences.

Elsewhere, though, blame seems misplaced. At one point in the show, a hint of bitterness creeps into Rickman’s voice as he lectures about a Christian organization that, to this day, prints Yiddish translations of the New Testament with the hopes of converting Jews. Missing an opportunity to ridicule these misguided evangelists — are 21st-century Yiddish speakers really the likeliest candidates for conversion? — Rickman instead sets up an entrance for Sterner as Jesus in a blond wig. As Shmulenson-Rickman plays the accompaniment from the recognizable Bach/Gounod setting of “Ave Maria,” Sterner recites well known passages from the King James translated into Yiddish. All of this leads to a limp punch line involving the phrase “oy vey.” Though the Fringe audience dutifully roared, a guy saying the Beatitudes in Yiddish just isn’t that funny — or at least isn’t as funny as some of the banter in Yiddish sketches like Shimon Dzigan’s “Einstein Weinstein,” which is excerpted later in the piece.

It’s a shame, because the blond Jesus gag is a rare misstep in a show that otherwise adheres to its opening declaration that in Yiddish one must “juggle the words and do tricks.” Even the informative English-language interludes include clever wordplay that mimics Yiddish comedic style. In the Lower East Side in the 1880s, Sterner deadpans early in the show, “you couldn’t swing a cat without hitting six Jews.” Later, in a song lampooning nostalgic Yiddish musical revues, he flashes a bland smile and sighs, “Remember our childhood in the slums? We used to sit behind the mikveh and play with the rats!”

Clocking in at a scant 90 minutes, “The Essence” has a lot in common with other laugh-inducing condensed histories, like “The Complete Works of William Shakespeare (Abridged),” a work that has become a comedy staple for university and high-school theater troupes. (“Potted Potter: The Unauthorized Harry Potter Experience,” which just opened on Broadway, works on a similar premise.) And as wonderful as it is to see such seasoned performers bringing their creation to life onstage, the best thing that could happen to this play would be if those college students Rickman mentions, gentile or otherwise, took it up as their own. It’s as much a work of art as it is an exercise in persuasion — a kind of living brochure that begs to be passed around. Of course, to perform it, these young amateurs would need to learn some Yiddish — and that would be okay, too.