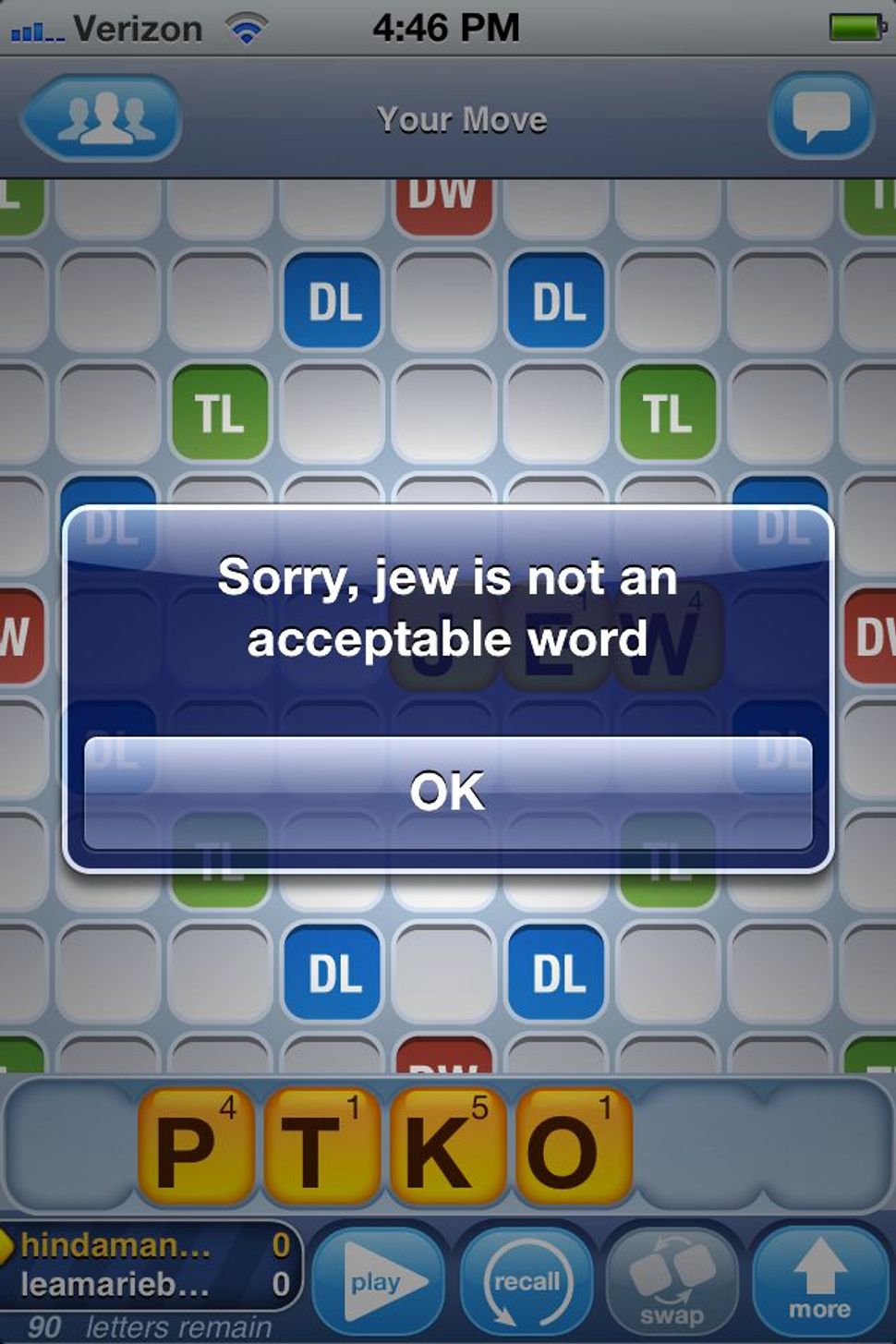 To: Mark Pincus, founder and CEO of Zynga
From: Hinda Mandell, Words with Friends user

I have a gripe: Don’t worry — it has nothing to do with Farmville.

I’m writing because, when I play the smartphone app Words with Friends, I feel bad about myself — and not just because, when my pal plays “INCEPTS,” I hit back with “THE.” (Never mind that I’ve also had to visit dictionary.com to look up the definition of words like “INCEPTS,” despite having a Ph.D.)

No, I feel bad about myself because, when I attempt to play J-E-W in Words with Friends, a box pops up on my iPhone screen to inform me, “Sorry, jew is not an acceptable word.” I have to hit the “OK” button — indicating consent — in order to continue playing.

Not cool, Pincus. Not cool.

When I first started playing Words With Friends, I saw J-E-W as just an easy 13-point word. But now, thanks to that message, I am reminded of its cultural baggage and the idea that J-E-W needs an “ISH” tacked onto its tuchas to be considered courteous speech.

But what is this — a 1950s country club in Minnesota where words like J-E-W can only be whispered?

I must say, though, that my mother agrees with you.

Well, whatever. (For the record, my mom doesn’t know what she’s talking about because she’s one big proud J-E-W.)

I did a bit of online sleuthing (I have a doctorate, you know) and this piece here says that you’re a J-E-W. I hate to play the tribal card — but that doesn’t mean I won’t. Perhaps you could suggest that the Words with Friends programmers make J-E-W into an acceptable word. I can think of about 18 million folks (minus a few self-haters) around the world who might support this move.

And I’m not the only one taking to the Internet to complain about the lack of clear guidelines for Words with Friends. I understand that in Scrabble, one cannot play capitalized words. Yet in Words With Friends, I’ve successfully played both N-I-L-E and Y-I-D.

According to Zynga’s online help desk, Words with Friends uses the Enhanced North American Benchmark Lexicon. When I clicked on the Lexicon’s link I saw that J-E-W is an acceptable word there.

(O-Y, by the way, is an acceptable word, according to Words with Friends. We are in agreement on that one.)

In closing, Mr. Pincus, I think I speak for the Words with Friends community when I say that J-E-W is a word we all want to play! Please don’t make me enlist the support of Alec Baldwin to help my case.

I eagerly await your response.