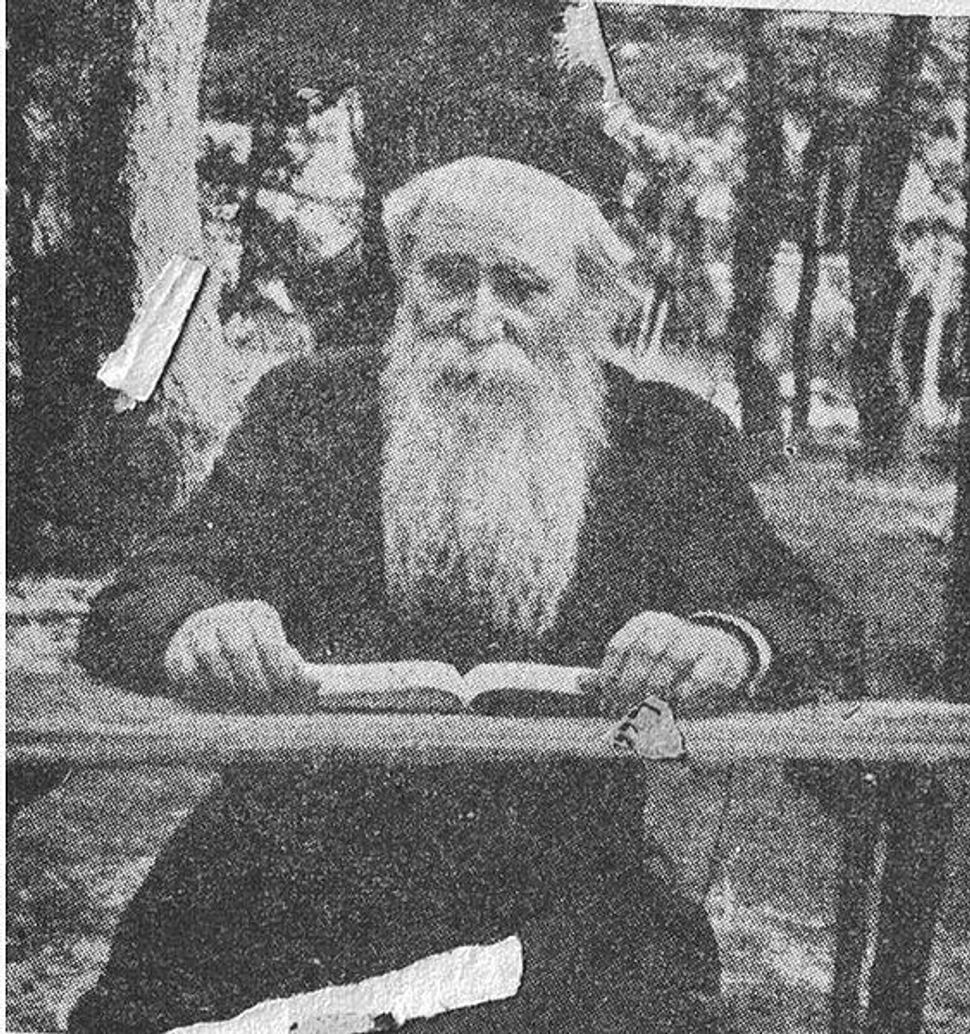 Hillel Zeitlin (1871-1942), the leading neo-Hasidic thinker in Eastern Europe before the Holocaust, was for Hebrew and Yiddish-reading Jews what Martin Buber was for their more westernized German-reading brethren: the person who rendered the passionate religious life of Hasidism accessible to non-Orthodox Jews. A prolific writer and well-known lecturer, teacher and journalist, Zeitlin was one of the best-known martyrs of the Warsaw Ghetto. This Sunday, September 15, the eve of Rosh Hashanah, marks the 70th anniversary of his death.

Zeitlin, who was born in 1871, was already frail and elderly by the time the Ghetto was established because he and his family shared the widespread starvation and illnesses of Warsaw’s Jews. One of his sons died of typhus in the ghetto, and his remains are in one of the last graves in Warsaw’s huge Jewish cemetery. (Another son, the well-known poet Aaron Zeitlin, was on a lecture tour in the U.S. when the war broke out in 1939, and thus was saved.)

When Zeitlin’s block was called forth to the notorious Umschlagplatz (assembly-point for the forced march to Treblinka), Zeitlin came out wearing tallit and tefillin, a statement of defiance to the Nazis, who showed particular cruelty toward Jews dressed for prayer. He also carried a copy of the Zohar, the text sacred to Jewish mystics, in his hand. He joined the march in this way, but, according to the one survivor of the march, died along the road.

Zeitlin loved the Zohar and studied it all his life; one of his major projects was translating it from the Aramaic original into Hebrew. When he carried it with him at this moment, he surely had in mind a key line about the Zohar widely quoted in the Hasidic sources he knew so well: “With this book will Israel go forth from exile.” Going forth from his own bitter exile, Zeitlin wanted to be properly prepared.

Born into a pious Belorussian Hasidic family, Zeitlin was one of many thousands who, around the turn of the 20th century, rejected the shtetl, or small-town life of Eastern European Jews. Breaking with religious observance was part of removing the blinders that kept Jews cut off from the new world of ideas. Completely self-taught, Zeitlin immersed himself in European philosophy and literature. His first books, on Spinoza and Nietzsche (written in Hebrew), were attempts to share his passion for newly found truths with his contemporaries.

But then something happened to Zeitlin. Unlike almost anyone else in his era, he returned to the Jewish tradition. In seeking an authentic Jewish philosophical language, he turned back to the Hasidic classics on which he had been raised. A unique figure on the Polish-Jewish landscape, Zeitlin again dressed as a hasid and called for a return to God’s ways. Still, he earned his livelihood as a journalist, writing about religious affairs and Hasidism for the secular Yiddish press. But every time he wrote about a Hasidic master, he would compare him to the 19th-century Hindu mystic Ramakrishna, a character in a Tolstoy novel, or a Christian saint. No one knew what to make of this unique and dramatic figure.

Zeitlin dreamed of creating a new Hasidism, a Jewish religious revival appropriate to his times. He published books and pamphlets calling on Jewish youth to found a group to be called Yavneh that would carry the torch of this moral and spiritual revival. They would reread the mystical tradition in an open, universalistic way, seeking in all great art and culture what the ancients had sought in Torah alone and calling for love and compassion throughout the human community. A poignant 14-point manifesto for members of Yavneh, first published in 1924, begins with what sounds like a socialist agenda tinged with some religious allusions:

Support yourself only from your own work, from physical labor and not from trade. Trade is based primarily on the deception of customers, and this means lies, while the blessed Holy One is Absolute Truth… Keep away from luxuries! Luxuries throttle the mind and the strength of a person… Do not exploit anyone! If you support yourself solely by the work of your hands, the length of your days will be surrounded by modesty, calm, and humility…

Zeitlin’s call for Jewish workers’ cooperatives that would also make time for prayer, sacred study, and helping the poor did not achieve organizational success. His became one more voice in the conflict-ridden public square of interwar Polish Jewry, where Zionists and socialists, Orthodox Jews and secularists, Yiddishists and assimilationists all struggled for dominance of an increasingly desperate population. Eventually all his dreams, along with Zeitlin and his family, were buried in the ashes of the Warsaw Ghetto.

Fast forward 70 years. Hasidism survived the Holocaust and is increasingly playing a great role in Jewish life in both Israel and North America. Neo-Hasidism has also come into its own, as many Jews outside the Hasidic community read and are inspired by the teachings of the Hasidic masters. Once looked down upon by westernized Jews, the mystical tradition is now being actively retrieved for the Jewish mainstream. Many young Jews, inspired partly by the environmental movement, partly by the quest for economic justice, are either turning “back to the land” or are working in far-flung Jewish-sponsored volunteer projects. Like Zeitlin, they are looking to create a Jewish spiritual revival, one that turns its back on the comfort-seeking ways of the prior generation.

Now, on his 70th Yahrzeit (anniversary of his death), a collection of Zeitlin’s writings is finally appearing in English translation. To no one’s surprise, it is published by the Paulist Press, owned by a Roman Catholic order, in a series called “The Classics of Western Spirituality.” No better evidence exists of the long road traveled in Jewish-Christian relations since the Holocaust. Zeitlin is part of a bookshelf that includes many Christian saints, Sufi masters, native American shamans, and a host of others. Imagine that Zeitlin could look up just for a moment from that road to Treblinka and see himself there! But maybe, just maybe, that unique messianic dreamer with the Zohar in his hand would not be entirely surprised.