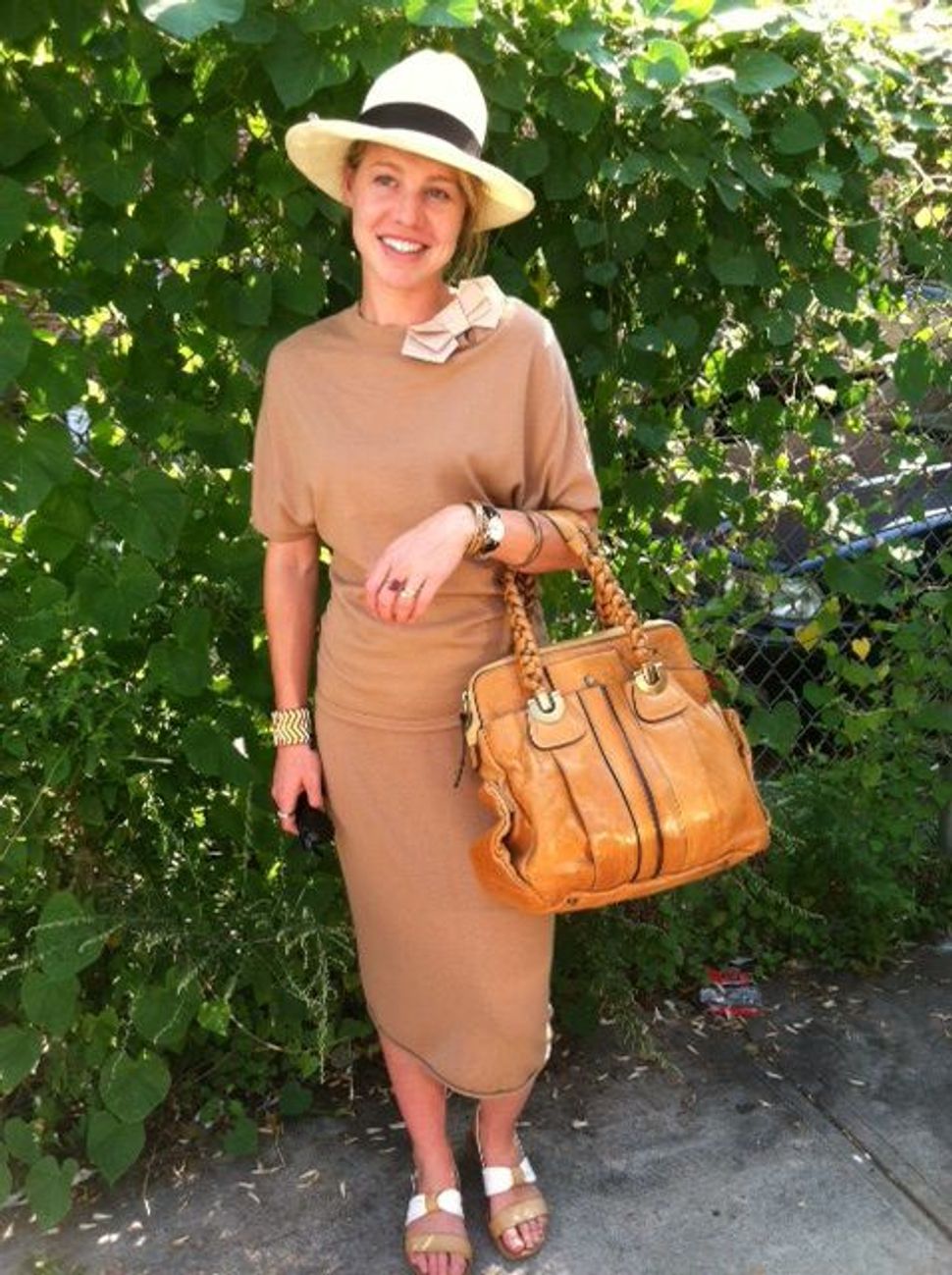 Simi Polonsky, an Orthodox woman living in Crown Heights, is an expert at turning runway looks into synagogue-appropriate styles. She grew up in Australia, where she was a personal stylist for several Jewish women, helping them find stunning clothes that meet modesty requirements. Now, with her sister Chaya Chanin, Polonsky is running Frock Swap, a roving New York City consignment store that sells designer clothes to Orthodox women who want to look great while abiding by Jewish tznius customs.

Polonsky spoke with the Forward’s Alyson Krueger about New York Fashion Week and what fashion cues modesty-conscious women can take from the event.

Alyson Krueger: How have you been following Fashion Week? What’s your reaction?

Simi Polonsky: I love the volume in everything. Some designers have more color than others, and I definitely like that as well. I also love the mix. I feel like I see a resurgence of old world glamour.

When you’re watching Fashion Week as an Orthodox Jew who dresses modestly, what do you look for?

My eye automatically pops more when I see a whole look that could be modest! You wouldn’t even have to do anything! Having said that, even looks that aren’t modest, I still appreciate that because for me, clothing is really art. For me, it’s like going to an art gallery.

Is high fashion coming up with more modest styles today?

You look at the runways and there are endless, endless, endless natural looks that are modest and that can be modest. And not only that, you see “it” girls and ex-models and photographers, so many of their looks are modest. And Marc Jacobs actually just said about his show, “Young girls need to learn that sexiness isn’t about being naked.”… The designers themselves and the fashion icon people, they know, they don’t need to expose themselves. They are very comfortable with being totally covered and fashionable, because you can be totally covered and fashionable. It’s not an oxymoron!

But what about the bra-tops from the DKNY show or the gorgeous red, backless dress in the Michael Kors show? What should Orthodox women do with non-modest looks?

When I see a dress that has no sleeves I automatically think of how I can wear that with a cute little shirt underneath or with a blouse. And not to make it look gaudy, and not to take away from the look, but only to enhance the look. It has to fit in with the style of the dress. For example, there was this chiffon dress with leather harnesses all over it, and I would put this cool leather jacket [over it].

Is that destroying the fashion?

I think it’s hard, I think it’s a talent to take something that isn’t modest and make it look modest… that’s what we do. When people come in we have dresses that don’t have sleeves in them, and that’s what we are really good at: helping people take the look from the runways and create an unbelievably fashionable [and modest] look.

If I love an outfit from Fashion Week, what should I do to make it my own?

To find the exact looks from the runway, today, tomorrow, next week, you probably won’t find them at a reasonable price because they just came out… But you can mirror those looks… There are tons of places — Top Shop, H&M, Zara; their whole thing is they make designer pieces for less…. Consignment stores are totally the way to go… You can find a great dress that’s not designer and a great pair of boots that are designer and look amazing… You don’t have to take the same top and shirt and boots and wear the same hairstyle that Oscar de la Renta had on each of his models. You can see, ok, there was volume in the skirt. It was a pop of color here, a pop of color there. If you use your imagination, you can do it.

But even if you watch Fashion Week with the intention of making the styles modest, are there some religious leaders who would say that it’s not even appropriate to watch it at all?

There is definitely a concept that you should surround yourself with modest situations and circumstances, and there are people who wouldn’t go to a certain environment because it isn’t modest… Most people in ultra-Orthodox communities don’t even know it’s Fashion Week because it’s not what they are into! They are into Rosh Hashanah. And me, on the other hand, I’m thinking about Fashion Week and Rosh Hashanah. And what I’m wearing on Rosh Hashanah…You can go [to Fashion Week] and keep it in the realm of religion. It’s not anti-religion.

So what are you wearing on Rosh Hashanah?

What I want to do is, I found this vintage dress from my mother-in-law. It was like Louis Vuitton’s (show in the) fall… huge felt hats and oversized big jackets, the maroons and burgundies and mustards — that whole type of look. I have that dress and I’m going to wear it on Rosh Hashanah, cause I love that look. And it wasn’t a Louis Vuitton price!

For Simi’s picks for the best ready-to-wear modest looks from New York Fashion Week, click the links below: