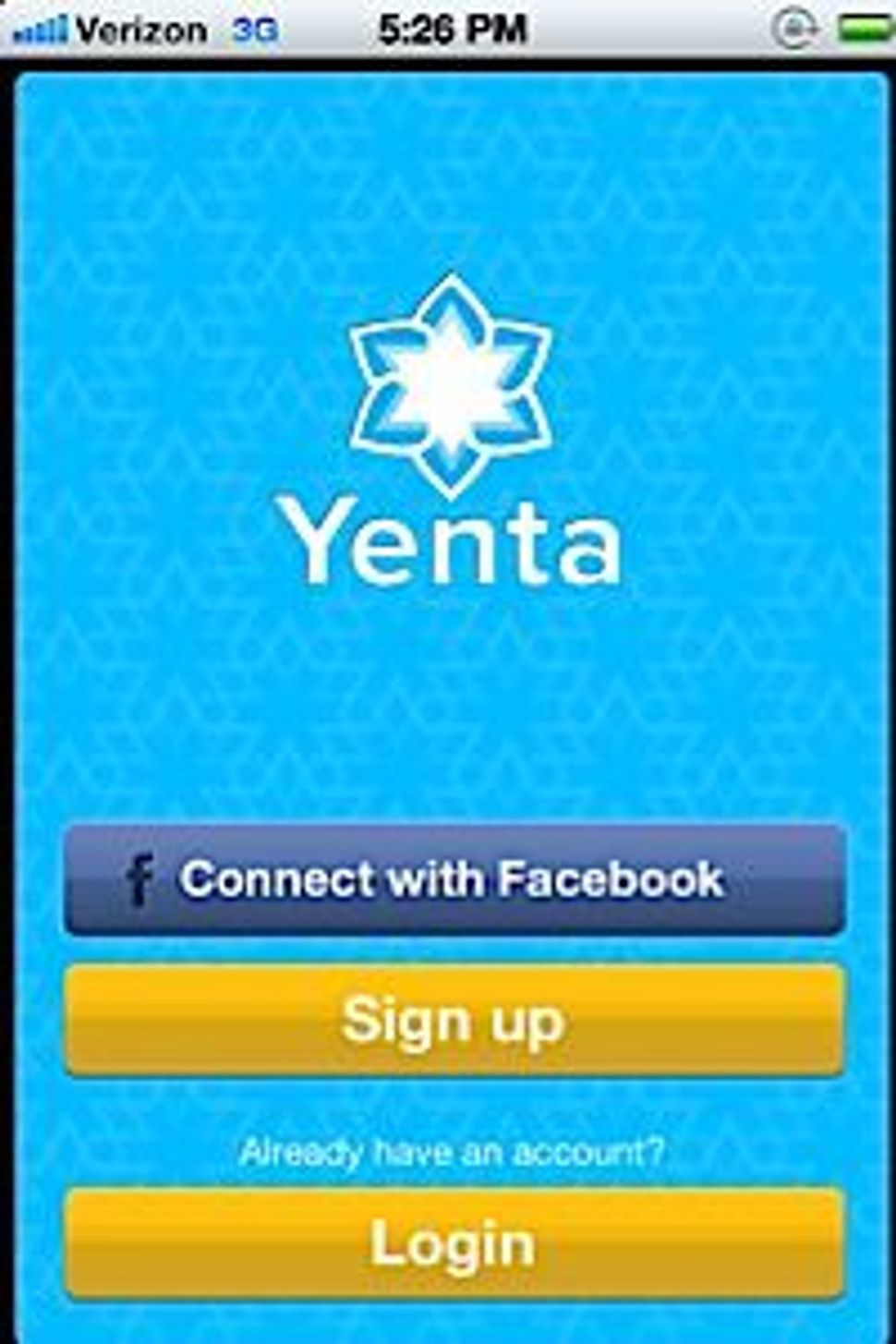 In case you didn’t have enough grandparents, neighbors, and rabbis trying to make sure you don’t remain single and Jewish for long, your iPhone is getting in on the matchmaking game. Today, the New York Post reported that Yenta is a new app to solve your romantic and semitic woes.

In a similar model to the popular gay app Grindr, Yenta tracks your location on your phone and shows you a list of other single members of the tribe in the relative vicinity. However, while Grindr is used almost explicitly for finding a quick sexual encounter, Yenta desires to help you find your “Jewboo,” which is possibly the least sexually appealing term possible. In fact, creator Luba Tolkachyov made clear Yenta’s more innocent intentions. Viewing it as a twist on the ever-popular JDate, the app is meant to remove “the need for a lengthy profile,” he told the New York Post. Well, I certainly know I am looking for a Jewish soulmate who hates formulating sentences so much that a dating profile is unbearably strenuous for him to compose!

According to Tolkachyov, single Jews should be scoping out every environment with the potential for a shidduch, like the eagle stalking mountainous terrain for prey. He wants users to be able to “walk into a coffee shop and find out who’s Jewish and single around you,” he added. God forbid you buy your morning java and not be consumed with finding your future spouse; a moment spent not obsessing over finding your beshert, is a moment wasted.

The app is currently 10,000 strong worldwide, a drop in the bucket compared to Grindr’s 4 million plus. But, it’s still a sizable community for an app that’s only been available one month.

For the strict purpose of journalistic integrity, this intrepid reporter downloaded Yenta to test the app out. After being miffed it would not let me proceed without uploading a photo, I chose a group shot, so that no one could actually recognize me, which brings up an interesting issue. I nearly had a heart attack when I thought my finger slipped and hit the option to publicize on Facebook. While online dating has lost most (okay, some) of its stigma, apps for dating really aren’t there yet.

Yenta does try to ask those cute, Jewish matchmaking questions, like “How Jewish are you?,” “What’s your schtick,” and “What would impress your mother?” Yet, if it wants to be a dating, as opposed to hook-up, app, it’s going to need to provide more information about its users. Even if you want to, there really isn’t room to list your age, profession, or relationship status (don’t assume everyone on this is single). With so little personal information presented, it seems to set up users only for casual encounters — which probably won’t make you a hot commodity on the Jewish marriage market.

But who knows, with a little time, some more users, and less stigma, Yenta might just be the next step in 21st Century Jewish dating. There’s potential, if enough cynical, burned out, but still slightly hopeful single Jews begin signing up for Yenta.

But until then, I’m keeping the tracking feature off.