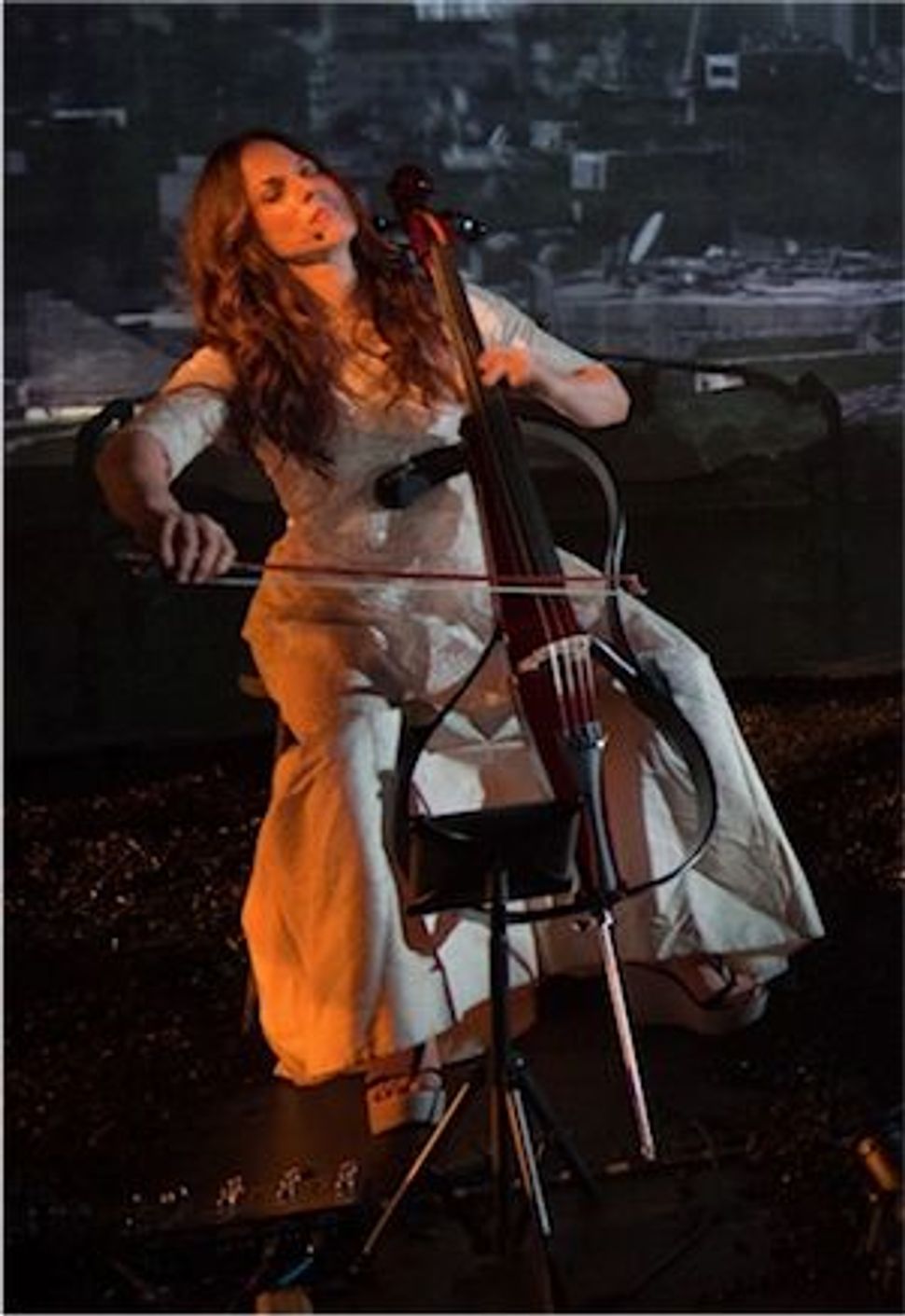 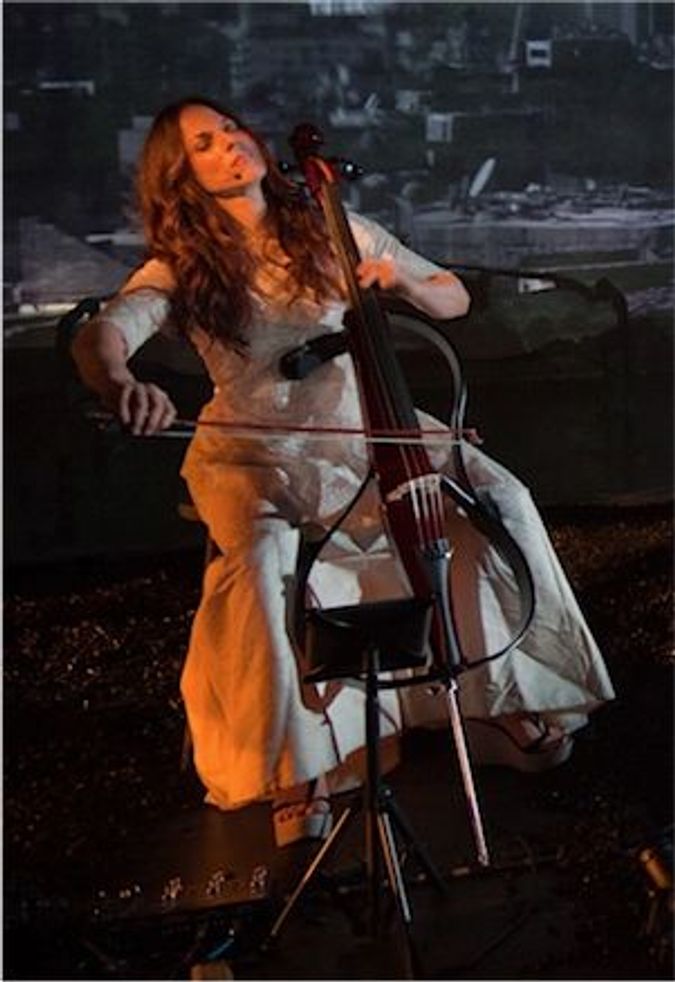 In “Elsewhere,” Lot’s wife finds fine physical form in the magnificent, statuesque body of actress Helga Davis; chats across time through what Beiser calls an “imaginary ‘Skype’” with another woman facing her own apocalypse, and describes the way her morning cereal caught in her throat on the day she was forced from the home where she’d raised two daughters.

This stunning portrait of a reimagined biblical anti-heroine comes in the third and final segment of a 70-minute multimedia work that Beiser describes in her artist statement as “bearing witness” to the “particular suffering endured by women throughout the millennia and across the world.” Created with Robert Woodruff, who directs the piece, the collaborative project also counts among its notable contributors several prominent women artists, including composers Eve Beglarian and Missy Mazzoli, choreographer Brook Notary and playwright Erin Cressida Wilson.

Yet the most powerful voice in the production is unquestionably that of Beiser’s cello, which is every bit as expressive as a human voice but also does what a singer cannot — gliding effortlessly across four octaves, playing lush counterpoint and ethereal chords and, with the help of electronic effects like reverb and distortion, producing a host of unsettling otherworldly sounds. The success of the “cello opera” concept depends on the ability of a seated cellist, half hidden behind a bulky instrument, to enthrall in the manner of an elegantly costumed, angel-voiced diva striding out to center stage, and Beiser rises to the challenge. Even with dancers flitting about her, one’s eyes are drawn to her own graceful movement as music seems to well up out of her body. (Flowing chestnut hair to frame striking angular features and piercing blue eyes doesn’t hurt, either.) The New Yorker got it right when the magazine labeled the Israeli-born classical-music rebel a “cello goddess.”

“Elsewhere” begins with Beiser, dressed in a white lace frock reminiscent of a wedding gown, sitting in front of a row of five cots laid end to end. An enormous sheet of translucent plastic hangs like a curtain in front of the scene, and in front of it the rest of the stage is covered in a deep layer of small, dark, rubber stones. Beiser intones lines from French surrealist Henri Michaux’s apocalyptic poem “I Am Writing to You from a Far Off Country” and plays the haunting drones and wailing laments of Beglarian’s music as Peter Nigrini’s video projections — white lines and frames, Beiser’s face, another woman’s face, drops of water — appear behind her and on the plastic curtain.

Sometimes Beiser draws out the exquisite loneliness in Michaux’s text, like when she asks her far away correspondent, “Does water flow in your country, too?” The word “rape” is never uttered, but the act is suggested as the cello plays a shrill, rhythmic passage, four leggy dancers in their underwear fling themselves repeatedly against the cots and Beiser says, “All of us women here live with tightened throats. Do you know, although I am very young, in other times I was younger still, and my companions were also.”

Between Michaux’s evocative text, the striking visual elements and Beglarian’s score, which alternates between extreme violence and gently rocking, almost pastoral serenity, this first section presents the kind of odd little moments that appear in dreams. At one point the four dancers enter drenched in water and smack the ends of their wet hair against the plastic curtain. The effect is unsettling, but why? Is it that the worst fears are the ones we can’t quite name?

Indeed, “Elsewhere” is at its most arresting when words disappear altogether, and we’re left with Beiser’s cello playing a repeating pattern of major and minor thirds. (The eerie composition is Michael Gordon’s “Industry.”) As the music cycles back on itself, the four dancers appear covered in mud, their hair completely covering their eyes. They slowly writhe on the cots, gradually wrapping themselves in muddy sheets until they are completely cocooned, with limbs and all other human features obscured. Beiser plays agitated variations on the major-minor third theme as the sound of the cello becomes electronic and distorted. It’s a frightening enough scene — four goopy ghosts sitting upright in bed while grating sounds play in a never-ending loop — but then the unthinkable happens: One of the muddy forms begins to crawl out from under the plastic sheet, worming its way toward the audience.

It’s a jarring violation of space, a brilliantly transgressive moment in a show that’s already tossed out a half-dozen nightmare-worthy images — not that you’re able to think about it that way as it happens, with your heart in your throat and the feedback from Beiser’s amplified cello rattling your brain. The night I saw the show, the crowd sat bolt upright and watched as the other three mud monsters crept forward into the stones at the foot of the stage. Several people held their hands to their cheeks, either in dismay or in an effort to protect their ears from the now almost unbearably loud cello sounds.

Beiser does finally relent, though the cello seems to play on without her for a few seconds after she sets it down, and then she takes out a box-cutter, slices a long slit in the plastic curtain and walks through it. Buried in the stones she finds a stool and an electric cello, which she takes out and starts playing. (By this point I was so spooked that even the movement of Beiser’s shadow on the theater wall made me jump.) It’s here, out from behind the curtain, on the rocky landscape of the subconscious, that the real story of Lot’s wife begins.

To quote too much from “Salt,” Wilson’s text for this reframed Bible story, would take away from its many poignant surprises, but suffice it to say when Lot’s wife looks back at Sodom in this version of the tale, she’s got good reason. Davis’s unusual voice is perfect for this role, and those who last saw her at BAM in the recent revival of Philip Glass’s “Einstein on the Beach” will detect Glassian echoes in her heartbreaking repetitions of Lot’s wife’s skittish lines “our front door was pried open” and “we were thrown out of our home.”

The hair-raising climax of the piece comes when Lot’s wife, speaking from her “salted jail,” finally sings in harmony with Beiser, whom she addresses as “the woman in the next cell.” At last, two one-way transmissions — Beiser describing apocalypse at the beginning of the opera, and then Lot’s wife answering back with a recitation of her own traumatic ordeal — become a real conversation. The two women turn and address the audience, singing: “If you hear her / Scratch your name / Scratch your story / Scratch your song.”

We do hear her — hear them both — and the sound is as inspiring as it is upsetting. The two women manage to connect with each other even after respective worlds have been destroyed. Lot’s wife got turned into a pillar of salt, but that wasn’t the end of her. But if stories never die, does that mean suffering is eternal, too?

When the four dancers stand up to take their bows, it comes as a shock. It was too easy to forget that they were there all along, under the mud and the rocks.

Listen to Maya Beiser talk about the inspiration for ‘Elsewhere’: