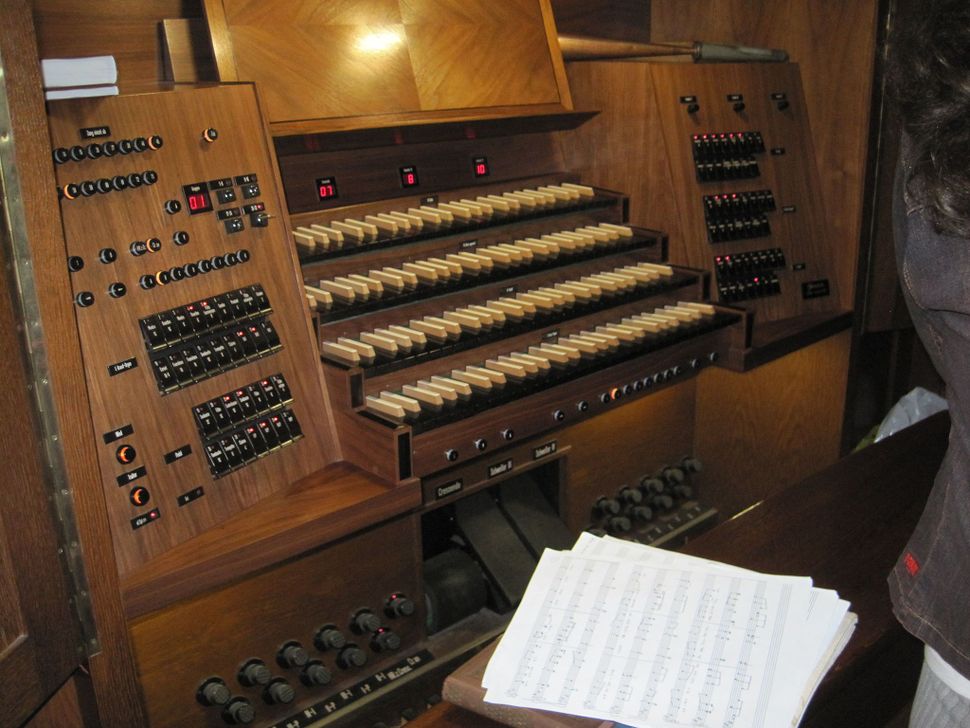 Secondary keyboard of the organ at the Dohány Synagogue. Image by Wikimedia Commons

To some lovers of classical sounds, organ music seems irremediably goyish, despite outstanding achievements by such Jewish composers as Aaron Copland and Arnold Schoenberg in writing for the so-called “king of instruments.” For these, “The Organ and Its Music in German-Jewish Culture,” recently published in paperback, will be a real ear-opener. Its author, musicologist Tina Frühauf, notes that “until the Middle Ages, the organ was not officially permitted in any Christian liturgy inasmuch as instrumental music was associated… with the Jewish services once held in the temple at Jerusalem.”

Even after organs appeared in churches and became taboo for synagogues, there remained some Jewish fans of organ music, notably the 15th century Italian humanist philosopher Yohanan Alemanno, who in “Solomon’s Desire,” his commentary on the “Song of Songs,” included praise of a performance at the Mantua court by the German organist Conrad Paumann, a touring superstar of the 1400s. By the 18th century Haskalah, Europe’s Jewish Enlightenment movement, the time was ripe for a return of the organ as liturgical instrument. In 1810, at the Jacobstempel synagogue in Seesen, Lower Saxony, an organist named Gerson Rosenstein first participated in services. Debate was sparked and in 1818, Eliezer Liebermann, an Austrian Talmudist, wrote “The Bright Light,” a treatise which argued that organ playing had been the “Jewish custom in the Temple prior to the Christians’ adoption of the instrument.”

Some rabbis worried that if organs needed repair or adjustment on Shabbat, would that qualify as work, and if so, would a Shabbas goy be required to do it? An 1845 resolution decided that according to the Talmud, music-making qualified as a “display of art” and therefore was not work. The Vienna chazzan Salomon Sulzer opined in 1869 that a special virtue of the organ was that it was loud enough to easily “cover dissonances” of inferior cantors guilty of “trivial vocal ornamentations” or “weepy Polish virtuosity,” resulting in “that self-satisfied pseudo-artistry which often attacks esthetic beauty as a mildew attacks a seedling crop and poison it.” In 1933, Berlin organist Ludwig Altman was hired by one congregation only after he proved he could play thunderously enough to drown out a painful-sounding cantor.

Organ playing in European synagogues was violently halted, along with so much else, in 1938, but has enjoyed an afterlife in Israel, where many modern composers, such as Jacob Gilboa, Josef Dorman, and Ari Ben-Shabtai, are inspired by the instrument, even more than in today’s America.

Listen to Aaron Copland’s Symphony for Organ and Orchestra (1924] here.

Listen to part of Arnold Schoenberg’s “Variations on a Recitative for Organ (1941)” here.