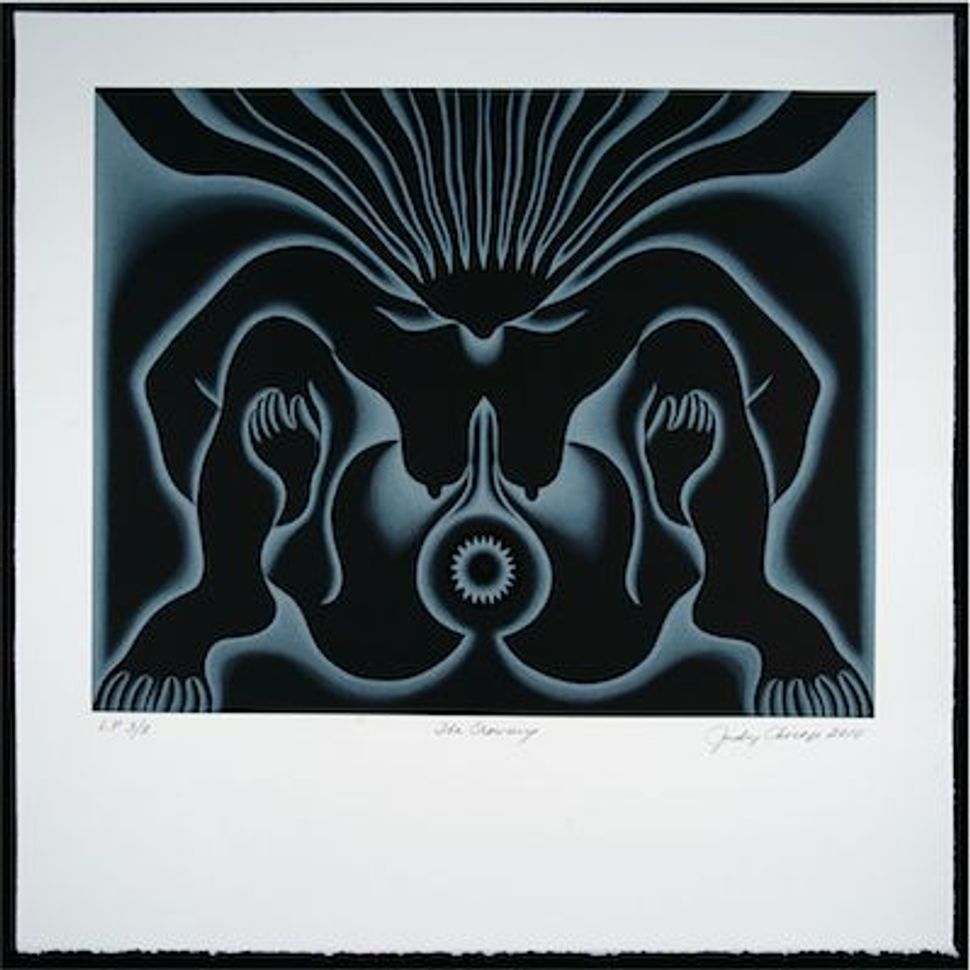 The work of pioneering American feminist artist Judy Chicago is not for the prudish. Her current exhibition at Ben Uri The London Jewish Museum of Art displays graphic imagery of the male and female form alongside pieces addressing the notion of female subjugation and masculine power. Yet nestled next to artworks that can challenge and shock are collaborative needlework gems of absolute beauty. 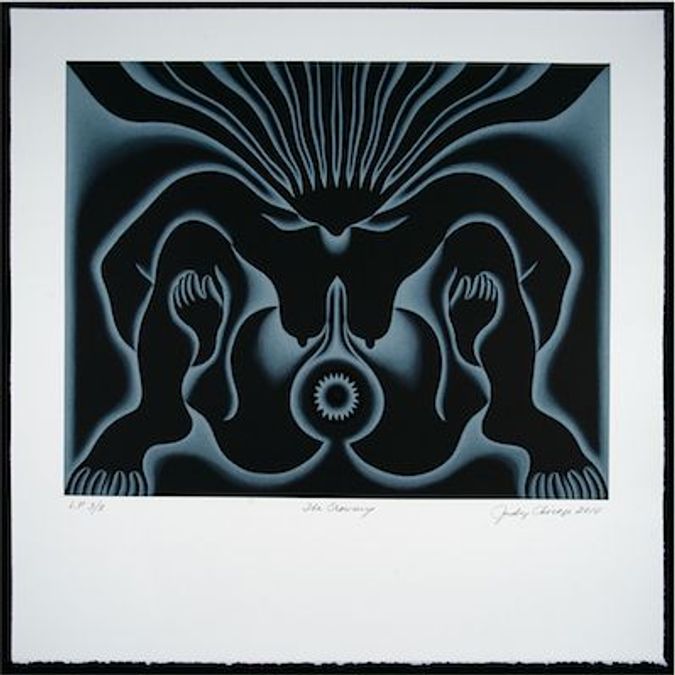 Approximately 170 examples of Chicago’s works are on display in her first U.K. exhibit since 1984. Selected from both her personal archive and from public collections in the U.S., they range from her early feminist images to unseen recent pieces, such as a seven print series, “Retrospective in a Box.” Exploring themes including autobiography, erotica, feminism, pregnancy and birth, the exhibition is contexualized with pieces from artists Louise Bourgeois, Helen Chadwick and Tracey Emin, whose work has tackled similar issues. Two smaller shows are also being held at galleries in Soho and Liverpool.

Chicago’s work has been at the forefront of the women’s art agenda since the 1960s, though she is most renowned for her 1979 installation, “The Dinner Party.” An icon of 1970s feminist art, the work features a huge triangular table and place settings for 39 significant women from history. Along with other works in The Elizabeth A. Sackler Center for Feminist Art at the Brooklyn Museum, where it is permanently housed, the installation helps account for almost a third of visitors at the museum. “People come from all over the world‘to see [it] which attests to its ongoing relevance to both women and men,” Chicago told the Forward by email.

According to Chicago, feminist art is alive and well and essential in highlighting gender inequality. “It would behoove the art world to acknowledge this rather than pretend that it doesn’t exist, doesn’t matter and is no longer relevant” she wrote. She explains that when she attended graduate school her male professors hated her imagery, which “expressed my concerns as a woman and incorporated gender specific forms.”

Certainly women artists are now exhibiting widely and can articulate themselves freely in ways that Chicago could not when she started out. But there are still challenges and Chicago is clear: female artists and historians should not believe that feminism and feminist art are passé. Only 3 to 5% of major permanent collections in the U.S. and Europe are by women artists, and Chicago believes that the statistic “reflects …[an] institutional resistance towards acknowledging women’s cultural and artistic contributions.” She adds that it will take a major shift in consciousness before the situation will change.

Artists like Chicago have been influential in elevating textile techniques to museum status. The Ben Uri has included two “craft” pieces in the current exhibit; “Smocked Figure” (smocking and embroidery, 1984), a large image of a pregnant woman, and there is the poignant, bloody “Birth Tear/Tear” (embroidery on silk, 1982). Both are taken from “Birth Project,” a series that comprised the work of 150 needle workers, who carried out Chicago’s designs under her guidance.

Within Ben Uri’s four small rooms only a fraction of Chicago’s phenomenal output is shown. One room alone is devoted to “Autobiography of a Year” (1993-4), a visual diary of 140 drawings.

The dense explanatory texts can hinder interpretation. Chicago’s images stand alone and can do the job well enough without them. Indeed the point that some of the work makes is in its directness. The striking lithograph, “Aging Woman/Artist/Jew” (2012) of a naked Chicago, is one example. Under her legs it states” “Everyone would see who she really was.”