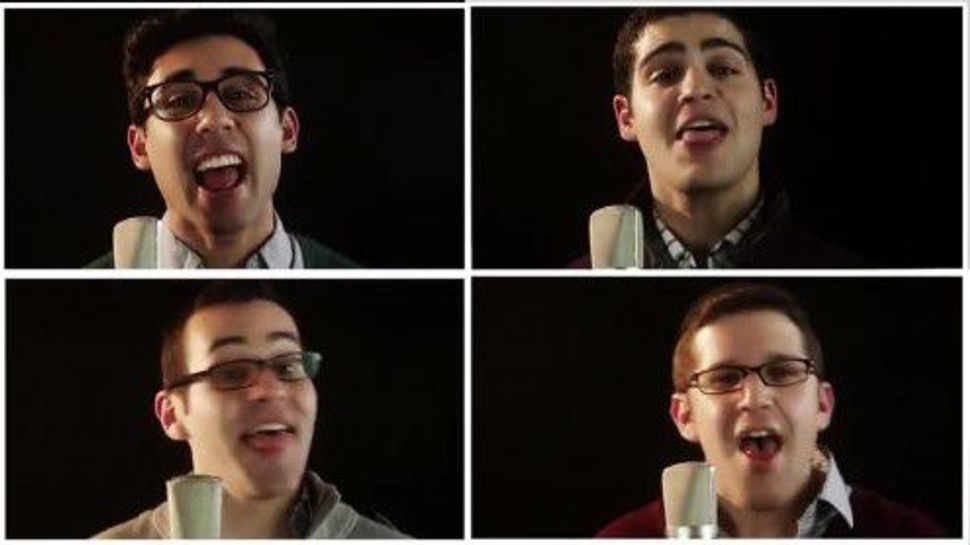 It seems like so long ago that The Maccabeats warmed the hearts of millions and inspired thousands to take pop songs and make Hanukkah themed YouTube videos. Those friendly Yeshiva boys have split, seemingly, into StandFour and the intriguingly named The Maccabeats. While the schadenfreudistic side of me would love to see live footage of the split, the bubbe side of me can’t help but note that they are all growing up so nicely! 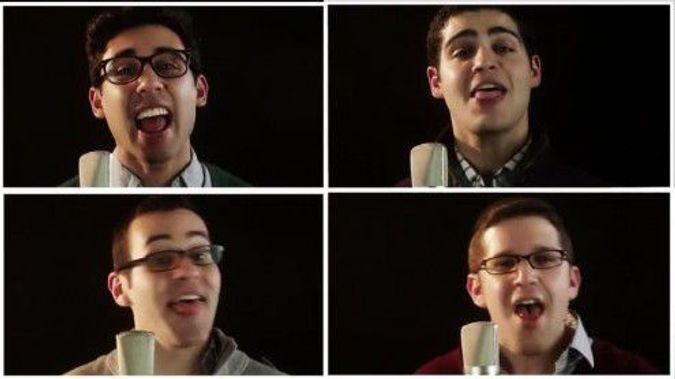 StandFour (they know what they stand for!) have a highly produced parody medley of pop songs with a nice reference to the silliness of it all — “random jewish references in a Hanukkah song.” But this time around all seems a little serious and samey — even to the white frames floating around the video. It feels a little like this singing might be a career now and maybe it’s time to find a nice wife and settle down. Noey, bubbele, why not spill jam from the doughnut again, that was so funny!

The Maccabeats have written an original song — an original song from the original Maccabeats as our friends at Jewcy pointed out. To my judgmental surprise this is actually a quite lovely song and nicely produced. Most importantly, Uri Westrich’s touch on the video is again exquisite. For him there’s a career!

In my next life I want to be a character in a video by The Fountainheads at Ein Prat. Their enduringly cheerful worldview is somewhere between inspiring and nauseating — “Our doughnuts have 60% more jelly than ever before.” Some of their previous videos have been good enough to save the Holy Land from Hellenistic influence, sadly not this one.

Do you know Mark? Do you know a Mark? Any Mark at all? Perhaps it’s Marc? This is not a music video but it’s definitely a Hanukkah video that our friends at Heeb found and uploaded. It puts the Hanu-man back into Hanu-kkah for 34 strange seconds.

I don’t know what they are feeding the students of Yeshiva Reishit in Beit Shemesh, Israel but it puts a spring in their step. A spring up and over on the yeshiva balcony. Perhaps honed on simcha dancing they have the moves that make you doubt that they are Torah scholars. Lest you doubt too much, they tell you that “Jews is what we are” just before rhyming “Torah” with “menorah” — lyricists is not what they are. Once they take you outside the beit midrash though, they provide two minutes of excellent dancing fun (although it is a four minute video).

This is only a preview, but a preview for Lipa Shmeltzer’s “Oy Chanukah” DVD. If you’ve only seen him as a breakdancing robot, this is Lipa as you’ve never seen him. But if you like your men in furry hats, this is for you. Streimels and brass. And Lipa is a real performa.

And, while we’re talking about robots, here’s the Technion’s attempt to light their menorah. Apparently they were out of matches.

Matisyahu may no longer have a beard but he has a new Hanukkah song. He’s “lighting up the night like a Lion of Judah.” If Matisyahu helps you get through the long winter nights, this will help. If not, not.

OK, the shammas is both a candle and not a candle. So this is both a YouTube Hanukkah song and not, because it’s hot and Hanukkah, but not a video. Hat tip to Jeremiah Lockwood for Chico Mann’s “Light of Love.” If you think that the festival of light could be the festival of getting it on, then Mann is your man. He’s not Jewish but this DJ and neo-funk artist gets across (along with singer Alecia Chakour) the real sense that “Hanukkah is the light of love that shines on you and me.”

Nes Hanukkah Finally, a Hanukkah miracle. Just when it seemed as though there were only enough YouTube Hanukkah videos for 8 candles and a shammas, along comes Michelle Citrin of “Rosh Hashanah Girl,” “20 Things To Do With Matzah” and Tell Your Zeyde To Vote, fame. For Hanukkah Citrin has gone from spunky to sexy, indeed swinging it huskily enough to be featured on Jewrotica.org. “Hanukkah Lovin’” isn’t earth shattering, but it’s a lovely rendering of a genre that doesn’t get trotted out for Hanukkah much. Plus, between Lipa and the yeshiva boys above, there weren’t many adult women singing and singing proud. And Citrin always does that.