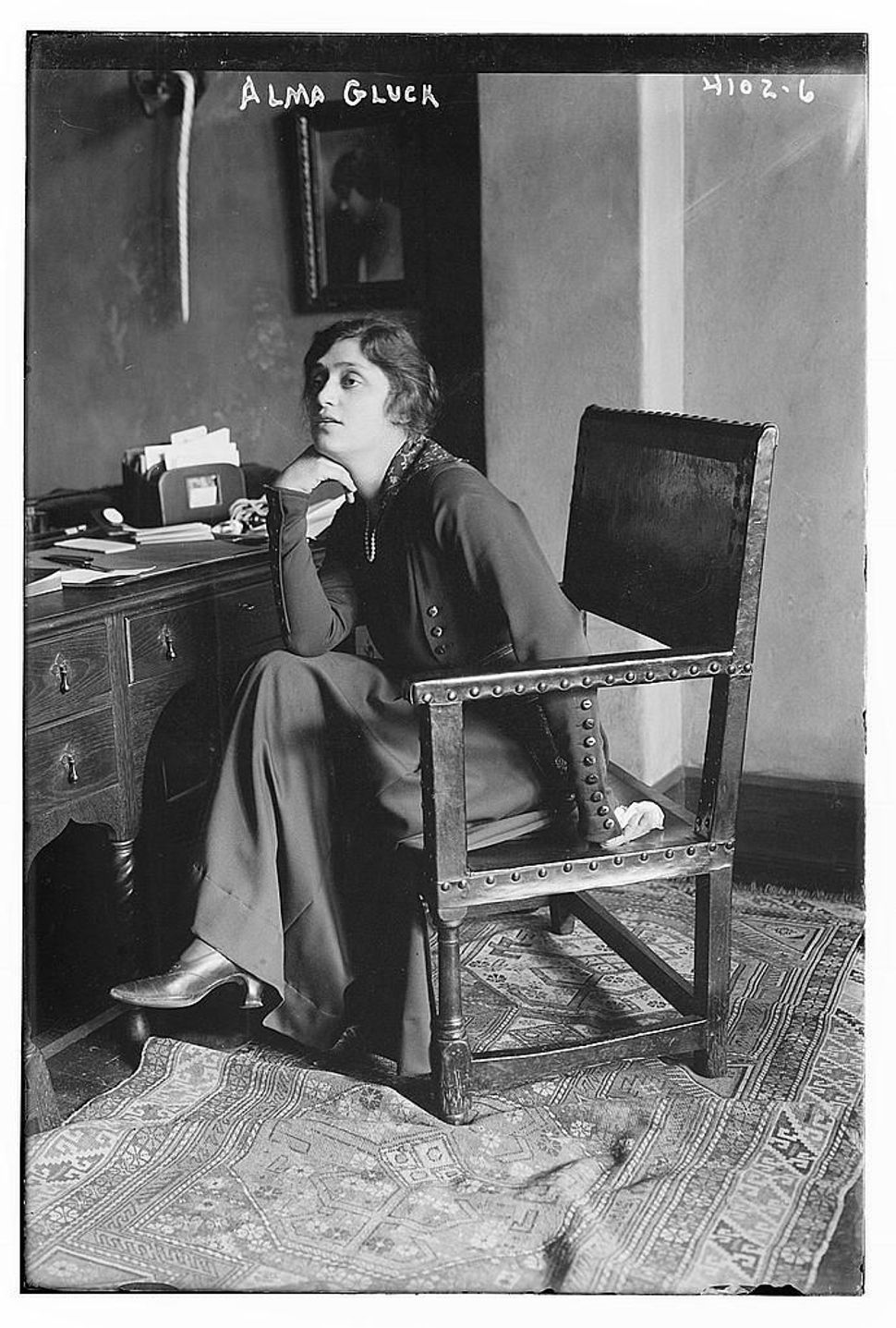 Image by Courtesy Library of Congress

Paradoxically, the first recording by a classical artist to sell over one million copies was “Carry Me Back to Old Virginny,” the minstrel version of a folksong cut in 1916 by a Romanian Jewish soprano who knew bupkis about Old Virginny. As we learn from a cogent chapter in “The Arts of the Prima Donna in the Long Nineteenth Century,” Reba Fiersohn (1882-1938) who performed under the stage name Alma Gluck, made a hit in this unlikely repertoire, also recording such Southern-themed numbers as Stephen Foster’s “Old Black Joe.” The chapter’s author, Susan C. Cook, a University of Wisconsin music professor, analyzes Gluck’s chaste voice with sparse vibrato, which can be admired in a variety of CD reissues and MP3 downloads.

Cook places the songbird in the context of Jewish performers who employed blackface (including such vaudevillians as Al Jolson and Eddie Cantor), noting that “Carry Me Back to Old Virginny,” evokes “nostalgic loss, voiced by a devoted ex-slave who longs to rejoin his previous owners in the afterlife.” Cook adds: “Gluck’s participation in the mammy masquerade helped her to secure a place on the high-art stage as a foreign-born Jew… Gluck assimilated into normative American whiteness by donning and doffing the mammy mask, thereby singing from the position of the free-born and the ‘not-colored.’” These rationalizings do not explain the public’s ardent response to recordings by Gluck, whose audible empathy and tenderness separate her from the muggings of Jolson and Cantor.

Gluck’s combination of what Romanians call “dor” (longing, a word which in Spanish is translated as “duende,” or in German, “sehnsucht”) with a degree of Yiddishkeit give her rendition special expressivity. Cook admits that Gluck’s technique was admirable: “Her use of pianissimo dynamics to close, civilizes the minstrel-show ditty through the artifice of high culture.” In her compassionate performances, Gluck emulated other musicians inspired by African-American song, such as Antonín Dvořák, in an explicitly 19th century mindset. Gluck even gave recitals onstage circa 1912 dressed in hoop skirts as a prototype of the craze for the Old South later sparked by other American Jewish creators, with one example being Edna Ferber’s 1926 novel “Show Boat,”, adapted as a Broadway musical by Jerome Kern and Oscar Hammerstein II in 1927. Anticipating these landmarks in American popular culture, Gluck was also decisively, movingly identifying with her adopted country and its lore.

Listen to Alma Gluck, accompanied by her husband the violinist Efrem Zimbalist, in “Hatikvah” from 1918, followed by Maurice Ravel’s “Meyerke mayn Suhn” here.

And find Alma Gluck in an aria from an opera by Rimsky-Korsakov here.