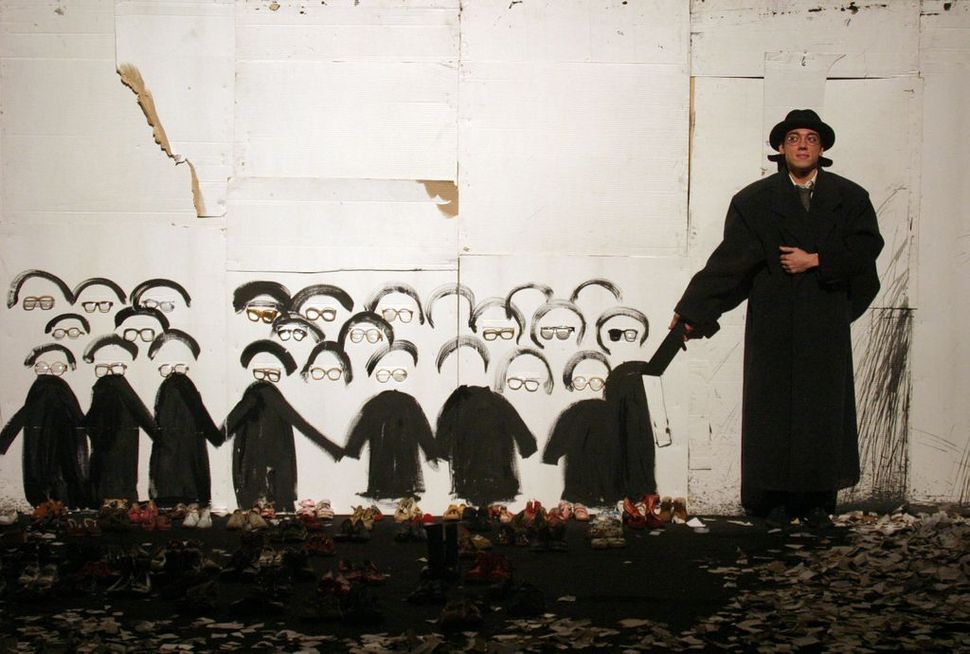 Though there are words in Dmitry Krymov’s “Opus No. 7,” both in the first part, titled “Genealogy,” and in the second act titled “Shostakovich,” much of the work’s punch lands through other kinds of theatrical language. Even the title evokes a piece of classical music, and the abstraction of painting.

The number 7 also refers to the seven members of the cast: Maxim Maminov, Mikhail Umanets, Sergey Melkonyan, Arkady Krichenko, Natalia Gorchakova, Maria Gulik and Varvara Voetskova. Krymov said in an email that it is also his favorite number. It is also Krymov’s seventh work. Another notable 7 is that Shostakovich’s seventh symphony was about war, Krymove pointed out.

Part one evokes the loss of Jewry in Russia through Stalinism and Naziism. Part two considers the fate of creative genius under a dominating and oppressive government. The images and sounds, including eight grand pianos that crash into each other have the power of dreams. Unlike dreams, the images linger. In “Genealogy,” the words come from a poem by Lev Rubinstein, whom Krymov described as a person he loved very much, and one of Russia’s best writers. In part two, the words are those of Shostakovich in speeches. The character of Shostakovich in Krymov’s work is associated with Charlie Chaplin who was a master of expressive gesture.

Krymov conceived of and directed the piece. He worked as a set designer early in his career, then left to be a painter, returning to theatre in 2002. Today he is the head of the workshop at the Department of Set Design at the Russian Academy of Theatre Art (RATI-GITIS) in Moscow. He is half-Jewish, which he mentioned in a recent interview with the Forward. For Krymov, “the history of Jewish people means not only the Jewish people, it means our history, each of us. I have Jewish and Russian. It’s my story, not only the one half. It’s the story of US, with big letters, our background. When we want to touch this wall or these photographs of our relatives in our past and want to know who they are, who they were.” Krymov said he has photographs that he knows are his relatives, but he did not ask who they were when he could have, and now there is nobody to ask. “And I am afraid of this,” Krymov said. “I want to go this way but I am afraid.” To explain that remark, he uses an image — which is the way he communicates.

“You see it’s like a small lake with water when the water is not clear. The water is so misty that you cannot see the bottom. It is a mesmerizing feeling. You want to put your hand into it, but you don’t know where the bottom is and who lives there. And at the same time you cannot leave.”

The people who come to the wall, in “Genealogy,” are young, curious. They want to play with the past. It’s as if, Krymov said, one went to the Wailing Wall without thinking about what it was, and started touching the Wall and talking about the happenings of the day.

“The wall would respond to us. First a bit, and then more and more. And at the end we would unite with that wall. And so I made a show about this unification, about something that we don’t know.” The wall and the set in “Genealogy” are designed by Vera Martynova. The original music is by Aleander Bakshi, and includes classical-sounding choral music, something more like jazz, and Yiddish-sounding melodies. Usually, Krymov said, he only brings in music when he can “touch the material of future performance,” late in rehearsals. But in the case of “Genealogy,” Bakshi was with him from the beginning. The music is fully integrated with the company, with whom, Krymov said, he also collaborates.

“When I have created 40 percent of the idea, I ask them to come to our room and I tell them the idea,” he said. “Not only actors, but also artists create many things with me. It is a very important part of my work.”

Dmitri Shostakovich (1906-1975), was not Jewish, but used Jewish themes and melodies in his work. In his Thirteenth Symphony, subtitled Babi Yar, he set poems by Yevgeny Yevtushenko, about the massacre of Ukranian Jews during World War II, to music. He fell in and out of favor with the Party throughout his life. In Krymov’s piece we see him, played by little Anna Sinyakina, giving speeches to the party, and almost becoming a puppet himself.

Maria Tregubova did the scenic design in “Shostakovich,” and the music is all by the Shostakovich himself. Wearing a mask, said Krymov, “cost him a lot. That’s why he reminds me of Chaplin. Everyone is beating him, but he’s alive. It’s a very dramatic way of survival.” The crashing of the grand pianos perhaps suggests Shostakovich’s frustration, as well as the oppression he endured. It’s also just a tough thing to watch—expensive instruments being treated like props. “Shostakovich was a composer. He was not a soldier, but he wrote about the war, where people kill each other. I imagine when the composer uses the piano every day he loves and hates the piano at once, because it’s his object of everyday work. Like me for example, when I was a painter I had the same feeling about my canvases and brushes. I loved them I loved the smell, but I hated them, all of these things in one moment. It’s music and war in one thing,” Krymov said.

While the most memorable puppet is the 17-foot tall Babushka puppet (designed by Victor Platonov) who is both Mother Russia and also Shostakovich’s own mother, with whom, Krymov said, the composer had a very special and close relationship, all of the inanimate objects that seem to come alive really are puppets, whether they are small shoes in “Genealogy” or dancing pianos. Andrey Schyukin is credited with “scenic movement.”
“A doll, a puppet, has this magic trick,” said Krymov. “It’s dead and alive at the same time. And it carries many meanings that bring the theatrical story into another level, another mystical level.”

Wherever the giant Babushka puppet is, the audience’s eyes follow. She has a sweet expression, and a flowered shawl, and she terrifies and entices at once. For Krymov, she’s both Mother Russia, and the stereotypical Jewish mother. He even has a joke:

“What’s the difference between a Jewish mother and an Arab terrorist?

“With a Jewish mother, you cannot come to an agreement.”

The love-hate relationship Shostakovich had with his own mother, and with Mother Russia, is still relevant for Russians, who find it “very hard to let go of the greatness and glory of the country because if you take this away, there’s nothing left.

“Everyone wants to be an elephant, something bigger than they are.”

The connection between the two parts of Opus 7, Krymov said, is “more on the sensual level than logic.” One such connection is suffering. “It is hard to live, hard to survive. And it’s much harder for a Jewish person. “And it’s even harder for a genius person.”

What Krymov is saying is that each member of the audience has to find his or her own meaning. Like the lake of the past that he describes, it is unknowingness that is both scary, and mesmerizing. And like a misty lake at least some of what a person could see will be his own reflection.