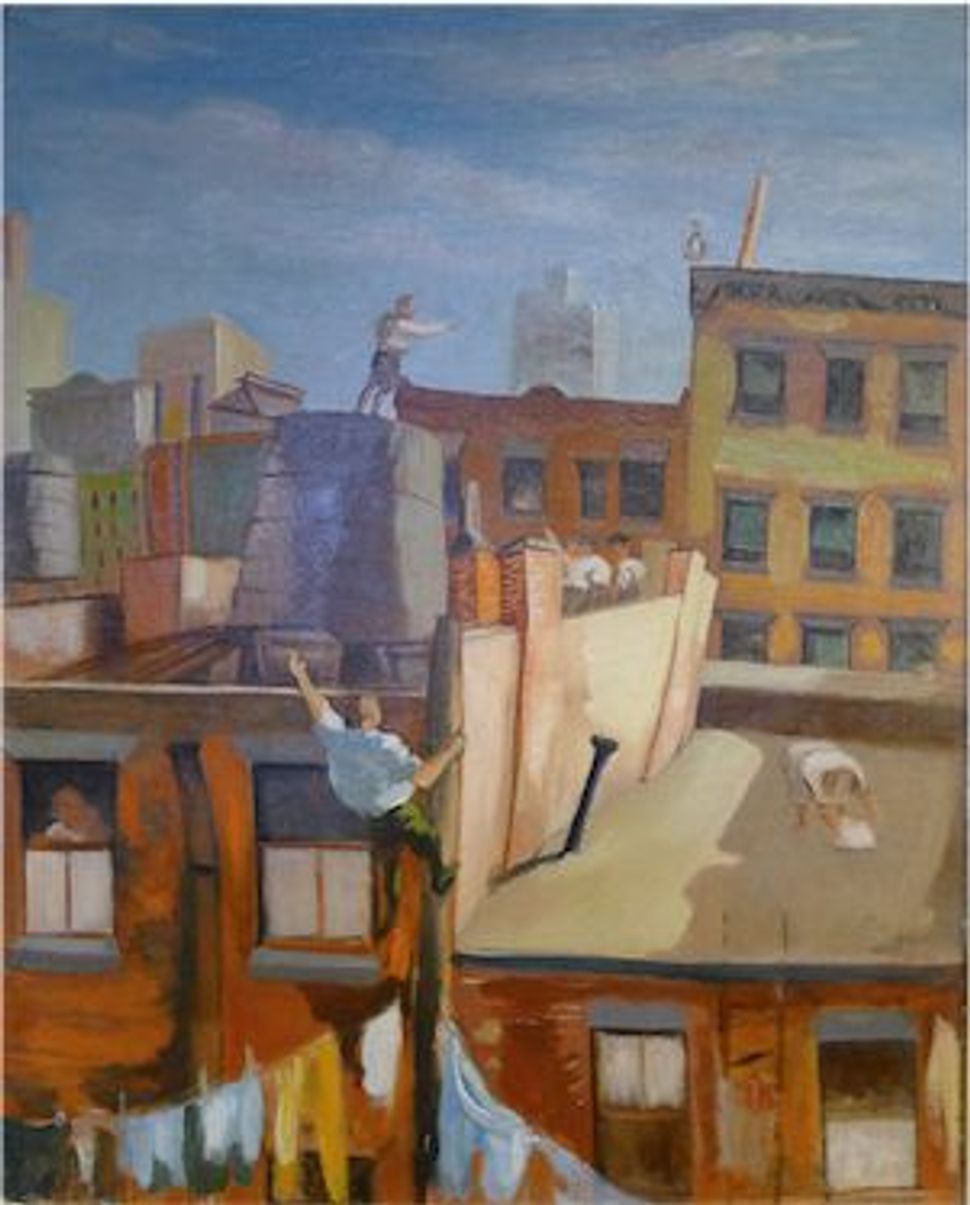 “The Emigrants” a circa-1930 oil painting by Julius Bloch, is the signature image in a new exhibition at the National Museum of American Jewish History in Philadelphia, “Jewish Artists in America 1925-1945.” “It conveys the experience of immigrants, one that is intimately and deeply tied to this museum,” said Josh Perelman, NMAJH’s chief curator and director of exhibitions and collections. “It is evocative and beautiful, and it tells a deep story.”

The painting by Bloch is one of 21 artworks (18 paintings and three lithograph prints) from the collection of Steven and Stephanie Wasser that tell the un-romanticized story of immigrants and all Americans during what many would argue was the most trying period in the 20th century.

On view at the museum until the end of June are Depression-era works by political artists, working independently or under the auspices of the Works Progress Administration, chronicling the hardships seen on city streets and in rural fields, at work and at home. Among them are Aaron Berkman’s”Subway,” Louis Ribak’s “City Rooftops” and Saul Steinberg’s “One Summer Night.”

Steven Wasser, a Boston-based businessman and collector of social realist art, originally loaned the museum “Ida at the Easel,” a painting by Moses Soyer, for its core exhibit. “We thankfully found a good moment to show more pieces from the Wasser collection,” Perelman said of this new exhibition. This show compliments a concurrent one called “Beyond Swastika and Jim Crow,” about Jewish refugee scholars at black colleges.

Visitors to the museum who might have recently seen “The Radical Camera: New York’s Photo League 1936-1951” at either The Jewish Museum in New York or the Contemporary Jewish Museum in San Francisco might draw connections between it and the paintings from the Wasser collection.

Both exhibits offer visual presentations of social realism and suggest the cross-pollination among members of the Photo League, the Art Students League and the WPA. “They were all immigrants or children of immigrants, operating in left-leaning circles and observing this challenging period in history for both the United States and the world from a social realism perspective,” Perelman said. “It was the political and artistic ethos of the New Deal era.”

Perelman likes “The Emigrants” a great deal, but he has another favorite piece in the exhibition. It’s “City Rooftops” by Louis Ribak. Perelman appreciates it for the quintessential New York scene it depicts, and for the Lower East Side nostalgia it elicits. But he also likes the hints of abstraction in the painting. “It’s a subtle twist on social realism. It plays with light and color,” he reflected. “It differs from the others in that it has a real joyful mood.”