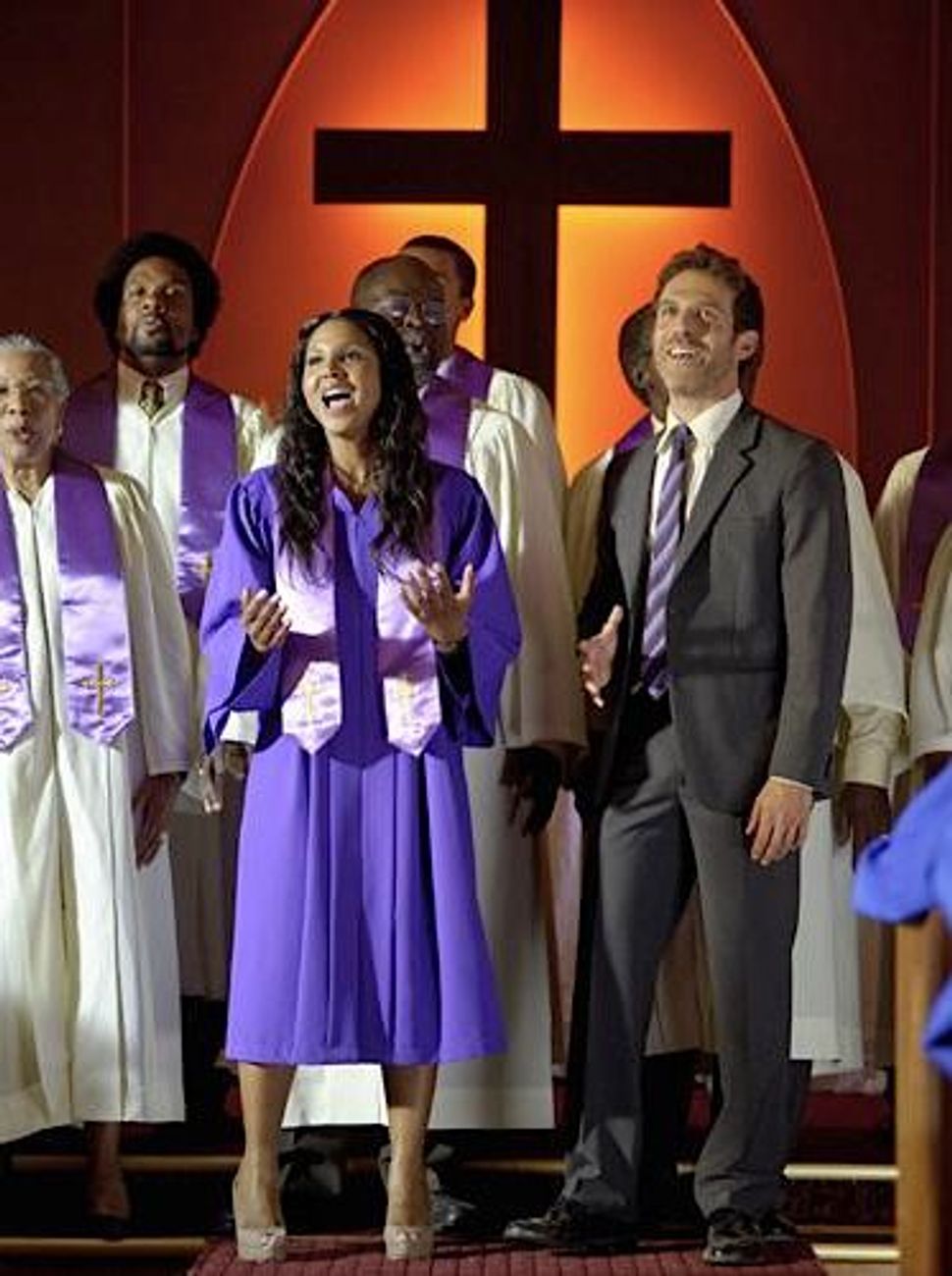 Image by Courtesy of Lifetime 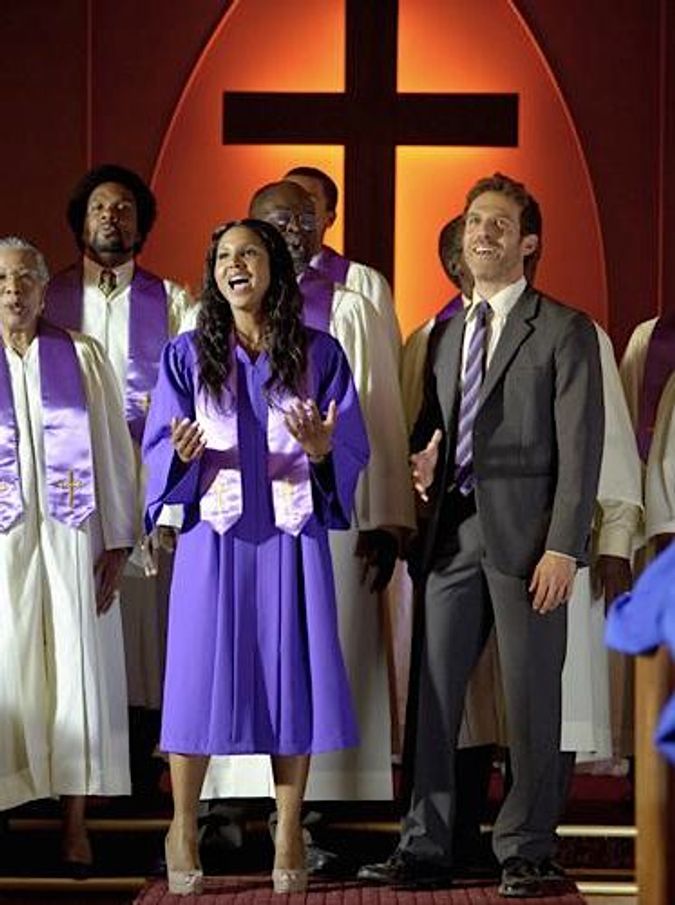 Image by Courtesy of Lifetime

It’s the misnomer “interfaith” that makes “Twist of Faith” mildly uncomfortable. We’re used to seeing intermarriages on TV and in movies. It’s almost easier to count the number of times that the Jewish hero ends up with a Jewish woman than it is to count the times he ends up with the American gentile woman; the former is so infrequent.

But we’re used to watching intermarriages and inter-dating with couples that are only residually or ethnically Jewish. They eat bagels and lox, drop a few Yiddish words, and otherwise go about their lives. For that matter, their spouses are only residually or ethnically Christian: they sit down for Easter dinner and drink cocktails with their meals. Their lives are inherently secular. Chrismukkah for all!

What’s strange is that “Twist of Faith” is a story about believers, religious doubters, and those who care passionately about God. It’s a story about trying to interpret God’s will, and how we comprehend human suffering. In some ways it’s one of the most admirable attempts to talk about faith and piety ever seen on screen, and it is respectful to Judaism as a religion. Yet it’s also uncomfortably Christian: the only person who can heal the Jew’s suffering is the righteous Gospel singer, and the only community that embraces him as a full servant of God is the Black church. The cantor is only the object in a story about Christian mercy, the recipient of other people’s acts of kindness. Also: he is possibly Jesus.

Part of the reason that “Twist of Faith” stands out is that there is no easy way to visualize faith. The camera can show a man wearing a kippah, or a black hat, but the camera cannot say anything about what happens inside. We watch the most fervid prayer without knowing if the words have meaning. Faith is something that has to be told, not shown. We have to listen to the believer express his faith, watch his deeds and then decide if he does so fully. From the other side, seeing a tallis and kippah elegantly folded, lying on a bed for others to put away, doesn’t tell us if the loss of faith is complete. The yearning for God can still lie within.

Such is the case in “Twist of Faith.” After the murder of his wife and children, and after a stultifying shiva, the cantor abandons Judaism and boards a bus headed to the deep South. He lives there as a vagrant, his clothes gradually becoming more disheveled. He sleeps on the ground outside of the Church where he is discovered by Toni Braxton’s son, Asher. (Toni Braxton is a good actress, but it is still impossible not to see her as Toni Braxton.) Asher believes in the Gospels and Christ’s message of mercy, and conspires with his uncle to care for the stranger, and to comfort him. They recognize his lost soul.

Yet even when he’s most separated from Judaism, the Cantor still retains shards of his faith. We watch him pray before eating food. He plays the Yiddish classic “Afn pripetshik” on the Church piano. When asked to say grace, he offers an English translation of the Shehechiyanu.

The point is that he wants to return to Judaism — only he falls completely for Toni Braxton. She supplants Judaism as the source of his religious strength. He returns physically to New York, and re-garbs himself in tzitzit and kippah. But he cannot spiritually re-transition. He goes back to Alabama, back to her arms, once again removing his religious clothing. This time the visuals speak. They tell us the story of his faith: it twists. It becomes faith in a person. Judaism can be abandoned. She heals him.

Is this interfaith? Only in the sense of two partners of different religious backgrounds coming together. This is a Christian story, and the cantor is a type for Jesus. He is a pious Jew that no longer fits in his community, a carpenter (this is emphasized constantly), and we can make an analogy between the cantor’s trip to Alabama and Jesus’s time in the wilderness, when his faith was tested. “Twist of Faith” is not an “interfaith love story,” but a sermon on the virtues of the Christian message and morals.

I’ll admit that I’m particularly attuned to this right now. At a recent event at the Harvard Divinity School, the editors of the new book, “My Neighbor’s Faith: Stories of Interreligious Encounter, Growth, and Transformation,” explained their rationale for structuring the book around contributors’ personal stories of interreligious encounters. They explained that storytelling acknowledges the speaker’s right to tell his story. In the moment of storytelling, the personal experiences of the speaker are validated and his identity is acknowledged. Storytellers force us to leave our positions as passive readers and to confront what it is like to see the world from their perspective, to be a Muslim at Harvard College decades ago, or to leave an evangelical home for a more liberal denomination of Christianity. The universalism of trying to be a religious person in a world where others don’t hold your beliefs cuts through the different backgrounds of the contributors. People respectfully see each other as equals. And that’s where interfaith dialogue begins.

But “Twist of Faith” shows how tenuous the act of storytelling is. In particular, the movie exposes how tightly bound our stories are, and how hard it is to disentangle them. “The Jew” has been the other in Christianity for millennia. “The Jew” is an essential part of the Christian story, used to validate Christianity as God’s truth. Movies like “Twist of Faith” should exist, and I hope that we’ll have TV movies about the merits of Judaism; they serve their purpose. But we cannot label them “interfaith love stories” when they weigh so heavily to one side. We cannot label them interfaith when only one side speaks.

Watch a preview for ‘Twist of Faith’: