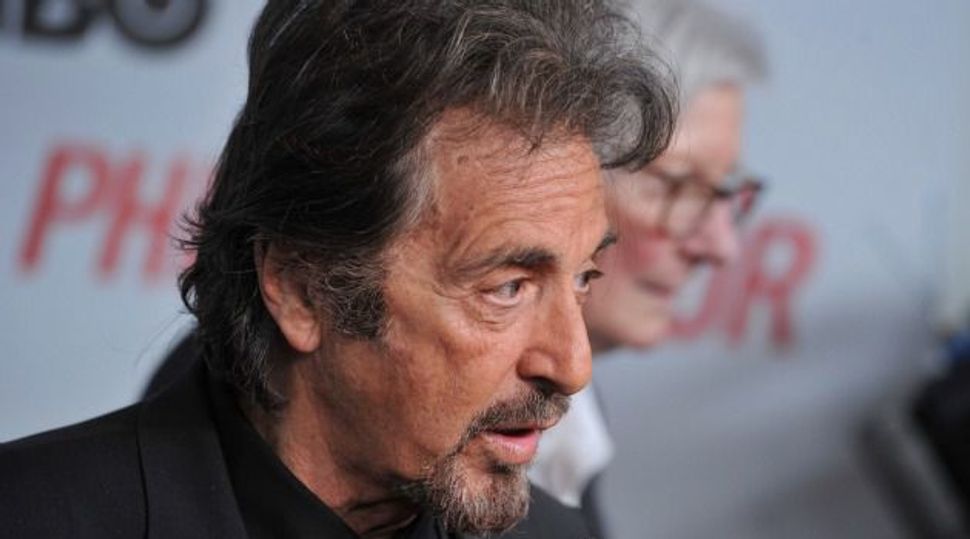 Just about any moment in Phil Spector’s life could be made into a captivating movie: the years when he invented the Wall of Sound, wrote some of the greatest, most successful songs of all time, and turned the anonymous record producer into an artist, even a visionary; the time he spent with George Harrison and John Lennon recording their first solo albums; his tortured relationships with Paul McCartney and Leonard Cohen; and his retreat from public life in the late-1970s, when Spector became a kind of Charles Foster Kane, alone in a castle of his fortune. (How audacious would it be to make a movie now, with Spector serving nineteen-years-to-life in a California prison, about his rise to fame?)

The events of HBO’s “Phil Spector” (written and directed by David Mamet) are the behind-the-scenes preparations for the first of his two murder trials: witness depositions, meetings with ballistics experts, and, above all, twisted conversations between Spector (Al Pacino) and one of his attorneys, Linda Kenney Baden (Helen Mirren).

Yet it’s not entirely clear that “Phil Spector” is actually a movie about Spector’s life, or even a movie about the trial. The movie begins with a disclaimer announcing “Phil Spector” as a “work of fiction… neither an attempt to depict the actual persons, nor to comment upon the trial or its outcome.” This initially seems like a legal notice, a way of averting a lawsuit, or an attempt to skirt public criticism for making Spector sympathetic, but the disclaimer turns out to be much more interesting. “Phil Spector” is a movie about the bizarre reverb of life and storytelling, of life and biography, about the way that performers get trapped in their performances, and the way that those legends make it impossible to see the core person–if that person is even still there.

In particular, “Phil Spector” calls back to Russ Meyer’s 1970 cult classic, “Beyond the Valley of the Dolls.” In that camp parody of the sexual revolution (co-written by Roger Ebert), a Spector-manqué named Ronnie “Z-Man” Barzell adopts and corrupts an all-girl musical group, tightly controlling their career. They ultimately drift away from Z-Man and try to regain their lost innocence, but not before a spurned, jilted Z-Man traps them in his castle-mansion and explodes in a psychedelics-fueled murderous rage.

According to the prosecution, Spector became his parody: he seduced a young actress, Lana Clarkson, drew her to his home, trapped her there, and murdered her. Spector and his defense argued that Clarkson’s death was suicide. There were no witnesses.

Did “Beyond the Valley of the Dolls” make it easier to see Spector as a murderer? Did we transpose the events of the film back onto his life? The set designers unquestionably made Phil Spector’s house look like Z-Man’s. Mamet either wants us to make the connection between the two sites, or wants us to question whether the fiction can explain reality. How did the legends about his explosions in the studio affect his trial, or, more importantly, the media coverage of it? It was certainly easy to portray Spector as insane, as a man who had lost all touch with reality, but did that mean he was actually capable of murder?

What the movie reminds us — and this it does extraordinarily well — is that a trial is a staged conflict between two different representations of reality, the prosecution’s story of the events, and the defense’s version.

The key shot turns out to be a brief look, seen initially through a mirror, at Spector’s closet of wigs. The afroed man who appeared in court is a character, a way of hiding himself before the public. The wig hints that underneath there is a real, damaged Spector incapable of playing an instrument or pulling a trigger. But the closet of wigs also tells us that Spector lies; you cannot trust him. There are lots of shots of mirrors, frames, plays, and characters speaking on screens in this movie. Mamet wants to drill into the audience that an audience never see the “facts,” only their representation.

Given the movie’s themes, it’s not surprising that the filmmakers decided to cast Al Pacino as Spector. Like Spector, Pacino has been caught playing the same role for somewhere between 20 and 40 years. He’s cast in movies not for his ability to act (which he can still do; see his role as Jack Kevorkian in his last HBO film, “You Don’t Know Jack”), but for his ability to SCREAM, and RAGE, and then immediately switch to a throaty, guttural whisper where he ostensibly drops his outrage and lets the audience in on the secret truth, the inner feelings. He’s cast for the echoes of the great performances he gave in the past. He’s cast as a reminder of aging. He’s cast as a reminder that what’s new and invigorating in art soon becomes old-fashioned, passé, and mannered.

In that sense, Pacino is Spector. But he never plays Spector. Pacino plays the Al Pacino character dressed and made-up like Phil Spector. There’s a lot to admire about “Phil Spector”: Helen Mirren is fantastic and there are times when David Mamet’s screenplay is alive. You find yourself hoping that this is the start of a new phase in his work, and others when you wonder if he’ll ever make another great movie.

But whether or not you ultimately think “Phil Spector” is a good movie — and more than with other films, the appreciation of “Phil Spector” really comes down to a question of taste — largely depends on whether you think Pacino is a great Spector, a terrible Spector, or whether you think it doesn’t matter if he’s any good at playing Spector since the idea of Pacino as Spector is so interesting and engaging. I’m somewhere between the second and third.