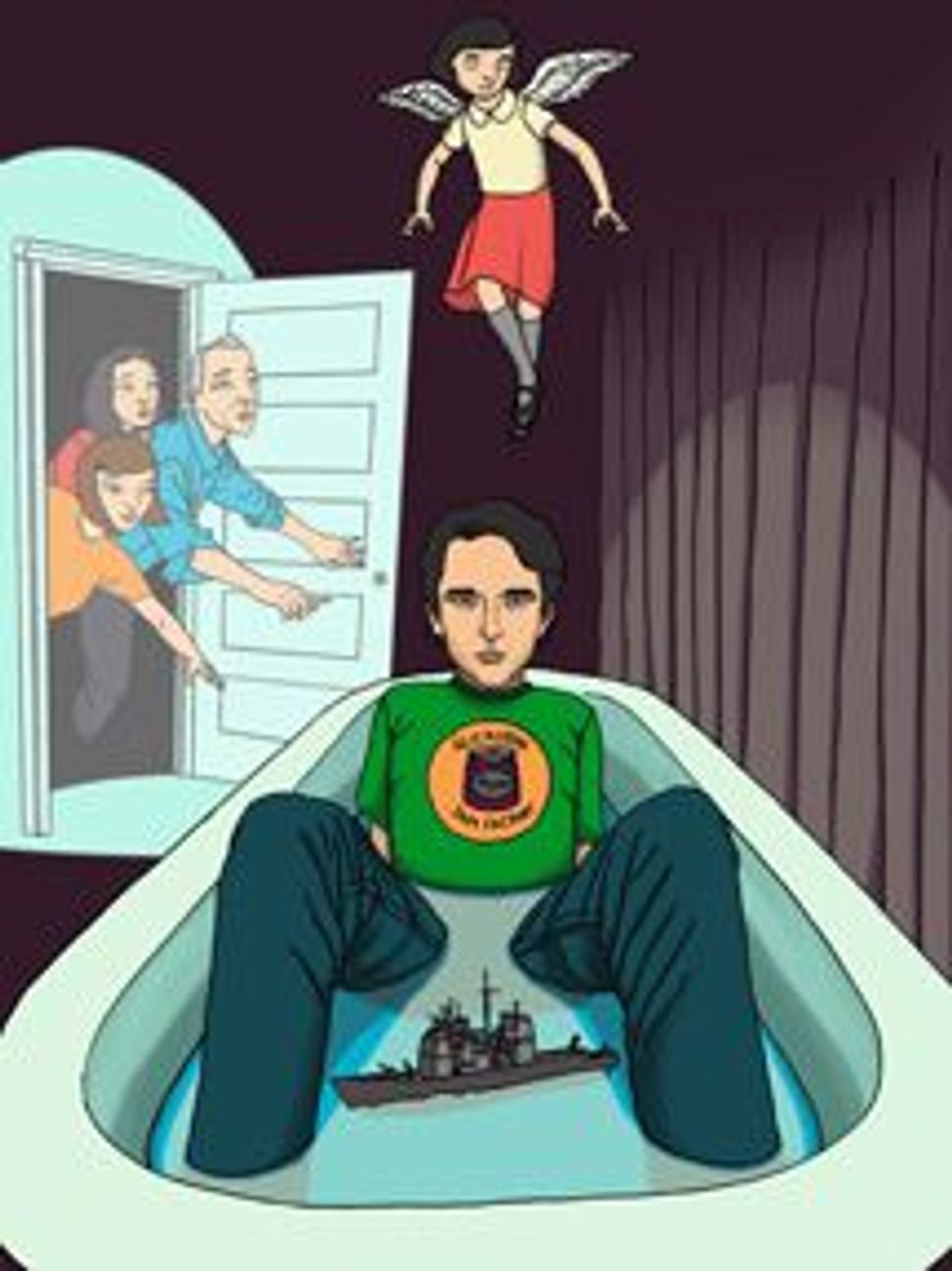 In the play, protagonist and sometime narrator Andy Glickstein is a filmmaker and the son of Holocaust refugees who is about to become engaged. His return home ignites a tangle of memories about his parents’ escapes from Hitler’s Europe that intrude on a busy American life on Chicago’s South Side. Is Roth, a Chicago native, son of Holocaust refugees? Yes. Then where does Roth’s story end and Andy’s begin? “I would move to do as much separating as possible,” Roth insisted, “but I think that would be a fruitless task at the same time. Any experienced reader of fiction or watcher of plays knows that there are critical differences, but at the same time there are also similarities to the author’s life and his creation. You’re borrowing, you’re referencing history … and then you’re making stuff up.”

Roth’s mother, clinical psychiatrist Chaya Roth, was a hidden child, like Raya in the play. In her 2008 memoir, “The Fate of Holocaust Memories,” she recalls her experiences being disguised as a Catholic orphan while living in a Rome convent, where, against her mother’s wishes, she took communion with the other children. His father, Walter, an attorney, was born in Germany and wrote about his pre-war childhood and about his return trips five decades later in his 2013 memoir, “Departure and Return: Trips to and Memories from Roth, Germany.”

“When I started writing this play a long time ago,” Roth reflected, “at that time writing about your past, writing about these memories, was new for our family.” His first attempt at delving into family history, “Gentle Falls a Giant Shadow,” came to fruition in the mid-1980s and received the 1987 Streisand Center for Jewish Cultural Arts Helen Eisner Award for Young Playwrights. But it didn’t quite gel. Roth went on to pen a companion piece, “Born Guilty,” based on Austrian journalist Peter Sichrovsky’s fascinating book of interviews with children of Nazis, and a sequel detailing the Jewish journalist’s defection to the right-wing Austrian Freedom Party of Jorg Haider in the mid-‘90s.

“Since then,” Roth said, “everybody has written about [our family history]. It’s really neat that both my parents have books, memoirs about their own experiences, and my sisters have also written drashot and other things.” He navigates the gray area between truth and fiction, saying, “I am borrowing from their experiences in an authentic way, even giving them fictionalized names and creating new situations in the present. That’s the stuff of plays.”

In the Roth family, that’s become a way of dealing with memory and history. Together, Roth sees these three works as a trilogy, though in the risky world of theater production, he suspects few companies would be willing to sign on for the long haul. In 2002 Theater J produced “The Wolf in Peter,” along with its “Born Guilty” prequel, which presage the Glickstein family search. In the meantime, Roth put away his “Andy” play, taking it out years later to revamp it entirely. “It is a different play now,” he admitted. “It is an older son looking back on his family, looking back at the vulnerabilities of his parents, past and present.”

Roth’s investigation and re-imagining of his family’s history, read in conjunction with both his parents’ memoirs provides a unique opportunity to look at memory and how malleable personal histories become when memorializing an event as large and difficult to fathom as the Holocaust. Roth noted, “In our family every one of us shares memory, wrestles with it, and thinks about its meaning and its application to our present lives in different ways.” As for “Andy and the Shadows” and its long and circuitous path to production, Roth concluded: “I’m happy that it took so long. It became a more mature reflection.”