The Religious Art of M.C. Escher 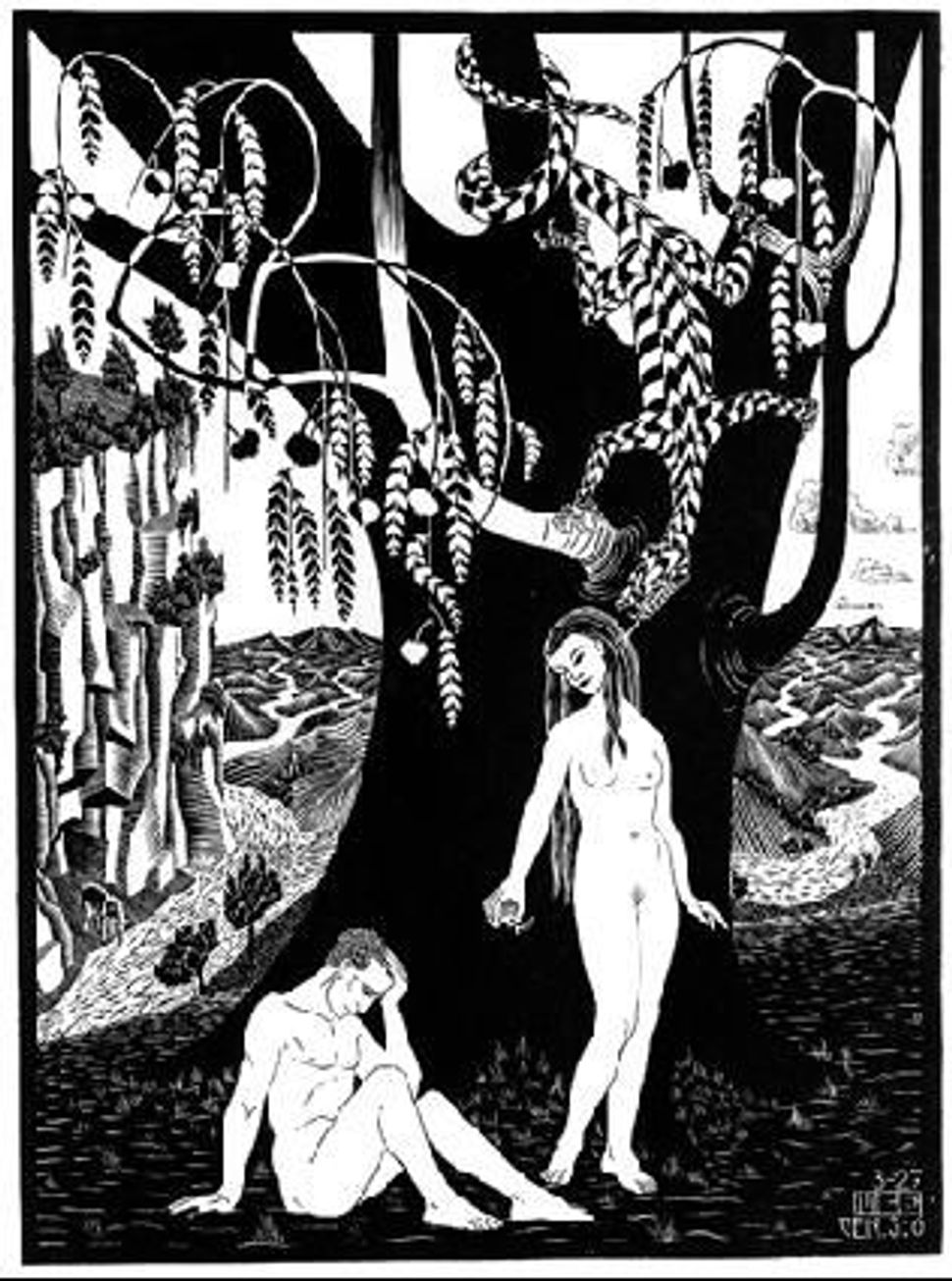 Dutch artist M. C. Escher (1898-1972) is known for his impossible landscapes, like waterfalls and staircases that operate in continuous loops, and his fantastically interlocking “tessellations,” like these dovetailing blue and white birds.

But as viewers ascend the grand staircase in the Escher museum in The Hague and examine the works spanning Escher’s 55-year career, they might be most surprised by some of the Dutch artist and illustrator’s more “realistic” works.

Escher in het Paleis (“Escher in the Palace”), a three-story mansion and the former winter palace of the Netherlands’ Queen Mother Emma, recently celebrated its 10-year anniversary as a museum devoted to Escher. (As full disclosure, the Netherlands Board of Tourism partly supported my trip to Holland, where I visited the museum.) The staircase provides an optical illusion worthy of the artist, who was not only a gifted mathematician but also a skilled draftsman. Although the stairs seem to ascend to the third floor, they only service the ground and first floors; servants had to climb a hidden and much smaller staircase to access their quarters above.

Scanning the works in museum and trolling around on the official Escher website, it immediately becomes clear that Escher created quite a few works that have religious content.

Escher also created an apparently-Buddha-inspired work and seems to have been fascinated by churches, as evidenced by woodcuts such as the “Procession in Crypt” (1927) and “The Drowned Cathedral” (1929), as well as the 1931 lithograph “Cloister near Rocca Imperiale, Calabria.” Two other wood engravings depicted the “Cloister of Monreale Sicily” (1933) and “Inside St Peter’s” (1935).

In 1935, Escher created a lithograph copy after Hieronymus Bosch’s Hell, and as if that was not sufficiently frightening, his 1932 lithograph “Mumified Priests in Gangi, Sicily” is downright unsettling in the manner of Goya’s Black Paintings, or the works of Mexican artist José Guadalupe Posada.

But Micky Piller, the curator at the Escher museum, cautions that several pictures with religious content don’t make Escher a religious artist.

“Escher was always amused when people wrote him, or told him about their interpretations of (some of) his prints,” she said. “He certainly didn’t have any religious connotation to any of his works. The wonderful ‘Adam and Eve’ … is a traditional classical art subject.”

Instead, Piller views the first man and woman in the Garden as one of Escher’s early experiments in symmetry. “Although both sides are different, he carefully chose animals and plants who are shape-wise equal,” she says.

Escher’s churches, meanwhile, “offered him a possibility to test his spatial concept, especially the perspective,” Piller noted, pointing specifically to the artist’s depiction of St. Peter’s in the Vatican. And Escher’s storied visits to the Alhambra — the Islamic palace in Granada, Spain — also weren’t religious pilgrimages, but geometric ones, according to Piller. “In the Alhambra, he found a confirmation of his interest in tessellations,” she said.

World War II found Escher “upset that the Germans took away his teacher Samuel Jessurun de Mesquita, and his family,” according to Piller. “[Escher] offered his Jewish friends, the Wertheim family (whom he knew since his early years in Rome), to have their eldest son in his house together with his own three boys. A younger Wertheim son told me that his elder brother also stayed with the Eschers for some time.”

Since he was not a member of the Kulturkammer — the Nazi Chamber of Culture — Escher could neither sell his works officially nor participate in official exhibits. “He wasn’t — as most of his direct colleagues [were] — involved with the Dutch resistance, but on a personal level he was moved and undertook brave actions,” Piller said.

The Religious Art of M.C. Escher