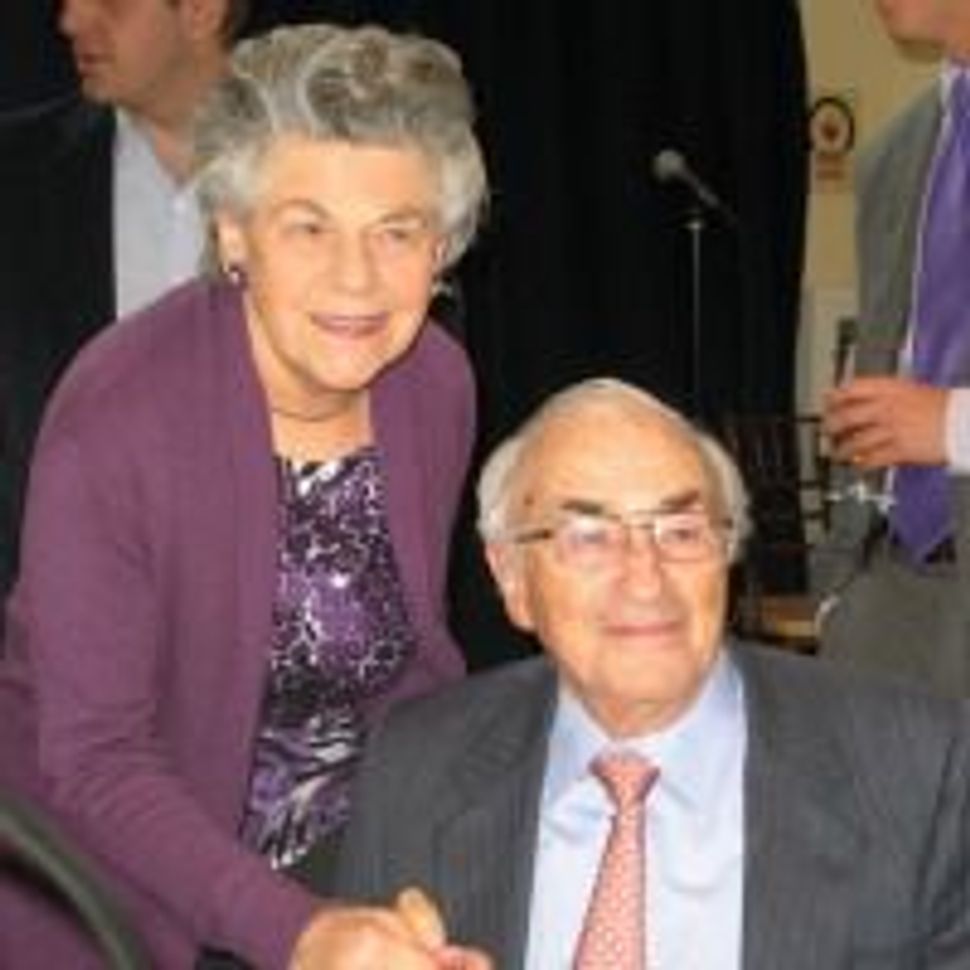 “I’m happy to be here. I am the only person to have been on staff for 67 years and it is not over yet!” declared 90-year old Ernest ‘Ernie’ Michel, Executive Vice President Emeritus UJA-Federation of New York, at the UJA-Federation April 29 benefit held at Lincoln Center’s Avery Fisher Hall.

Michel, who bears the indelible Auschwitz tattoo 104995 on his arm said, “In 1947 I joined UJA…. the UN had declared the separation of Israel and Palestine…and I realized I was involved in Jewish history. I was told I was saved for a reason.” The double-header event which included a stunning, wrenching performance of the two-hour long “Defiant Requiem: Verdi at Terezin” was chaired by William Ackman, Patti Askwith Kenner and Carol Levin.

Created and conducted by Maestro Murry Sidlin with a 137-strong chorus and 75-member orchestra plus piano, the performance replicated the concerts of the Verdi Requiem, which in 1943-1944 had been performed 16 times by 150 Jewish prisoners in Theresienstadt (Terezin) concentration camp in defiance of the Nazis. After the last Terezin performance on June 23, 1944, the doomed members of the chorus were deported to Auschwitz as was conductor Rafael Schechter. Videotaped testimonials by women survivors who had participated in the Terezin performances confirmed its spirit-lifting impact. One survivor — humming one of the phrases — declared, “art can give hope to the hopeless.”

During the pre-concert dinner reception, Ackman thanked honorary chair Stuart Eizenstat, Chair of the Board, The Defiant Requiem Foundation, who informed that, “every nickel raised went straight to the 73,000 Holocaust survivors in the [eight county area of] New York—the largest assemblage of survivors.” Carol Levin vowed to “never forget the victims of the Holocaust…to never abandon them.”

UJA-Federation Executive Vice-President & CEO John Ruskay said, “We are here to do what we can for the survivors in our community,” 230 of whom were bussed in for the concert. During the reception, Cantor Joseph Malovany informed that he chose to sing Psalms 117 and 118 “in honor of — and thanks to God — for giving us Ernie Michel.” I sat next to 103-year-old journalist and author Ruth Gruber who, in 1944, escorted 1000 refugees to Oswego, New York.

At concert’s end, there was total silence as members of the chorus descended from the stage, then walked up the hall’s aisles singing a capella “Oseh Shalom,” leaving many in the multi-generational audience teary-eyed. The evening’s honorary chairs included Elie Wiesel and Madeleine Albright.