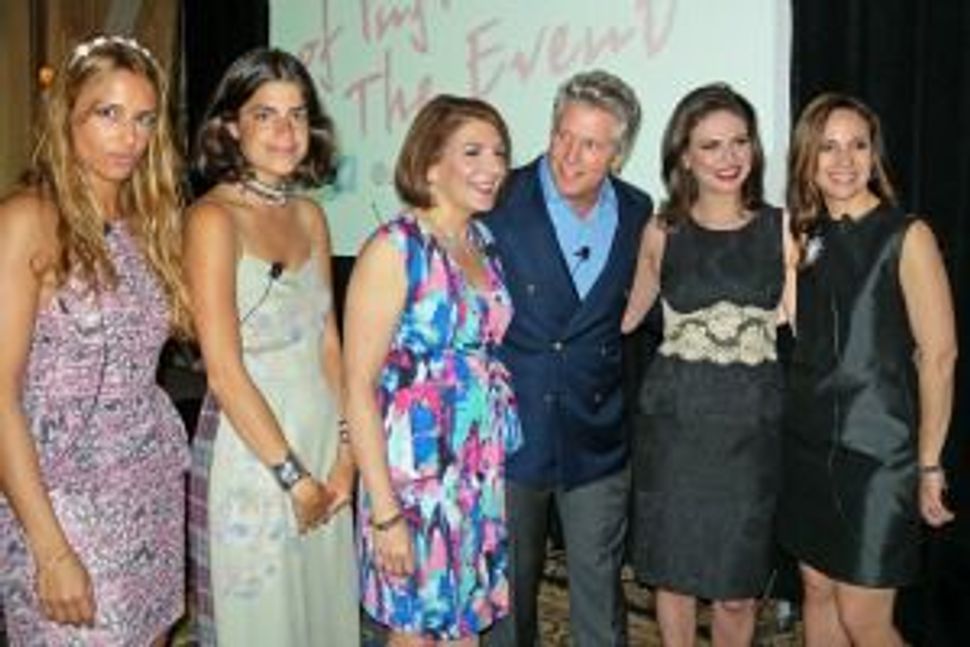 It was chic, short and sleeveless at the “Women of Influence: The Event” reception at New York’s JW Marriott Essex House on May 7.

Following welcoming remarks by Jennifer Gross, chair, Women’s Executive Circle UJA-Federation of New York, emcee Bianna Golodryga, co-anchor, Good Morning America ABC News Correspondent, told the 250 guests: “As Jewish women, we lead by example…and it’s personal.” Thirty-three years ago her parents fled with her from the Soviet Union to Galveston, Texas. “They never let me forget who I was and where I came from.”

Tweaking the conversation with finesse and seychl (Yiddish for smarts), Deutsch’s queries and tidbits of male insight added edge to the dialogue. “Why [are] no women under 35 in the corporate top rung?” he asked. Ronson replied: “I feel I am lucky. I don’t work in corporate America. I lived and created in my own bubble.” Fuller answered, “American corporations need to do more to support women… The female brain is just as intelligent as the male.” Drell-Szyfer’s observation was that “just because a woman works hard and stays late in her cubicle does not mean she will get noticed. You still have to ask for it. It’s a hard thing to learn.”

As for choosing a mate, Deutsch — who admitted “Ninety-five percent of the people who work for me are women” — posited: ”What kind of guy would you want? You have to factor in the choice of spouse — willing to sacrifice more…[women] need to be with men who are more flexible.” Responding to Deutsch’s assertion, “I’m a big believer in risk, ” Drell-Szyfer said. “When I left my ‘dream job,’ the reaction was ‘[what!] to sell mud!!’” She laughed, “But it was my mud.”

Ronson said, “Any mistake couldn’t break me. —the greater the risk, the greater the reward.” A propos Deutsch’s query of which three people each admired most, Drell-Szyfer said, “Woody Allen,” Pablo Picasso, and Peggy Guggenheim.” Fuller said “Golda Meir, “Hillary Clinton” and my husband.” Ronson’s picks were: “Coco Chanel, “Fran Leibowitz”— because she is my neighbor — and my mom.” Medine said: “My father told me that being smart isn’t how much you know, but surrounding yourself with smart people.”

“If you had to address a 13-year old girl, what would you tell her? “asked Deutsch. “You have to believe in yourself,” said Drell-Szyfer. Fuller concurred, “Absolutely. Pursue your dreams.” Medine’s advice was “Listen to your mom,” and Ronson’s non-negotiable bottom line was “Find something you love to do.”