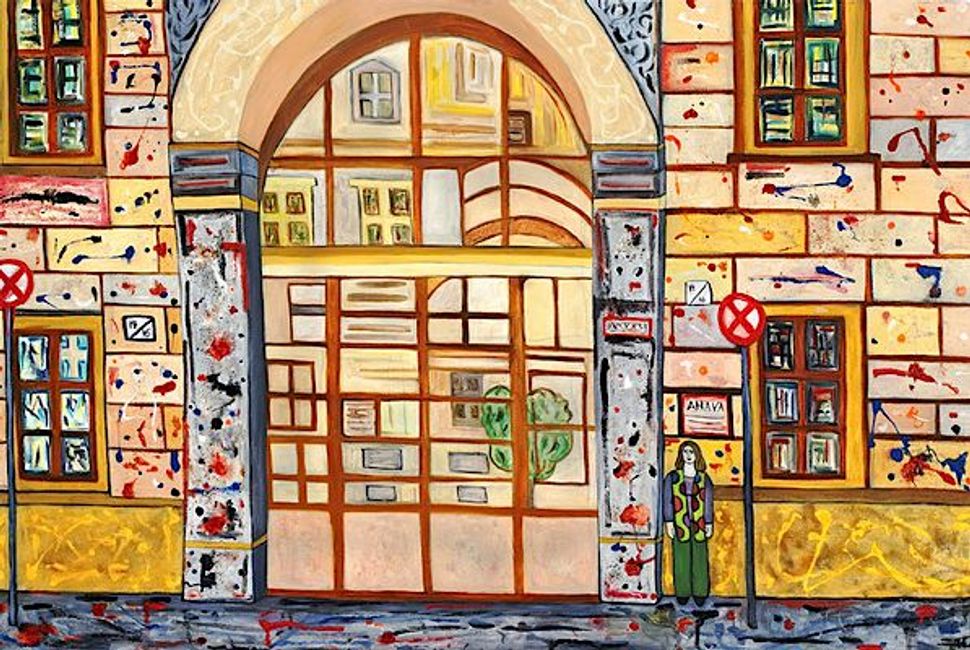 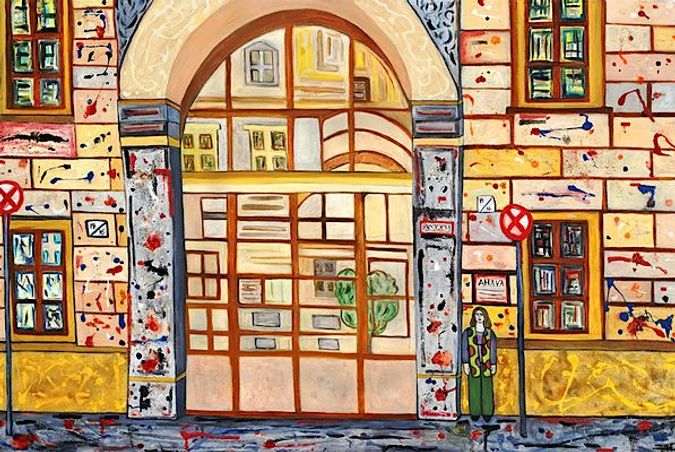 In the painting Bee stands in front of the Berlin Jewish Kinderheim (orphanage) where her mother lived from 1927 through 1934, before heading to Palestine. Both of Bee’s parents were from Berlin, and landed in Palestine as teenagers. The scarred walls of the old Kinderheim seem to reflect the scars inflicted by such a childhood, and the importance of this mother-daughter relationship as a source of Bee’s creative vision.

Much of Bee’s work is about relationships. Carl Jung wrote that the world of women is the world of relationship, what he called Eros, a great binder or psychic relatedness. Jung defined Eros as the connecting principle that fueled human relationships, as opposed to Freud, who thought of Eros as a sexual principle. In our politically correct world, the value of women as the carriers of relationships has been sadly dismissed.

Susan Bee is a brilliant writer — she founded the M/E/A/N/I/N/G anthology — along with Mira Schor, but also a psychologist of the painterly realm. Bee explores the spaces between the people as well as their psychic interiority. She paints her subject’s fixed gazes like deer in the headlights. Many of the couples in her paintings, whether of the same sex or the opposite sex, seem to come from film noir stills.

“I am creating these paintings as spaces for a drama to take place,” Bee recently told Artslant. “The figures are actors and actresses in a stage that I am setting up for them to play out their roles.”

The real nature of the relationships in Bee’s paintings seems to exist in the space around the figures. Much has been written in modern psychology about the interactive field, and field dynamics. Bee paints the dynamism of the interactive field and we see the energetic component in bold relief. The space around the figures is often applied with thick paint that does not resemble the paint handling used to create the figures. Bee’s application captures a palpable energy. This critic can think of no other artist who paints the way Bee does. It is well worth a trip to the gallery to experience these works first hand — reproductions do not capture their energy.

Again the near the door of the gallery there is a small work titled “Death in Venice,” from 2011. The painting shows a funeral gondola floating in a canal with an angel overhead. The work is a tribute to Emma Bee Bernstein, Bee’s daughter, who died several years ago in Venice. Bee’s dreamlike picture references the spirituality of Chagall, while tying a haunting umbilical cord back to “Ahava Kinderheim.” Bee, a master psychologist as well as painter, captures all of the complexity of these relationships, and we are haunted by her work.