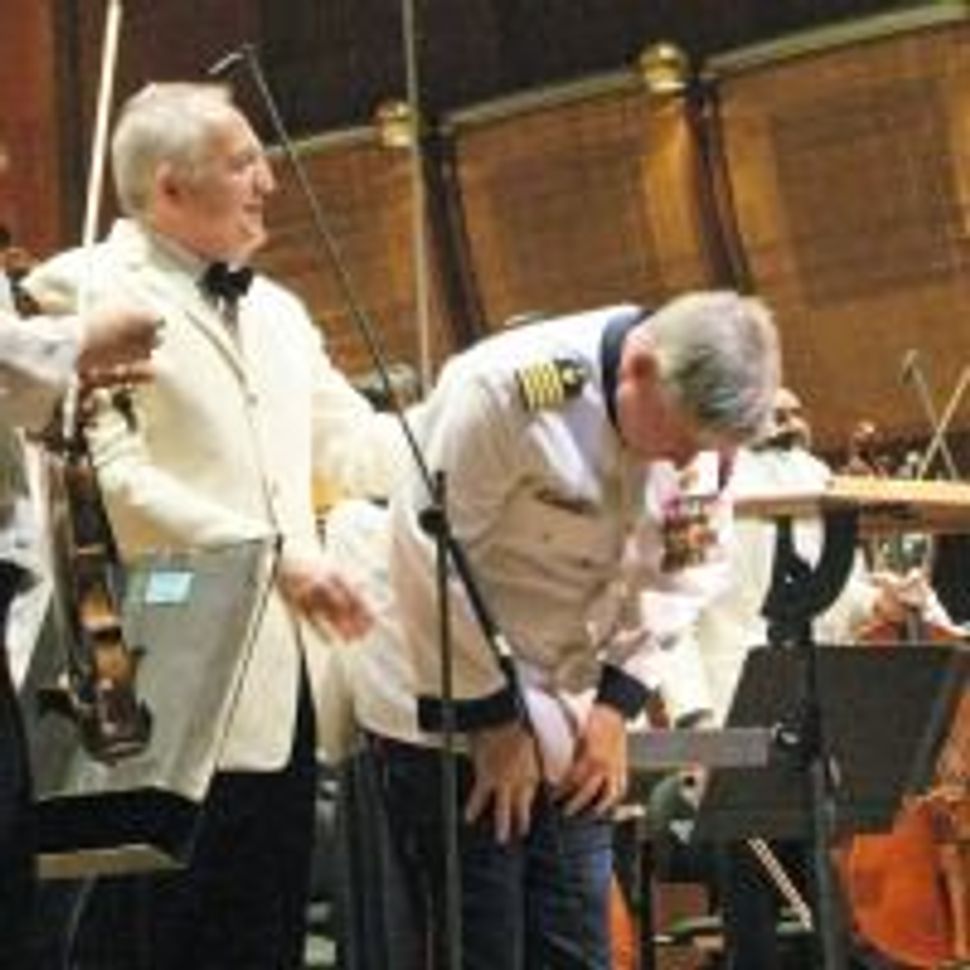 Musical fireworks lit up Avery Fisher Hall on July 4th when the New York Philharmonic led by British-born conductor Bramwell Tovey and the U.S. Coast Guard Band, under the baton of Capt. Kenneth Megan, launched the NYP’s annual Star Spangled Celebration with a heart-thumping rendition of “The Star Spangled Banner” which literally and figuratively thrilled both sides of the aisles.

“Why is this man with this accent standing here?” Tovey asked before explaining:” I’ve been sent by the British government to apologize. I feel terrible about the 1776 event — a ghastly mistake! Thrilled to be here among friends and allies.” The audience roared.

In his commentary on Aaron Copland’s (1900-90) “Four Dance Episodes” from “Rodeo” (1942/43), Tovey cautioned: “Rodeo’s Hoe-Down climax with its unexpected silence may scar you for life. [Yet]“ he conspiratorially confided, “it is a piece that saves you hours of therapy.” Commenting on his own composition, “The Lincoln Tunnel Cabaret for Trombone and Orchestra,” Tovey, with gusto, explained that it was “inspired by a tunnel traffic jam with everyone stuck behind you!” With its echoes of the 1940’s Big Bands, the orchestral work — which had its world premiere in 2013 — offered a showcase for the extraordinary Joseph Alessi, New York Philharmonic’s Principal Trombonist.

Capt. Megan led the white jacket-blue slacks/skirt clad U.S. Coast Guard Band in John Philip Sousa’s (1854-1932) “The Glory of the Yankee Navy “ and Leonard Bernstein’s (1918-1990) “Candide Suite” selections: “The Best of All Possible Worlds,” “Glitter and Be Gay,” and “Auto-Da-Fe (a/k/a/”What a Wonderful Day”) — a tongue-in-cheek allusion to The Inquisition.

The full orchestra and band joined in a medley of Service Anthems as Tovey asked veterans of America’s recent wars “to stand as their service’s anthem — Army, Navy, Air Force Marines and Coast Guard — was played.” As frail and elderly, middle-aged and a few young men and women stood up for their military branch’s anthem, the entire audience cheered and applauded, with some waving small American flags.

“If you haven’t heard them, you must have been living under a rock,” Tovey prefaced the joint orchestras’ performance of “A Medley of Sousa Marches.” He noted that Sousa’s (1893) “The Liberty Bell” march had [in the early 1970’s] been the theme for the BBC comedy series “Monty Python’s Flying Circus.” At the concert’s end, as the orchestras’ members stood at the ready for Sousa’s (1896) “Stars & Stripes Forever “ Tovey’s parting words were: “This is considered the greatest march ever written…What a great day this is! How much the world owes to America.”

As I joined the crowd up the aisle toward the exit door, a woman tapped me on the shoulder and asked me “Are you an American?” I told her, “Yes.” Where was I from, she asked. I gave her a capsule overview of what had been a long odyssey. “ Me, too.” she smiled. “I come from Cuba. I left Communism to come here. God bless America.”