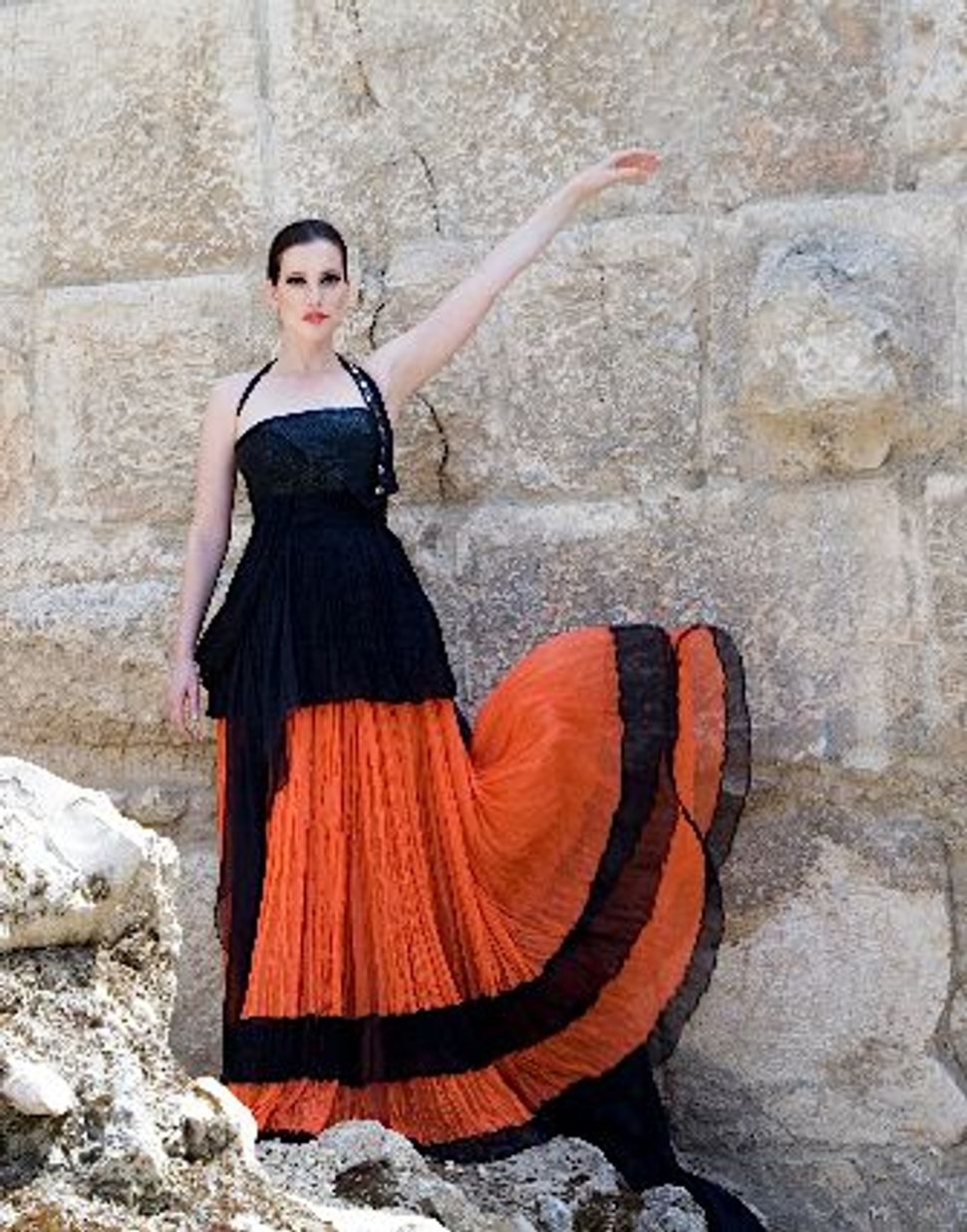 It’s a striking experience to enter a hall dating to the Crusader period deep in the bowels of the Tower of David in the Old City of Jerusalem, and to encounter mannequins draped in haute couture by some of the Israel’s top contemporary fashion designers.

This is exactly the effect desired by new museum director Eilat Lieber and the exhibition’s curator, fashion photographer Tamar Karavan. “It’s a groundbreaking exhibition for this museum,” said Tower of David spokeswoman Caroline Shapiro, about the institution, which is known more for its archeologically excavated layers of the Holy City than for layers of fabric draped over models.

“Threads,” as the exhibition is titled, invites visitors to “experience contemporary fashion embroidered by history.” On view are exquisite garments created by 10 of Israel’s leading fashion designers — all women — inspired by 10 remarkable women from Jerusalem’s past. It’s a fashion show and feminist history lesson all rolled in to one.

“The brief to the designers was, ‘This historical character walks into your studio — dress her,’” explained Shapiro. “That’s it. The designer did not have to be historically accurate in any way, or even be historically inspired. She was free to interpret the woman in any way she wished.”

The result are stunning creations displayed on faceless black mannequins, and also in large photographs, in which the clothes are modeled by 10 female celebrities including writers, actresses, dancers and models. Karavan, who did the photography, had the women pose in Jerusalem locations related to the lives of the historical figures. The show would not be complete without these photographs, which provide a rich visual context that elevates the historical and biographical information presented on text panels next to the mannequins.

Actress Einat Erlich stands at the foot of the stairway inside the Ben Yehuda residence on Ein Gedi Street. She channels Hemda Ben Yehuda, the second wife of Eliezer Ben Yehuda, the father of modern Hebrew, in an ensemble designed by Rachel Cohen. Erlich wears a long white dress with a front panel with a relief print with words Ben Yehuda invented for everyday use. The lace detailing at the cuffs and collar, along with an open black overcoat, transports the viewer to the late Victorian era. Notably, Hemda Ben Yehuda, who was a pioneer of Hebrew journalism and an activist for women’s rights, coined the Hebrew word for fashion, ofna.

Actress Dana Igvy cuts a sexy yet strong figure in a black crocheted and fringed vest with intricate multi-textured detailing inspired by Melisende, Queen of Jerusalem, and designed by Aluma. Daughter of Baldwin II, King of Jerusalem, Melisende was the first native-born ruler of the Crusader period and is remembered for establishing convents and churches in the city and for being a patron of the arts.

One could almost mistake writer Zeruya Shalev for 20th-century poet, playwright and painter Else Lasker-Schüler as she poses on a pathway in Jerusalem’s Rehavia neighborhood in a creation by Hagar Alembik. Shalev wears a richly embroidered blue, brown and gold robe directly inspired by the Indian fakir or Eastern prince costumes Lasker-Schüler would wear as she presided over literary salons.

The other historical figures represented are Roxelana (wife of Suleiman the Magnificent), Queen Helene (Queen of Adiabene in the Pathian Empire who reached Jerusalem in 30 CE and embraced Judaism), the biblical Queen of Sheba, the Empress Helena (consort of the Roman emperor Constantius Chlorus and mother of Constantine the Great), Rachel Yanait Ben-Zvi (a leading labor Zionist and wife of Israel’s second president), and Salome Alexandra (a Hasmonean queen who brought peace to the land).

There is also one fictional character in the group — Shira, the eponymous heroine of S.Y. Agnon’s novel. The heroine, a nurse, is portrayed by model Mirjam Roth wearing nothing but a sheer teddy with men’s tailoring details, designed by Anya Fleet in response to the femininity hidden under Shira’s tough exterior manner.

These are all women who made enduring impressions on Jerusalem. “Their names are familiar from the street signs, but people don’t know them, their stories,” noted Shapiro. “Threads” cloaks these women in splendor and breathes new life in to them — at the very least while the exhibition continues, through October 4.