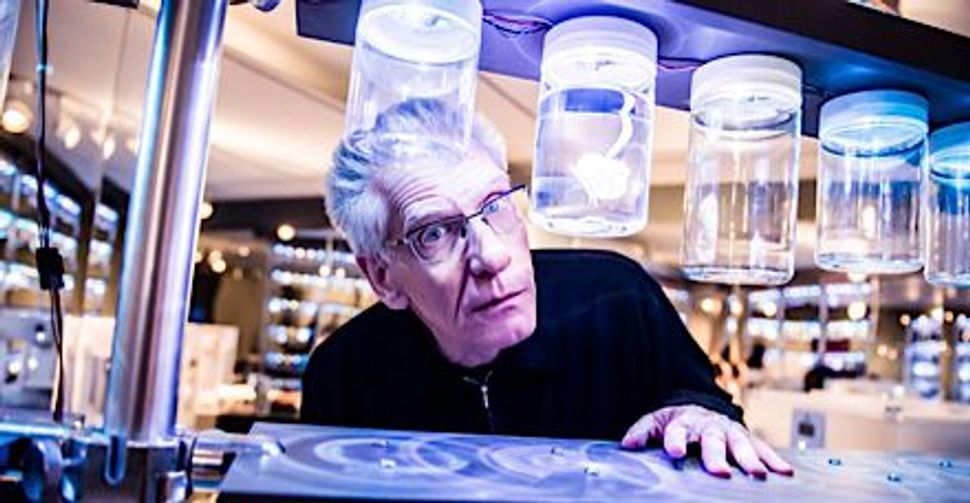 Nearly 50 years since his first student films, David Cronenberg is getting a pair of well-deserved tributes in his hometown of Toronto. For the Jewish-Canadian filmmaker, it’s been an unlikely ascent from genre outlaw to artistic heavyweight. And twinned exhibitions make the case that his intellectual and cultural significance extends far beyond his onscreen output. 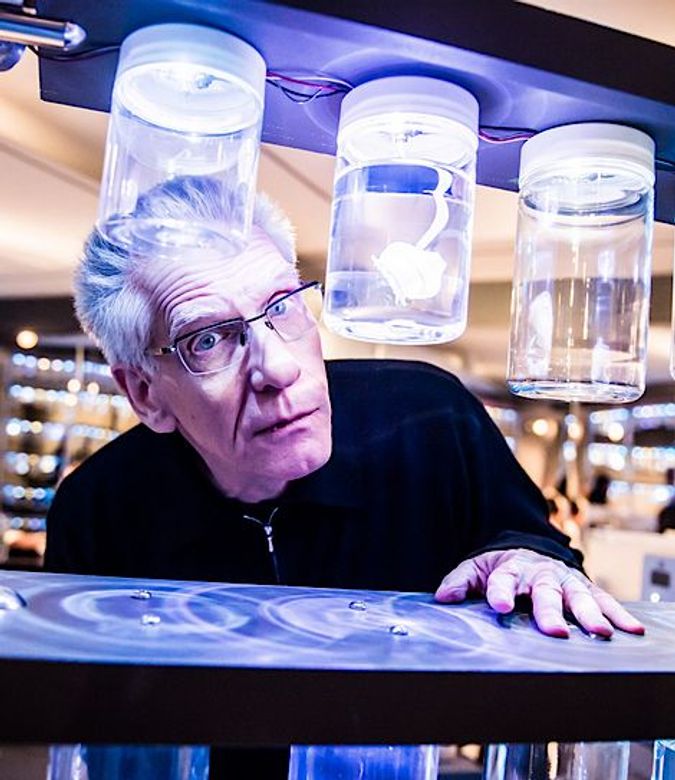 The more elaborate of the two exhibitions, “Evolution,” provides a thrilling look at the Cronenberg’s work and process. The title of this dark, dazzling show — at the Bell Lightbox, home of the Toronto International Film Festival — fits perfectly. Cronenberg has evolved as a major figure in world cinema, from the brainy grad-school filmmaker in the late 1960s who explored pitch-black themes of paranoia and control to the mainstream-movie maker he’s become.

With in-your-face video clips, eloquent wall texts, and props from his films — including the notorious gynaecological tools from “Dead Ringers” (1988) and an actual Mugwump from “Naked Lunch” (1991) — “Evolution” lays out an eloquent case for Cronenberg’s import as an artist and thinker.

It also manages to evoke the high-low thrills of his movies, which ground serious existential musings in razor-edged pulp. Seeing some of the effects and objects from films — like the gristle “guns” from “eXistenZ” — makes you realize all over again how radical some of Cronenberg’s visions have been.

The show also includes screenings of rarely seen shorts like “At the Suicide of the Last Jew in the World in the Last Cinema in the World,” Cronenberg’s 2007 contribution to an anthology commissioned for the 60th anniversary of the Cannes Film Festival. A self-described atheist born into a “progressive, middle-class Jewish family in Toronto,” Cronenberg told an interviewer at the time the film “was provoked by what’s going on in the world right now. The pronouncements of various Islamic leaders about how nice it would be to kill all the Jews in the world… I thought, ‘Well, what if that would happen?’”

Three sections make up “Evolution.” The first, “Who Is My Creator,” tracks Cronenberg’s earliest films, from shorts “Stereo” (1969) and “Crimes of the Future” (1970) to pulpy, popular early feature films of the ‘70s and ‘80s. In most of his early films, scientists who play God unleash primal urges in their subjects, to grotesque effect.

“Who Am I,” the second section, illuminates Cronenberg’s shift to explorations of identity and self in films like “The Fly” (1986) and “Dead Ringers.” And “Who Are We” charts Cronenberg’s recent career; star-driven vehicles like “A History of Violence” (2005) and “Eastern Promises” (2007) continue explorations of humanity and identity, but with a wider world as the backdrop.

Even for non-fans — or non-horror fans, for that matter — the exhibit’s a captivating look at a singular character and his mind-bending way of seeing.

At Toronto’s Museum of Contemporary Canadian Art, one avenue south and several blocks west, Cronenberg’s getting a different kind of shout-out. “Transformation” shares a curator, Noah Cowan, with the TIFF show. He and David Liss, MoCCA’s artistic director, invited six artists to create original works inspired by the master. While referencing Cronenberg’s work — sometimes in highly specific ways — the results, from sculpture installations to video to textual art, stand on their own.

The standout is a surreal video from New York-based artist Marcel Dzama that riffs on Cronenberg’s films and the history of cinema through a warped fairytale. It’s twinned with Dzama’s installation of two naked torsos glimpsed through a broken brick wall. In “Treatment,” Berlin-based Candice Breitz replaces the audio from Cronenberg’s “The Brood” with her own soundtrack; the absurdity only underscores the film’s sense of dread. Seattle artist James Coupe connects a series of cameras to monitors overhead for a 360-degree panorama of the gallery in “Swarm,” It perfectly captures the fluorescent-lit foreboding of Cronenberg’s early films.

The exhibit’s a departure for the museum, Liss told the Forward. “This is the first time that MOCCA has honoured a mainstream filmmaker with this type of exhibition. And the reason why is that I consider Cronenberg to be more than just a ‘mainstream’ filmmaker,” Liss said. “He’s very committed to exploring essential aspects of the human condition through his work — asking challenging and provocative questions about what it means to be human — which are questions that artists ask through their work. Personally I regard Cronenberg as a contemporary film artist.”

“Through the Eye,” the second part of MoCCA’s Cronenberg show, makes for slightly less compelling viewing. A look at “Cronenberg’s influences throughout his storied career,” the section lays out work from Louise Bourgeois, Alex Colville, John Scott, and Andy Warhol. “Cronenberg has drawn significant influence from Modern and contemporary art, as well as from literature, and many contemporary artists have been influenced by Cronenberg,” curator Liss told the Forward.

The point’s well taken, but the section seems redundant in light of what Liss and Cowan accomplish with the original work they’ve gathered for “Transformation.” And Cronenberg’s prophetic work feels like it should inspire a look forward — as the young artists in the show have done — rather than back.