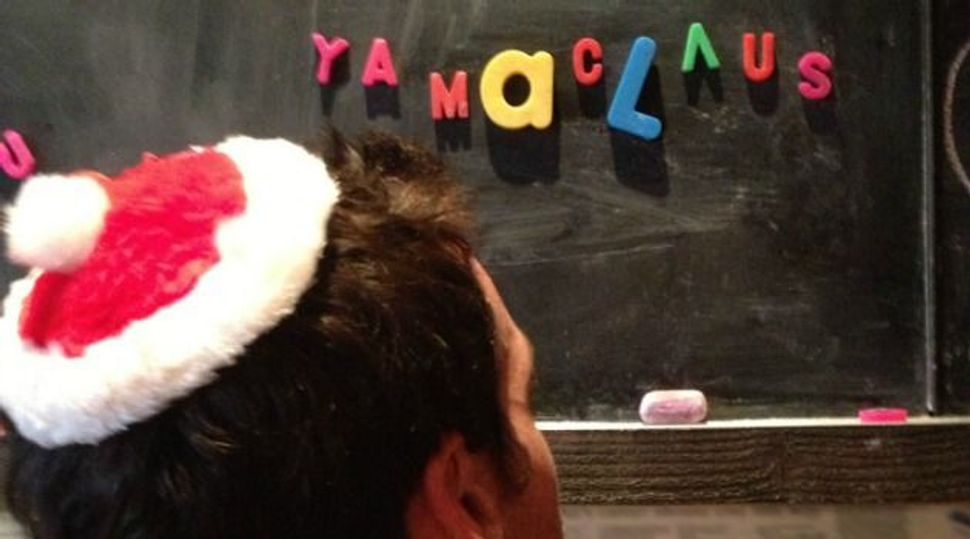 This year, celebrate Christmas the kosher way (sort of), with a Yamaclaus. It’s exactly what it sounds like: a red yarmulke complete with fluffy white Santa trim. And if you’re a millennial, chances are you’ve seen it before.

Fans of “The O.C.” will recognize this holiday gem from the show’s second season Chrismukkah episode, “The Chrismukkah That Almost Wasn’t.” In fact, that’s exactly where Yamaclaus creators Alan Masarsky and Larik Malash, both Russian American Jews, got the idea.

“We’d been talking about it ever since it was on “The O.C.” in 2004,” Masarsky said. (Side note: Has it really been THAT long since we first heard about Chrismukkah!) “We thought it was such a brilliant idea. We’d always been those guys who loved the holidays and went to parties wearing interesting things.”

What started as a joke among friends became reality when the pair took to Kickstarter, where they raised $2,834 — more than $300 over their original goal.

Manufactured in San Diego, the Yamaclaus is targeted towards young, secular adults. “This was not something we were trying to shove down anyone’s throats, especially those wo are traditionally Orthodox.” Masarsky said. “We don’t expect them to be worn at synagogue. This is just a fun accessory and a novelty item that you can wear to events.”

But not all see it as a harmless joke. Masarsky admits that when he first started sending out samples, he got negative feedback from Orthodox areas. “People [were] saying ‘I don’t think this is cool, I would never wear this,’ which we understand. We don’t mean to insult. It’s a unique mashup, [and] one that clearly has religious iconography, but it’s not at all meant to be used in a religious way.”

Criticism aside, Masarsky says that the festive caps have been selling big. Even dogs are wearing them:

The best part? Due to the happy coincidence of Hanukkah and Thanksgiving this year, you don’t even have to feel guilty for abandoning silver and blue for red and white. Get yours here.