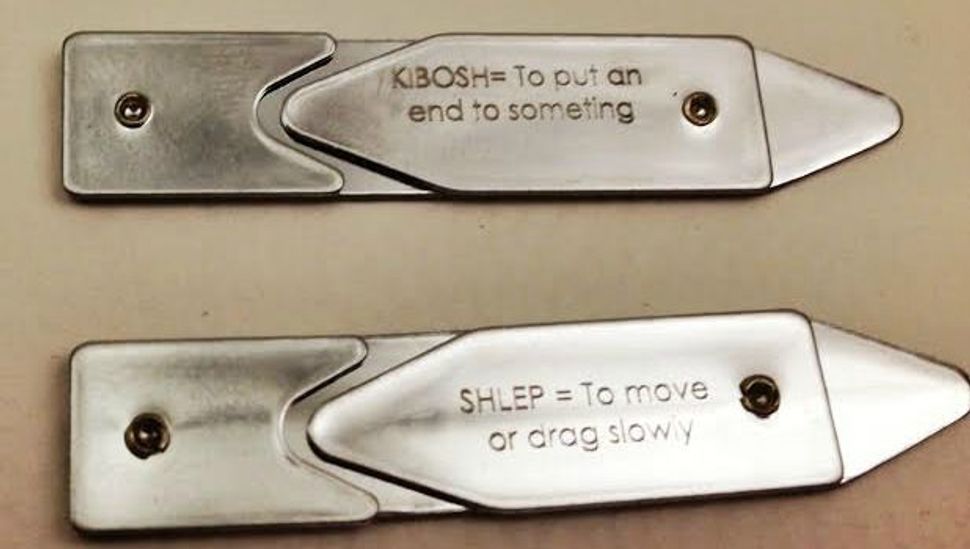 It’s too bad Hanukkah and Christmas don’t coincide this year, because we’ve found the ultimate gift.

Swiss Stays, a company that makes adjustable collar stays for men — yes, those things that come in the inside of your shirt collars — has teamed up with Saks Fifth Avenue to launch a special collection — “Think Yiddish, Dress British.”

The concept? Each stay, or tab, is engraved with a word in Yiddish, with the English translation listed under it. Tuck it into your collar, and voila: You’re Jewish from the inside out.

Company head David Schottenstein came up with this homage to the Jewish roots of the garment industry when talking to the national accessories director for Saks about developing an exclusive line.

A stainless steel pair will set you back $30, while brass and titanium cost $40 and $50, respectively.

The idea for Swiss Stays, Schottenstein explained came from a typical ‘guy problem’:

“I became frustrated that every time I went to put on a collared shirt I had to change the collar stay, and I was spending unnecessary time hunting in my drawer for the right size. I got to the point of cutting the collar stays or bending them in order to fit. I thought to myself, wouldn’t it be great if there were a one size fits all collar stay? They say the best inventions come from necessity.”

Schottenstein’s previous schmatta project was Astor & Black, a custom bespoke clothing business that he started when he was 21 years old. According to him, the only thing that gets in the way of young innovation is lack of confidence:

“People have great ideas all the time but find all the reasons not to do it,” he said in an interview with Inc. “You have to be fearless and do not internalize rejection.”

That’s been no problem for Schottenstein, who started his first business at the age 12. After noticing that businessmen visiting his father — Thomas Schottenstein of Arshot Investment Corp. — had a certain affinity for cigars, he started his own cigar business on the low down. It ran for two years, until daddy found out and shut it down.

Take your pick from the following words next time you need a straight collar: