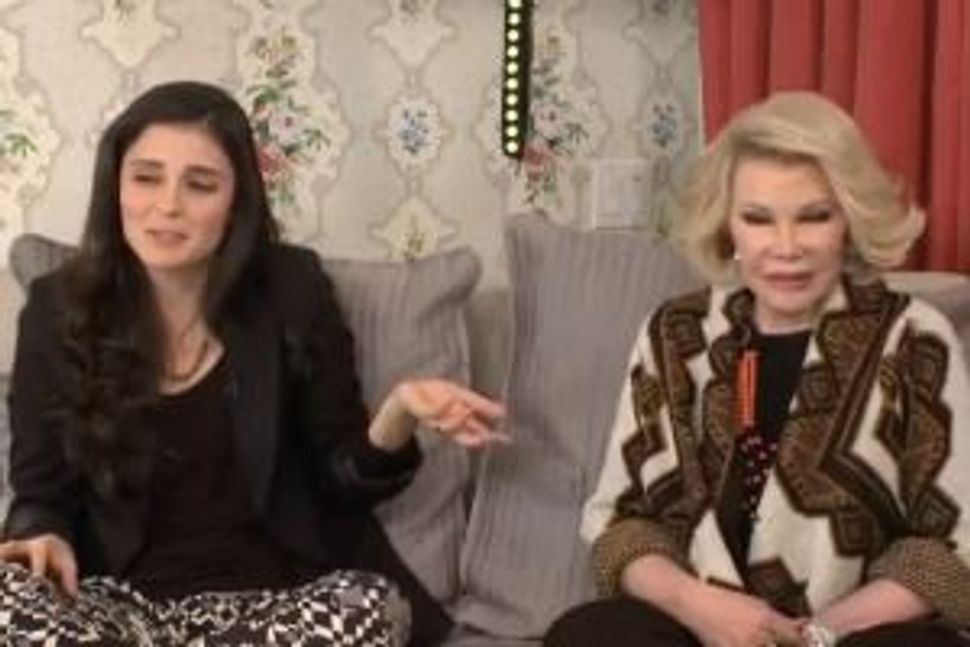 Every week, Joan Rivers has a one night stand with the celebrity of her choice.

We’re talking, obviously, about “In Bed With Joan,” (what did you have in mind?) Rivers’ online talk show which shows her dishing with fellow entertainers between the sheets.

This week, Shiri Appleby (“Roswell,” “Girls,” Chicago Fire”) joined Joan for what we could only hope would be some Jewish girl talk.

Rivers opened the episode by commenting on how confused people must be by the spelling of Appleby’s first name (“So how many people have called you Sherry?”). Somehow, this led to a discussion about the Hebrew meaning of Joan — which according to River, means “whiner” — and Shiri, which means “my song.”

“My parents said I was like the song in their hearts,” Appleby explained. “Until I turned into a teenager.”

As it turns out, Appleby is quite the funny lady. Other gems include:

On not naming her child Ira: “You’re just not going to have sex with Ira Shook.”

On her fiancee: “We’re both Jews. He’s a very cute Jewish cook… One of our first meals, he came over to my house and taught my mom how to make latkes.”

For more on Shiri’s new baby, her Jewish background (her mom is a Hebrew teacher) and what Joan really thinks of Lena Dunham, check out the video below: