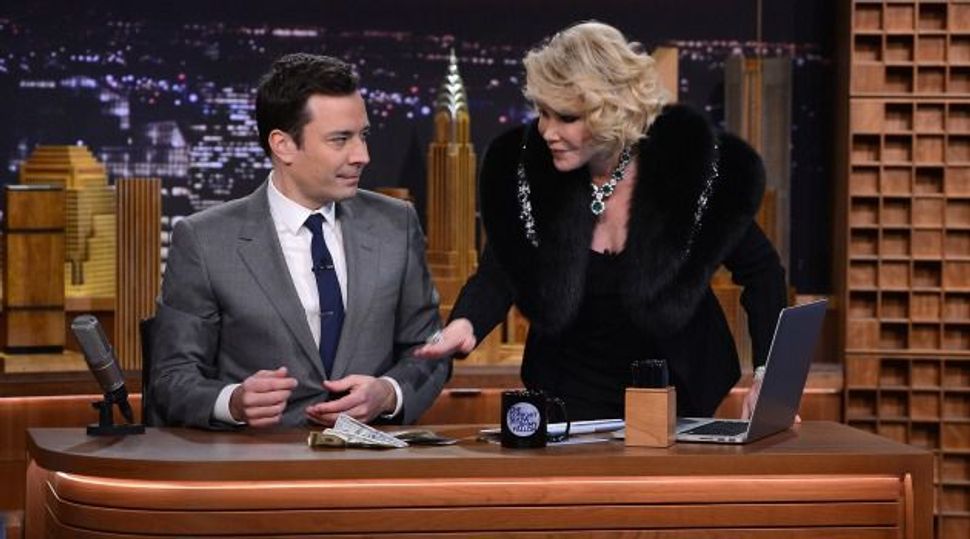 (JTA) — Monday Night marked Jimmy Fallon’s debut as host of “The Tonight Show.” It was also the first time Joan Rivers, among the parade of stars who took the stage to settle a $100 debt, appeared on the show in over 25 years. Even more monumental: It was the 49th anniversary of her first-ever “Tonight Show” appearance, on Feb. 17 1965.

“It’s about time!” Rivers said in a statement of her return, per The Hollywood Reporter. “I’ve been sitting in a taxi outside NBC with the meter running since 1987.”

Rivers was banned from the show by Johnny Carson after leaving her gig as his permanent guest host to helm Fox’s “The Late Show With Joan Rivers,” a competitor.

“Being in the studio brought back the most wonderful, wonderful memories of the night that jump-started my career,” she said. “So when people ask me, ‘Why was last night different from all other nights?’ I’ll tell them that it certainly beats Passover!”

Now THAT is a graduating class! @jimmyfallon @FallonTonight pic.twitter.com/nyYxgJrHmu