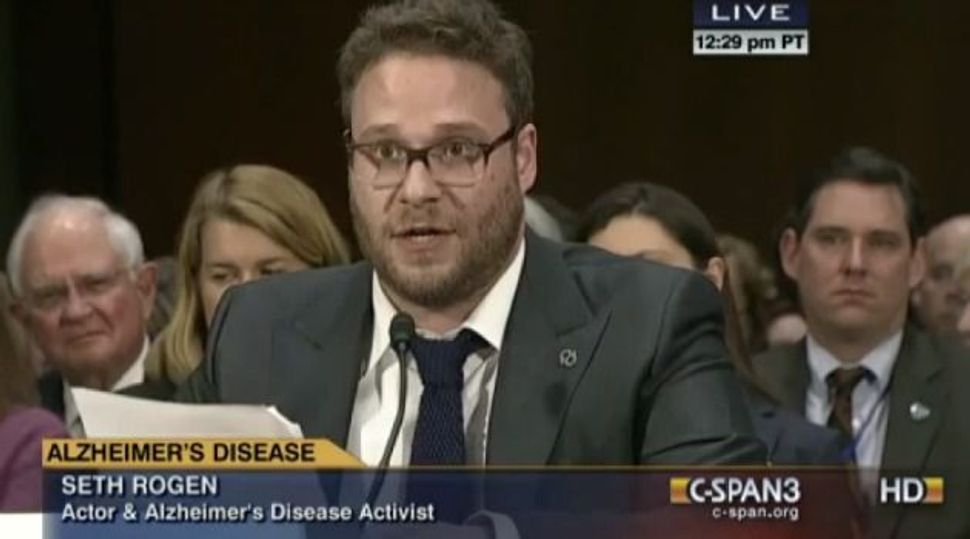 The actor and director is a celebrity spokesman and fundraiser for the National Alzheimer’s Association, a role he took on after his mother-in-law was diagnosed in her 50s.

Rogen began his speech admitting his ignorance about the disease: “My impression of Alzheimer’s was probably what I assume most people’s impression is,” he said. “I thought it was something only like really, really old people got, and I thought the way the disease primarily showed itself was in the form of forgotten keys, wearing mismatched shoes and being asked the same question over and over.”

“After forgetting who she and her loved ones were, my mother-in-law, a teacher for 35 years, then forgot how to speak, feed herself, dress herself and go to the bathroom herself,” he continued. “All by the age of 60.”

Rogen ended the speech on a strong note, calling on the government to do more for those suffering from the debilitating disease. “Americans whisper the word ‘Alzheimer’s’ because their government whispers the word ‘Alzheimer’s,’” he said. “It needs to be yelled and screamed to the point that it finally gets the attention and the funding that it deserves and needs.”

Unfortunately for Rogen, there were very little people present to hear his rallying cry — only a handful of senators were present at the hearing.

Disappointed at the lack of interest for the cause, the actor didn’t pull any punches.

All those empty seats are senators who are not prioritizing Alzheimer’s. Unless more noise is made, it won’t change. pic.twitter.com/xDW6tlMHmH

Not sure why only two senators were at the hearing. Very symbolic of how the Government views Alzheimer’s. Seems to be a low priority.

And our personal favorite:

Thanks to @Sethrogen for speaking out about efforts to #ENDALZ. RT if you know someone affected by #Alzheimers. pic.twitter.com/KTDIxPaMXU

.@SenatorKirk pleasure meeting you. Why did you leave before my speech? Just curious.