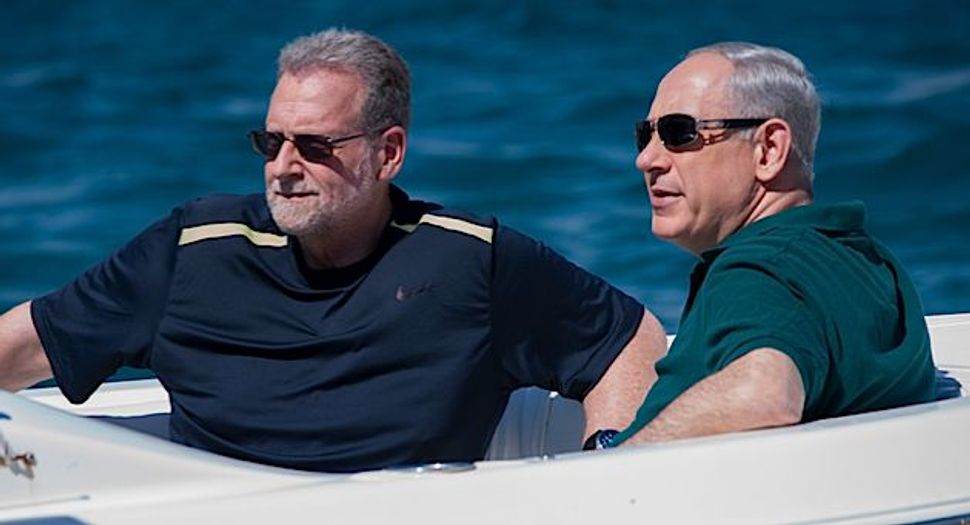 Peter Greenberg has what may be the world’s best job. He is travel editor of CBS News, a post he’s held for the last 13 years. Before that he spent a combined 21 years in the same job at the Today Show and Good Morning America. He also has a syndicated radio show on travel and, for PBS, hosts “Royal Tour” specials, where Greenberg visits a nation with an unusual tour guide — the nation’s leader.

On previous Royal Tours Greenberg, 64, visited Jordan, Mexico, Peru, Jamaica and New Zealand. His latest special, which premiered March 6, was to Israel, where his escort was Benjamin Netanyahu. The Prime Minister proves a gracious host and takes Greenberg and his large crew to a host of traditional tourist sites — the Dead Sea, Masada, Caesarea — as well as providing personal insights about his experiences in the military.

Greenberg spoke to the Forward about his job, the show, and the secrets of a frequent flyer.

Curt Schleier: How much traveling do you do?

Peter Greenberg: I travel almost 400,000 miles a year. Today is the only day this week I’m not an airplane.

Traveling today is a pain. Do you ever get tired of crowded planes and delays and cancelled flights?

It doesn’t get tiring. You have to know the process of travel and know how to navigate. You have to have a Plan B and a Plan C, because Plan A never works.

For example, I carry with me about 40 different airline tickets, all valid, to 20 different destinations. They’re never denied. I have the OAG [Official Airline Guide] in my suitcase. I don’t go to the Internet. I use the print version to figure out the best route to where I’m going. I’m old school that way.

But not every traveler can do that. Do you have advice for the one-vacation-a-year guy, or business travellers?

The whole idea is to beat the airline and cruise line by playing their game. I don’t check bags. I FedEx my bags ahead and save two hours of my flight every time I fly. I don’t obey airport signs. I don’t go to the departure area when I leave. I don’t have bags so I go downstairs to arrivals and go to TSA that way. When I arrive I have a car pick me up in the departure area, because there are too many people waiting for cars in arrivals. And when I get to the hotel, my bags are in my room because I FedExed them.

Do you have a favorite country?

That’s difficult. There are 198 countries in the world and I’ve been to 151 of them. That’s 150 more than most Americans. Only 37% of Americans have passports. I don’t really have a favorite.

What’s on the top of your list of the 47 countries you haven’t visited?

Honestly? All of them. [Then pressed for an answer:] One country I’d like to visit is Azerbaijan. I’d also like to visit the Gilbert Islands, Guadalcanal in the Solomons and the island nations of the South Pacific.

Are there places you never want to go back to?

I’ve been in a shootout in Nairobi, Kenya, in war zones all over the place, in parts of Sudan and Somalia I wouldn’t recommend. I’m not on holiday. I’m working.

Where do you go on vacation?

Last year, for the first time in 12 years, I took seven days off and went to the Maldives in the Indian Ocean. I brought DVDs of “House of Cards,” the books I wanted to read and just chilled out hoping nothing happened in the world. And nothing did.

Had you been to Israel before?

Forty times, going back to 1970. I covered a couple of wars there and covered the entire region.

Did you know the Prime Minister before this trip?

Yes, I met him in New York when he was Israel’s ambassador to the U.N.

Was filming in Israel in any way special to you?

It’s interesting. You have a certain cavalier attitude going in, but when you get there all of a sudden it hits you. You realize it’s impossible to go 20 steps without being confronted by history. You realize you can’t go just once; you have to keep going.

Did it seem special to you as a Jew?

For me, honestly, you’re shooting 20 hours a day going at full speed, it’s significance hits you after you’re gone.

What is your Jewish background? Were you a bar mitzvah?

I wasn’t a bar mitzvah. I wasn’t given any formal religious training. Of course, I attended a lot of bar mitzvahs, but I also attended a huge number of confirmations and christenings. It made me respectful of all religions.

You asked the PM several interesting political questions. Was there anything off limits?

These are very difficult projects to produce, given the nature of asking the head of state to give you six days, making sure they get no right of review and have no editorial control. The first time he sees it will be at its premiere.

You had a particularly difficult shoot this time. Netanyahu was showing off his soccer skills and damaged a ligament. He was put in a cast. You had to suspend production and return a couple of months later. I’m wondering if there was any blowback from Israelis about their leader spending so much time on this project?

Not that I’m aware of, for the simple reason they understood it wasn’t about him. He was the tour guide showing Israel through his eyes to people who’d never seen Israel through their own.