A Jew at Buckingham Palace 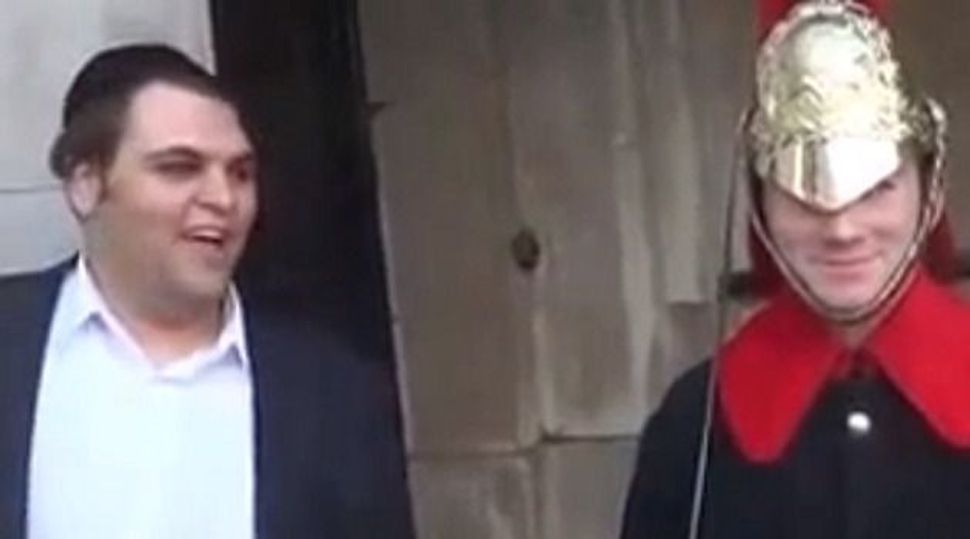 (JTA) — They are trained to uphold the strictest protocol, which includes standing motionless and expressionless at attention outside Buckingham Palace in London.

But that training was no match for an American Jewish tourist who made a Royal Guard soldier crack up, and then captured it on film.

The video documenting the man identified as Yankel’s feat surfaced recently online, and though attempts to reach Yankel and ascertain his identity and the date of filming have not immediately succeeded, the film pretty much speaks for itself. Yankel, who appears, judging by his black kippah, black suit, tzitzit and white shirt, to be Orthodox, begins his offensive on British decorum by standing next to the soldier and telling his friends’ camera: “We were together in school, me and him. He went his own way.”

The soldier remains frozen as Yankel elaborates on their 30-year-long friendship, which he says has endured despite some basic differences of character. “I remember in school, he used to sit by himself and read books. I was just this guy fooling around and having fun,” Yankel says. The soldier begins to crack 60 seconds into Yankel’s routine, when Yankel recalls how the soldier’s mother would pick him up from school until he was 20.

When the soldier finally shows a grin, Yankel loses himself in euphoria, complete with spontaneous screaming. Then he gives a Hasidic victory dance with his three friends, also in Orthodox garb, as they walk away.

The reaction on YouTube has not been entirely positive.

Aryeh Kalman, an apparent Member of the Tribe from London, was not immediately amused. “As an Englishman, my first reaction was utter embarrassment for such a chilul hashem [sacrilege] as these soldiers put their lives on the line for our country,” he wrote in the video’s comment section. “Just like Americans respect their soldiers so too do [we] English [respect] our soldiers.”

That said, Kalman wasn’t entirely unappreciative, acknowledging that “it was hilarious ultimately.”

A Jew at Buckingham Palace