Fran Drescher Is More Than ‘The Nanny’ 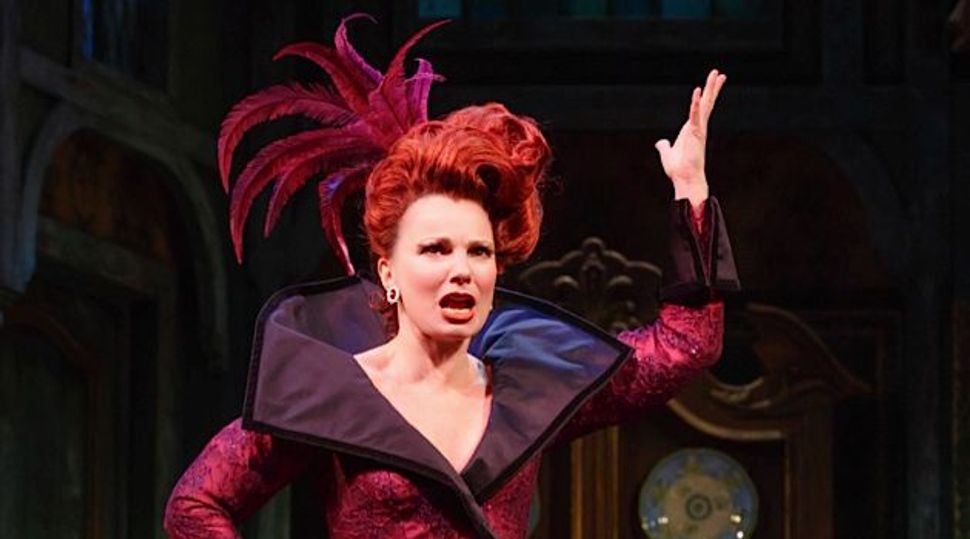 An idiosyncrasy of the cavernous Broadway Theater in Manhattan — currently home to the hit show “Cinderella” — is that actors need to traverse the stage to get from their dressing rooms to the stage door. So it’s where I wait for Fran Drescher, who has very successfully traversed from lovable Jewish nanny to evil step mom.

But when she appears, it’s more like the fairy godmother — or at least someone with magical powers. Though it’s been 15 years since the finale of her hit TV sitcom, “The Nanny,” the 56-year-old actress hasn’t seemed to age a bit. And that’s not all that hasn’t changed.

There is, of course, the familiar voice, one the adjective nasal only begins to describe. No, she says, in response to a question, she is not comfortable “playing a character that you love to hate. I love playing characters you love to love.”

So the first time she ripped a fancy gown from Cinderella (Carly Rae Jepsen), she actually apologized to the young singer. Recalling that moment, Drescher laughs. That laugh. The laugh once called “the sound of a Buick with an empty gas tank cold cranking on a winter morning.”

Several days later on the phone, she continues the thread of that conversation, speaking also about how she got to Broadway and the perils of her very public life.

Curt Schleier: Did you really apologize to Carly Rae after the scene?

Fran Drescher: It really was hard for me to be so mean and afterwards I felt that it was so harsh I wanted to say to her, “I’m not really bad.” Since then [doing that scene] has gotten easier and I don’t feel people are mad at me because my character does things that are despicable.

How did you come to this role?

My [most recent] television series, “Happily Divorced,” did not get a pick up after 34 episodes so I found myself available for the first time in many years. When the offer came in, I was going to be in New York so I went to see the show. I saw [it on television] growing up, and I thought if it’s as good as I remember, I have to have the experience.

What was your reaction?

I told them I thought it was wonderful and I think I can make the role my own. I wanted to reinvent the character. Make her much more glamorous, not just a mean old biddy. They redesigned the costume. The old one wasn’t what the paying audience coming to see the show with me in it wanted. I’m known for my clothes, my hair and dresses. They accommodated me, so here I am. Ticket sales have increased, [thanks to] Carly Rae, too. We get along great and love working with each other. It’s been an amazing experience I’m really cherishing.

Is there anything that surprised you about the experience?

I didn’t expect theater people to be so much into rituals. They do a lot of things that are repetitive, almost OCD behavior. There’s a lot of superstition. For example, we wait in the wings to walk out for the big ball, and two of the girls always rub the necklace of Sebastian, the lord protector. I don’t know how that started, but they have to rub it. When anyone leaves the company, everyone sings “Happy Trails” to them. At the end of a performance where an understudy has gone on, they form two lines with their hands in the air and make hooting sounds and wiggle their fingers. The understudy has to walk through the arched hands. It’s a sign that the understudy did a good job and has the support of the company. It’s a million things like that.

Your life has pretty much been an open book; two books actually, “Enter Whining” and “Cancer Schmancer.” Your husband (and still business parter and friend) is gay. You battled cancer. You are an outspoken advocate and activist on healthcare and LGBT issues. Do you wish any of that was private?

There was a time when my husband and I first separated when I wasn’t used to the intrusion I experienced and didn’t really understand that there’s an unquenchable desire for news and content in the age of the Internet. You can’t take it personally. People aren’t your friends when they write good things about you and they’re not your enemies when they leverage your tragedies. Now that I’ve had that experience I’m able to anticipate certain things that come with fame and be better prepared for them.

Around the time “The Nanny” premiered, network television wasn’t excited about sitcoms featuring female Jewish leads. I know there were a lot of reservations from some quarters about airing Rhoda. Did you get any blowback?

When we were writing the pilot, the network called us and said P&G would buy the show if we made the Fran character Italian. I learned the hard way that you’ve got to follow your instincts and not try to please people at the expense of your project. If you do and it doesn’t fly you’re going to say, “Why did I listen to them always?” But if you end up not succeeding on your own, you know that at least you did it your way.

You grew up in Queens, N.Y. Was yours an observant family?

I wasn’t a bat mitzvah. Then there were only a few girls that did that and usually they were from families much more religious that we were. I was raised in a highly Reform household. My family stressed the history and the legacy of the Jewish people throughout the ages. We would get together with family and friends on the holidays, but not necessarily do the traditional stuff. It’s more family get togethers where we wish everyone a good yontif and use that as an excuse to get together.

Fran Drescher Is More Than ‘The Nanny’