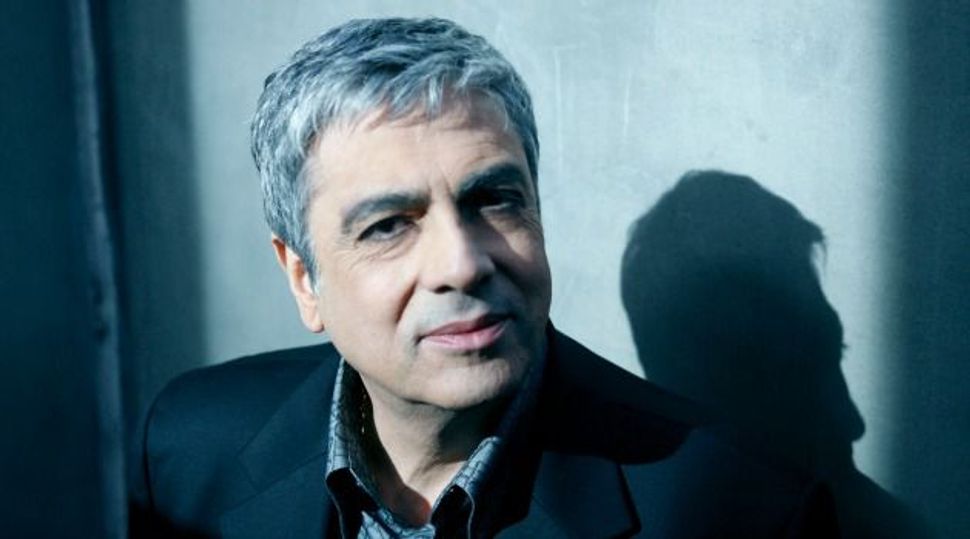 Image by Courtesy of the NY Sephardi Film Festival

If you’ve grown up as a Sephardic Jew, there’s one singer that you’ve reliably heard at every single wedding, bar/bat-mitzvah, engagement party, Shabbat, or celebration of any kind.

His name is Enrico Macias.

Born Gaston Ghrenassia in Constantine — then in French Algeria — in 1938, the Jewish “Pied Noir” singer has come to embody the bittersweet memories and nostalgia felt by Jews who left their Arab homelands in the 1960s and ‘70s.

In other words, you’re not a Jew of North African descent until you’ve seen your grandmother tearing up to “Adieu mon pays,” (“Goodbye My Country”), Macias’s first hit, written from the deck of the boat carrying him and his family away from their war-torn home.

Macias and his wife, Suzy, fled the Algerian War for Independence in 1961 after his father-in-law, Cheikh Raymond Leyris — also a famous musician — was murdered. Macias’s father, Sylvain Ghrenassia, was a violinist in an Andalo-Arabic orchestra.

Since then, he’s become an international superstar of French music, an “Ambassador at Large for Peace and Protection of the Children of the World” (named by former U.N. Secretary General Kofi Annan in 1997), and most recently, a successful comedy actor.

The Forward’s Anne Cohen sat down with Macias at the Gansevoort Hotel in New York City to talk about his upcoming move to Israel, his new movie career and, of course, his favorite songs.

This interview has been translated from French.

Anne Cohen: A movie about your life premiered at the 17th Annual New York Sephardic Film Festival. You also star in “Would I Lie To You 3”, which will close the festival on March 20. How do you like acting?

I think a new, younger audience has joined my traditional fans – and when I saw traditional fans, they also span a couple of generations. It’s great. Young people see me in movies and say “Oh, he’s also a singer, I’m going to listen to his songs.” And that’s how they discover my work.

How did you come to participate in this year’s festival?

It was a huge surprise. I was honored when I received the letter. For me, it’s almost a bigger reward than the movie’s success. To be recognized by one’s family, by a Sephardic association… Because, you know, in the United States, Ashkenazi Jews are very powerful. So it’s great for Sephardim to stand up in this way and to share our culture with others.

Tell me about your Jewish background. Were your parents religious?

The Jews of Constantine were very, very religious. We had some very respected rabbis who left us their writings. In my family, we had a rabbi named Rabbi Yosef Ghrenassia — he’s now buried in Dimona, in Israel. I used to go to his synagogue all the time. Judaism was very present in Constantine. We were the biggest Jewish community in Algeria and maybe even North Africa.

You recently announced that you would make aliyah to Israel after having lived in Paris for more than 50 years. Why are you leaving France?

Within a year, I plan on moving to Israel. I’ve believed for a long time that it’s the final destination for all Jews, especially with the rise in anti-Semitism. I think it’s important to make the decision to move to Israel and not wait to be forced to leave. My love for Israel is sincere — I don’t consider Israel as protection measure, for me, it’s an ideal.

In the United States we’ve been hearing a lot about the rise of anti-Semitism in Europe. Does it worry you?

I don’t kid myself. Anti-Semitism hasn’t disappeared since World War II. It has existed for a long time and just because there are periods of calm, doesn’t mean it isn’t present.

During an interview with Israel’s i24 last month, you mentioned that you will continue the fight against anti-Semitism as long as you live. What is your first memory of anti-Semitism?

I came across anti-Semitism in France but not in Algeria. In Algeria, people lived together in friendship and solidarity. No one ever called me a “dirty Jew,” if you will. But in France it was different. When I was studying at Fontainebleau, young people would say things like “I don’t like Arabs.” — They thought I was Arab, you see. And so I would say “I’m not Arab, I’m Jewish.” They responded with things like “There’s no lower race than Jews.” So I would get into fights, and I would get in trouble.

You haven’t been able to return to Algeria since you left in 1961. Do you consider yourself an Algerian singer? A Jewish singer? A French singer? Does your music have an identity?

You know, I’m Jewish first. But I’m also a universalist. To me, borders hinder spiritual growth and enflame existing hatreds. Don’t forget that I’m the author and composer of “Enfants de tout pays.” (Children of all countries). I dream that one day children of all countries will live as brothers. Unfortunately, that’s not yet the case.

So yes, I consider myself an ambassador of French song, a representative of Algerian culture. An Algerian singer, a French singer and a soon-to-be Israeli singer. I’m a singer of all countries.

You’ve recorded over 100 songs. Do you have a favorite?

I don’t want to give you a lame answer. You know, my songs are like my children, I love them all. But I have a soft spot for the first song I ever wrote, which was “Adieu Mon Pays.” (Farewell My Country). It’s what launched my career in music.

Do you remember your first show?

Of course! I had entered a singing contest in Constantine. There were 10,000 people there and I won first prize. I only sang one song, but I remember stepping onstage. I was so scared that my legs were shaking but at the same time, I felt like I was home.

Is there a message that you hope to be remembered for?

Warning: the following song is likely to have you jumping out of your seat and shaking your hips suggestively. Click at your own risk.