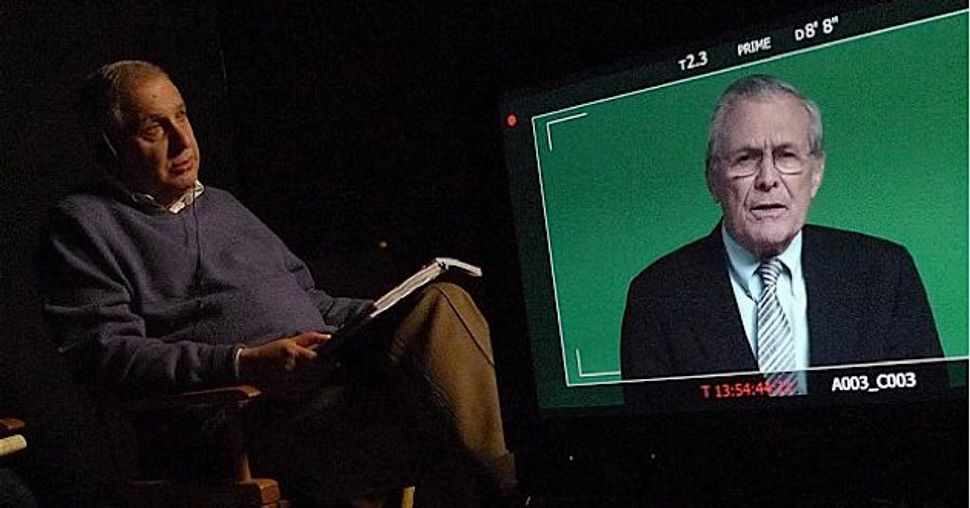 Academy Award-winning documentarian Errol Morris (“The Fog of War: Eleven Lessons From the Life of Robert S. McNamara”) has most recently turned his Interrotron on former Secretary of Defense Donald Rumsfeld for 33 hours of interviews in his new film, “The Unknown Known.”

When asked a question Morris’s brain ticks while he stares directly at you. He looks away while he considers each query and responds in a slow, thoughtful cadence. He goes quickly from serious furrowed brows to laughing. The Forward recently caught up with Morris to talk about Rumsfeld, responsibility and Abu Ghraib.

Dorri Olds: Do you think Rumsfeld comes across as likable?

Errol Morris: Yes, but liking him and approving of his policies are two different things. I could come away liking him, even being charmed by him but I was also appalled by him, appalled by the junk philosophy, the manipulation, the ruthlessness, the self-deception, the delusion.

Is he phony or does he still believe in what he did?

He’s phony but has no idea how phony he is. He believed what he said and says it as though that’s some final justification, as if that makes everything okay.

Did he take any responsibility at all?

Do you think he knew what was going on in Abu Ghraib?

I don’t know for sure. I used to think he had to have. But, as a result of spending all of this time with him, I don’t know. Did he know everything that was going on during his watch? Of course not. But that does not absolve him.

Can you describe his lack of responsibility?

I call it cluelessness, a disconnection. The movie is filled with his nonsense talk. He denies stuff, he’ll be corrected, he’ll ignore the correction. He professes ignorance about things he should’ve known about.

Do you believe he didn’t read the memos?

Do you think he hears your questions but deflects or is he unable to face what you’re asking?

Could be both. I read him the Schlesinger memo saying that these techniques might’ve migrated from Guantanamo. Right after he tells me, of course they didn’t. Then after he read the memo he said, “I agree with that.” It’s like there’s mush there, like battling with a wall of oatmeal.

What do you say to people who think his line about the “unknown known” is brilliant?

He asked questions about what we know and all kinds of incantations but in my [New York Times] [essay]1 I point out that isn’t the real issue. Say you know there are WMDs in Iraq and have evidence. Period.

Almost all of the terms he uses are vague and involve a slippery slope where they can mean one thing in one context and a completely different thing in another. “Absence of evidence isn’t evidence of absence” is a perfect example. There’s a lack of critical thinking about him.

Do you think Republicans believe we had evidence of WMDs?

The Republicans have taken an excursion in the last couple of years into what I consider craziness, atavistic social attitudes. If it isn’t abortion, it’s healthcare, and now it’s racism. But there is bipartisan idiocy. Democrats are perfectly capable of plunging this country into a disaster. The Vietnam War was done under the Democrats and subsequently under the Republican watch. By and large, killings took place after MacNamara’s watch. MacNamara had already left the Pentagon the last year of Johnson’s presidency and the killings continued way into the Nixon administration.

Why can’t Republicans see we went into the Iraq war under false pretenses?

Maybe they don’t care. Maybe they can tolerate Donald Rumsfeld saying that Barack Obama isn’t competent and comparing him to a monkey.

Rumsfeld was kind to me. He gave me his time and traveled to meet me in Boston. He supplied all of these memos and read them on camera. But, at the end of the interview I found myself really annoyed, angered by his glibness. What do you say about someone who is asked, “What did you learn from Vietnam?” and they answer, “Some things work out and something things don’t, that didn’t.” Yes, he’s clever, charming, interesting, entertaining and he is vulgar, empty and vain.

When Pam Hess asked him in one of his press conferences, “What if you can’t find any WMDs?” Rumsfeld said, “We know there were weapons of mass destruction!”

It’s a particularly powerful moment for me because it reveals the real Rumsfeld, not the Rumsfeld pedaling epistemology from Hell, his gobbledygook philosophy that pretends to be philosophy but is nonsense talk, Humpty Dumpty talk, Jabberwocky from “Through the Looking Glass.” It’s nonsense purporting to be non-nonsense but behind it all is dogma.