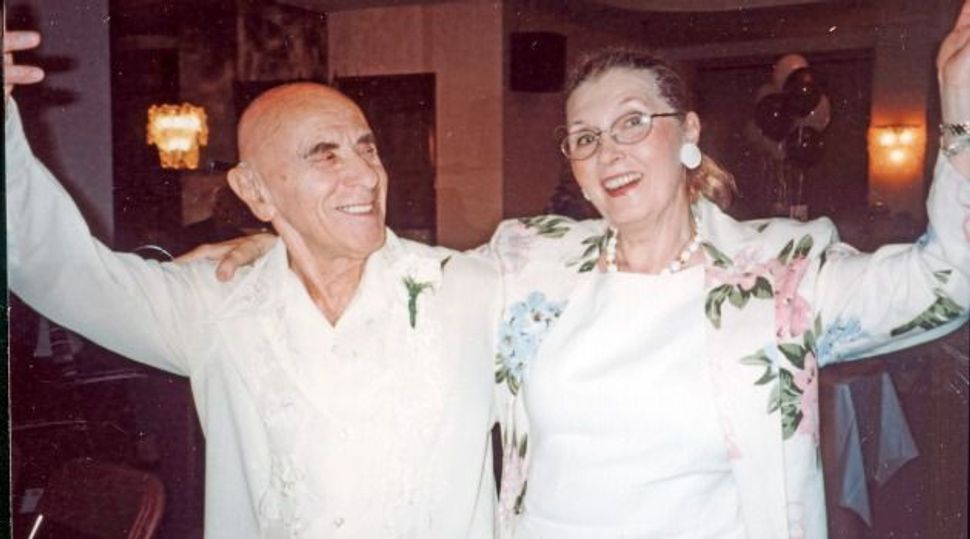 Whenever Warsaw-born dancer, choreographer Felix Fibich — who died on March 20, at 96 — and I would meet, we’d discuss Jewish choreography and sometimes end up dancing together.

The orchestra launched into horas and — at Fibich’s request — a polka. Felix pulled me onto the floor and as the tempo changed from a polka to one that he said was a Mazurka, I, Warsaw-born Polish dance maven — insisted hat it was a Krakowiak and Fibich settled the dispute declaring it an Oberek.

His lifelong passion and mission was Yiddish choreography and dance. He always spoke reverently of his wife —choreographer Judith Berg (who died in 1992) who had choreographed the Dance sequence in the 1937 classic Yiddish film, “Der Dybbuk” in which she dances the part of Death. The 1947 documentary film, “Mir Lebn Geblibene” (“We, the Living Remnant”) a documentary showcase of post war Jewish life in Poland, includes a dance sequence by — and featuring — Judith Berg and Felix Fibich.

Our last face-to-face conversation was during the reception at the Museum of Jewish Heritage — a Living Memorial to the Holocaust’s November 5, 2009 Generation-to-Generation dinner. We were savoring stuffed cabbage when Fibich suddenly rose out of his seat and — using his hands, arms and shoulders — announced he would “demonstrate the language of Yiddish dance.”

Looking younger than his 92 years, he explained: “My dance form is rooted in Jewish tradition. You praise the Lord with every part of your body…. men shoklen zikch (shake, shudder, side-to side). In the beginning I was told ‘You dance like a woman’ So I decided to observe how the Hassidim danced in their kapotes (long black coats). I observed the way Simchat Torah was celebrated….. I studied Russian dance in Turkomenia. (Judith and I) came to America in 1946. We knew no English…. We toured. But with dance you don’t need language.”

But it was in 2001, with the widely aired sidesplitting Cingular TV commercial, that Fibish got national visibility. Looking like a bald leprechaun in a black body-fitting leotard, he attempts to teach a group of 300 lb. football players how to perform plies (elegant balletic squats) and entrechats (a balletic feat that involves twice crossing your legs at the ankle in mid-air). He exhorts these gravity-bound Sumo size athletes “to strut- trut-strut like a peacock” to “walk like a camel in the desert” and “sway like a Redwood tree.”

Somewhere in himl (heaven) Fibich is no doubt teaching Yiddish-speaking malokhim (angels) how to flap their wings to a Hassidic cadence.