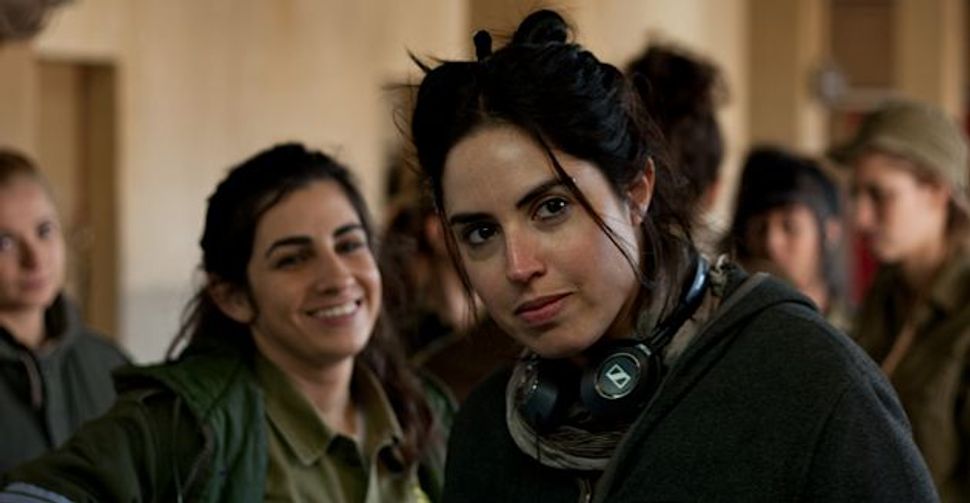 Movies about the army are usually about fighting, sacrifice, a tense atmosphere and people in uniform plotting war strategies. “Zero Motivation,” the first feature film by Israeli director Talya Lavie, shows a different aspect of military life: Set in an army base in the Israeli desert in 2004, it tells the story of a group of girls who spend their compulsory military service doing office work. Far removed from the frontlines and decision-making, Zohar (Dana Ivgy), her best friend Daffi (Nelly Tagar) and the other girls have time to worry about issues such as breaking the Minesweeper record on all of the office’s computers, dating male fellow soldiers and engaging in petty power struggles with their officer Rama (Shani Klein).

One day, a new arrival puts the friendship between potty-mouthed Zohar and fragile Daffi on trial, and events take a turn toward the turbulent.

The coming-of-age-tragicomedy had its world premiere at the Tribeca Film Festival on April 17, and will be released in Israeli cinemas in June. Director Lavie, who was born in 1978 in Petah Tikvah, Israel, first studied animation at the Bezalel Academy of Arts and Design before attending the Sam Spiegel Film and Television School, both in Jerusalem. She won several international awards for her thesis short film, “The Substitute,” which is also about young female soldiers in office jobs.

Like the characters in her film, Lavie was stationed in the desert during her army service. It was the contrast between the beauty of the desert and the aesthetics of the army that served as an inspiration for the movie, she told the Forward. She also talked about how her film reflects changes in gender-segregation in the army, and how hard it was to balance comical and tragic aspects of the movie.

Anna Goldenberg: How much of this movie is based on your own experience?

Talya Lavie: My own experiences are just inspiration. It’s not based on real events or real people but it’s inspired by real feelings and a real environment. While working on the film, my own experiences became more and more distant, and I researched a lot. I talked to a lot of girls.

Did these girls have any experiences in common?

Where were you stationed?

I was also in a base in the desert. Actually, one of my big inspirations was the desert. I like it a lot … The fact that it’s isolated and has constantly changing weather changes something in the proportion. And also, I think the scenery of the desert is beautiful and sometimes even divine. I want to put it in contrast with the aesthetics of the army. It’s something you can always see in American army films, and it creates something that I really liked a lot cinematically.

In the film, only women were doing office jobs. Does this reflect gender-segregation in army posts?

In the past 10 years, they have been trying to change that, and you can see some of those changes happening in the film. [For example] you can see that the girls are trying to do guarding [of the facilities]. This is something that starts to happen there. There are men in secretarial jobs, but in the film, I wanted to show just the women. It does not show the entire reality, because there are men in secretarial jobs, and also, there are women in combat. But it was my choice to have only women in the film.

Because of the group dynamics?

Yes, that kind of dynamic is something that I really experienced. It is so “not important,” as you can see in the film — always something bigger happened. They are the people in the background. I wanted to put them in the front.

When I saw those girls in the office jobs, I couldn’t help but think that this is just a waste of their time.

Did working on this change how you thought about your own experience?

I wrote the script from the place I’m in now. I used my emotions at that moment. It’s not like I go back in time. You know, the army is just a platform to tell the relationship story, the emotional story. Also, after the army, you find yourself in other frames, which can put you in some situations [like in the army] which put your friendship at trial.

You studied animation before you went to film school…

It was interesting because until then I was always working alone, making my own characters and doing all the roles. And then you discover the world of working with people. You need to learn a lot…

What was the most challenging lesson you had to learn?

To be understood. You know this song, “oh God, please don’t let me be misunderstood”? That’s the big difference between doing animation the way I did it, and doing film. And the biggest challenge [in “Zero Motivation”] was maintaining the tone of the film. It’s juggling a little bit between comedy — some real nonsense comedy because [the girls] are goofing around — to some really hard, dramatic parts, and painful stuff. I felt like an acrobat in a circus walking on thin rope, trying not to fall to any side … I had to deal with it through the entire filmmaking, from the script, the casting, the art design, the filming, the editing, the music, and until the design of the fonts [on the poster].