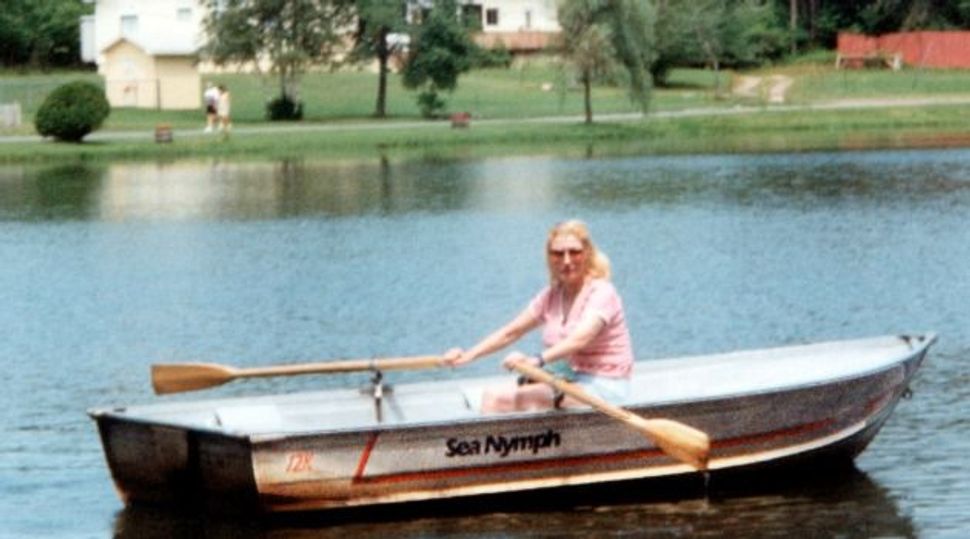 From the 1970s to my [last] stay at Kutsher’s in 1997, I remember it as a heymish Shangri-La — starting with the check-in welcome by owner Helen Kutsher.

A post-breakfast line-dance workout, then – trying to avoid the droppings of the resident Canadian geese on the lawn — a solo rowing session in a boat called “Sea Nymph” on the lake. With my Forward/Forverts bag slung over my shoulder, young families, native-born as well as Holocaust-survivor guests flocked to me. It was: ”My parents… grandparents read the Forverts.” Alluding to my bag one comedian got a recognition roar with “Every Friday night my father would come home from work and get to read the Forverts on the wet kitchen floor.”

The 1983 celebrity line-up included Joan Rivers, Ben Vereen, Billy Crystal, and [Italian] Connie Francis, whose Yiddish heart-wrenching version of “My Yiddishe Mame” had women in the room dabbing at eyes. In 1984 Jack Landsman, longtime Kutsher’s tumler welcomed me with “I read the Forward all the time” and introduced me to visiting lecturer and Kutsher’s regular — Judge Joseph Mazur of N.Y. State Supreme Court, who asked to be remembered to his longtime friend — the Forward’s then general manager, Harold Ostroff.

Comic Marty Brill, who told a packed nightclub that he was known to his barber as “Next!,” recalled an antique dealer who offered an authentic George Washington table for $12,000, noting, “you can see where he carved his initials into the Formica.” 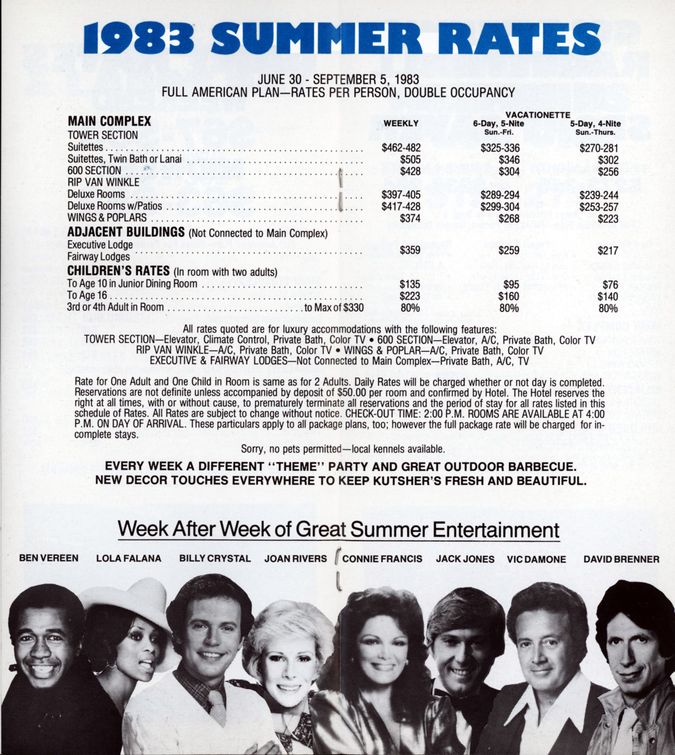 Regular iconoclast Robert Klein posited: “Somewhere in the Kutsher’s genealogy there was a Three Feathers who married Hiawatha Kutsher.” Like Klein, Lanie Kazan, a frequent performer, always shared the Kutsher family table in the dining room.

One summer my husband Joe and I were tablemates with Uri Lichter whose book “In the Eye of the Storm” described how his father (a bearded follower of the Belzer Rebbe!) and his two brothers, were saved by masquerading in German uniforms posing as engineers. Kutsher’s regular and Auschwitz survivor Siggi Wilzig — with his own table — boasted that he was the only Nazi concentration camp survivor to head a major bank (The Trust Company of New Jersey).

A 1995, headliner was roly-poly comedian Jack Eagle, whom I had known for many years. He was then appearing as Brother Dominic — a spokesperson for the Xerox TV commercial “It’s a Miracle.” Introducing me to the audience as “the Forverts lady” Eagle joshed: “Hear the one about the Forverts reporter who called in a late-breaking story with: ‘Moishe! Hold the back page!’”

By 1997, the hills were still alive with the sound of Yiddish and laughter as Kutsher’s — the last survivor of the once glorious Jewish Catskills—celebrated its 90th anniversary. That week’s line up included comic Pat Cooper (ne Pasquale Caputo) “The Italian Alan King.” Facing a mostly Jewish audience, he custom- tailored his spiel: “The Italian version of ‘Fiddler on the Roof’ is ‘Mandolin on the Porch.’ If Jews stopped eating Italian and Chinese, it would shut down two countries.”

In Myrna and Harvey Fromer’s book “It Happened in the Catskills” Helen Kutsher comments on the loyalty to guests: “If there is a room someone likes, you make sure they get it year after year…. To me this is not a business. It’s something I’ve grown up with…a way of life.”